The final suspect in a stabbing rampage that killed 10 people in and around a Canadian Indigenous reserve died of self-inflicted wounds after his car was run off the road by police on Wednesday following a three-day manhunt, officials said.

Myles Sanderson, 32, was found near the town of Rosthern in the province of Saskatchewan as officers responded to a report of a stolen vehicle being driven by a man armed with a knife, the Royal Canadian Mounted Police said.

Officers rammed Sanderson’s vehicle off the road, said an official who was familiar with the matter, speaking on condition of anonymity because the person was not authorised to talk publicly.

The official said the fugitive’s injuries were self-inflicted, but he didn’t have further details on when the injuries were inflicted or when he died. Video and photos from the scene showed a white SUV off to the side of the road with police cars all around. Air bags had deployed in the SUV.

Myles Sanderson’s death comes two days after the body of his brother, 30-year-old Damien Sanderson, was found in a field near the scene of their rampage, which also wounded 18 people. Police are investigating whether Myles Sanderson killed his brother. 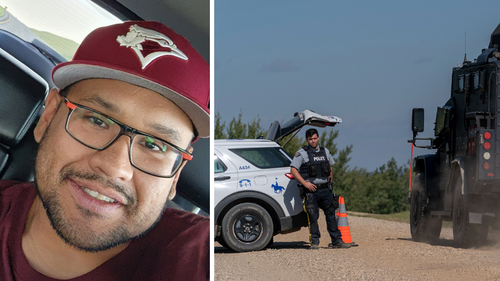