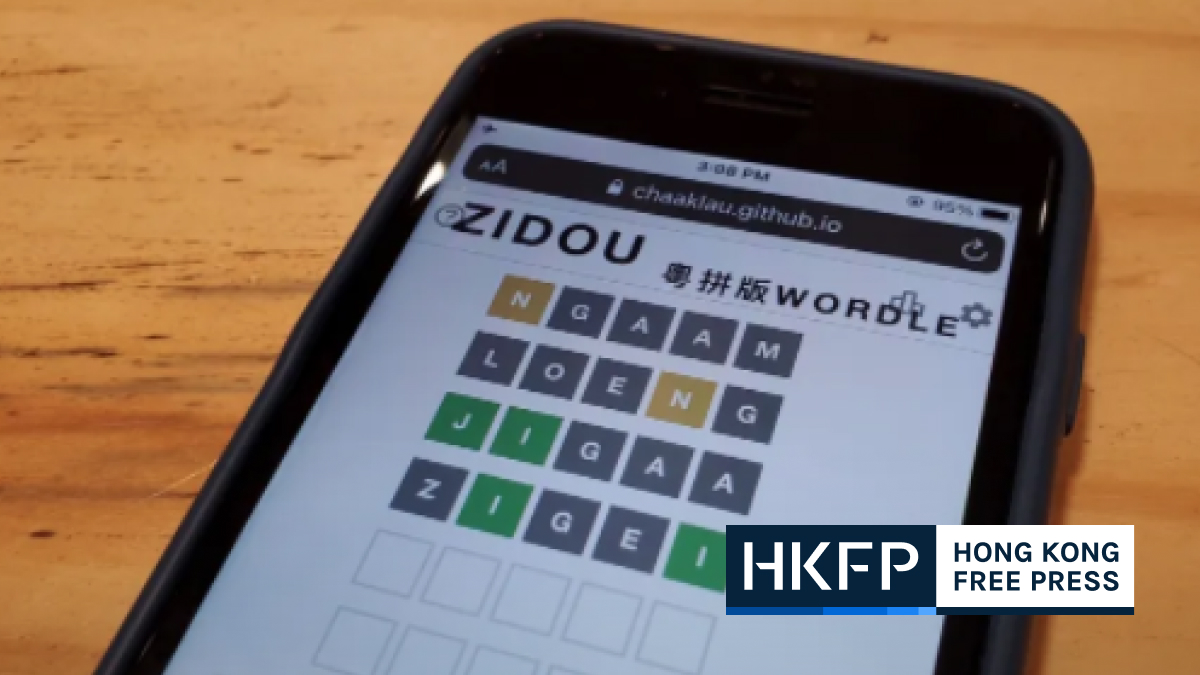 When cryptically coloured squares began flooding Lau Chaak-ming’s social media feeds earlier this month, the 37-year-old linguistics professor didn’t take much notice. But curiosity soon got the better of him, and it wasn’t long before Lau was waiting until midnight – when the daily puzzle refreshes – to play Wordle, the word game that has taken the internet by storm.

Last Friday, while eating breakfast at a local cafe with a co-worker, Lau realised that many of the items on the menu were Wordle-length. Things like saido (French toast), hofun (rice noodles) and gaafe (coffee) were all five letters long when written in Jyutping, a romanisation system used to spell out Cantonese words.

One of his friends had already made a variation of Wordle using Cangjie, a system for typing characters. Inspired, Lau, who works at the Education University of Hong Kong, also set out to make a puzzle variant in his native language. He called it Zidou, which means “know.”

Drawing on a comprehensive word list compiled during a previous project, a Cantonese dictionary he built seven years ago, Lau filtered out all the five-letter words and picked about 900 of the most common ones to be used as possible answers. Then, he input the words into Wordle’s open-source code.

“It was quite easy to make. I did it in three hours,” he told HKFP.

Lau’s Zidou is one of countless Wordle spin-offs created since the original game went viral. Josh Wardle, a New York-based software engineer, launched the puzzle last October as a gift to his word game-loving partner.

After Wardle added a sharing function to the game – allowing players to brag about their linguistic prowess – Wordle became an internet sensation. The puzzle’s allure lies in its simplicity: any five-letter word starts the game, with colour-coded tiles indicating how close to the answer players might be.

Zidou, too, has made the rounds online since its debut early on Saturday morning. On local forum LIHKG, people have been posting their grids of green, yellow and grey squares, and the link to the professor’s late-night creation.

“At first I thought I would be quite happy if there were just a few hundred people playing,” Lau said. But by the second night, there were already more than 10,000 plays. I’ve averaged over 10,000 each day. It’s quite exciting.”

The consensus, unsurprisingly, is that Zidou is tough. While non-native Cantonese learners are usually taught some sort of romanisation – either Jyutping or another commonly used system, Yale – native speakers are generally unfamiliar with spelling Chinese characters out phonetically.

The Jyutping for some words is straightforward – they are spelled how they sound. But others might be trickier.

In an LIHKG thread called “Cantonese Wordle is very difficult,” people expressed their frustrations over the game – though that didn’t stop many from trying.

“I googled a Jyutping list to help,” one user, who still used up all six tries before getting the answer, said.

Lau conceded that the game is hard. “The English Wordle is already difficult, and these are words that we look at and spell everyday. For us, we rarely see Chinese characters spelled out in Jyutping,” he said.

He lamented that the only romanisation system students learn at local schools is for Mandarin, not Cantonese. “It is sad that they are taught Hanyu Pinyin,” Lau said, referring to the name of the standard Mandarin romanisation system, “but nothing about their native tongue.”

Just for fun, and then some

Language talk aside, Lau said he created Zidou more out of his own personal interests than as an educational tool to promote Cantonese romanisation.

“I just thought it would be fun,” he said. “I didn’t make it as part of my language research, and it’s not related to my university work.”

Still, he hoped that people who play the game are not just randomly guessing, but are picking up a thing or two about Jyutping. Zidou has an additional feature that sets it apart from other Wordle variations – after a five-letter word is input, the game displays the respective Chinese characters so that players know the exact corresponding word. Because Cantonese is a tonal language, there is often more than one.

“If 100 people who play the game learn Jyutping, then I think that’s a good thing,” Lau added.