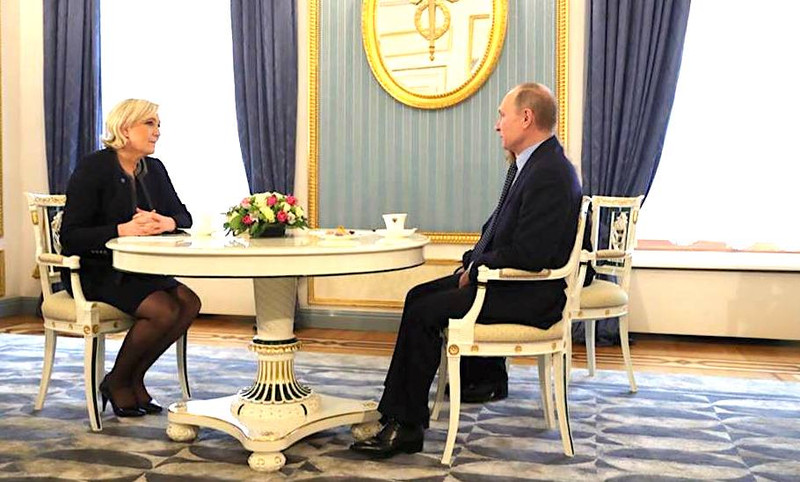 French president Emmanuel Macron has long had a comfortable lead in polls, but in the final days before Sunday’s (10 April) first-round of the election, far-right contender Marine Le Pen is closing in.

Her friendly ties to Russia don’t seem to bother French voters but her win would have profound implications for France and Europe.

A few weeks ago, Macron looked like a sure bet.

In the run-up to the vote, holding his first-and-only election rally last weekend, Macron urged caution, however, warning not to trust in forecasts which said it was impossible for him to lose.

“Just look at Brexit and so many other elections where a result seemed totally unlikely but then still happened,” the French president said.

And by the time the elections came around, Le Pen looked like a real threat — some polls going into the weekend now place her within the margin of error of winning the second round.

The Elabe Opinion 2022 poll on Friday had Macron on 51 percent and Le Pen on 49 percent.

The French election is taking place amid high tension in Europe due to Russia’s invasion of Ukraine.

Macron has repeatedly out pointed out Le Pen’s close ties to Russia in media interviews.

In 2017, Le Pen was hosted by Russian president Vladimir Putin in Moscow, Macron noted, in one example.

Her party, the National Rally, is also paying back a loan of some €9m from the Kremlin, which has attracted international opprobrium for civilian killings in Ukraine.

But Macron’s line was blurred by the fact he himself has frequently talked with Putin since the war broke out.

And while he turned to international affairs, she turned to French voters’ day-to-day affairs by talking mainly about cost-of-living issues.

Worries about purchasing power and how to make ends meet have become French voters’ main concern despite Russia’s war in Ukraine.

In other factors in her favour, Le Pen stands to benefit from no longer being the most extreme candidate in the running as she was in 2017.

That role now falls to the hard-right TV pundit Éric Zemmour, who makes her look mild by claiming that Islam and Islamism are the same things and by defending racist conspiracy theories, such as that of the so-called Great Replacement.

Meanwhile, if Macron and Le Pen qualify for the second round round-off vote, Le Pen might also get a windfall from the far-left and centre-right.

Far-left leader Jean-Luc Mélenchon has been gaining momentum and reached over 15 percent in polls, but a good chunk of his voters have said they would switch to Le Pen.

The election has been forecast to have a low turnout — more than 30 percent of the French have said they don’t intend to vote — making a Macron vs. Le Pen run-off more likely.

“Fewer people than ever see any point in voting,” Fourquet, the French pollster, said.

“After the traditional right and left crumbled in the last election, many voters have no obvious candidate to opt for,” he said.

Macron is widely perceived as the ‘president of the rich’ and a recent scandal over government spending on private consultancy firms cemented that view.

While some French voters from different camps see him as being too EU-friendly.

Over half of French voters intend to back eurosceptic candidates in the first round: Le Pen, Mélenchon, or even Zemmour.

But if Zemmour makes Le Pen look mild, her victory in France would cause political earthquakes.

She abandoned her plans to exit the euro and the EU — which made voters recoil back in 2017, but her manifesto still shows she could cause significant damage from within.

Le Pen would reimpose border checks and champion the primacy of French law over EU law.

She would increase national central bank powers in order to control debt and call for a radical overhaul of EU institutions, including the abolition of the European Commission.

And this time around she seems more confident than ever that she will make this a reality.:

“I truly believe that I will be elected president this time. This is not because I want to glorify myself but because I think the French people now see clearly what I stand for. I oppose the globalism of Emmanuel Macron, I am the candidate of the nation, ” Le Pen told EUobserver in January.