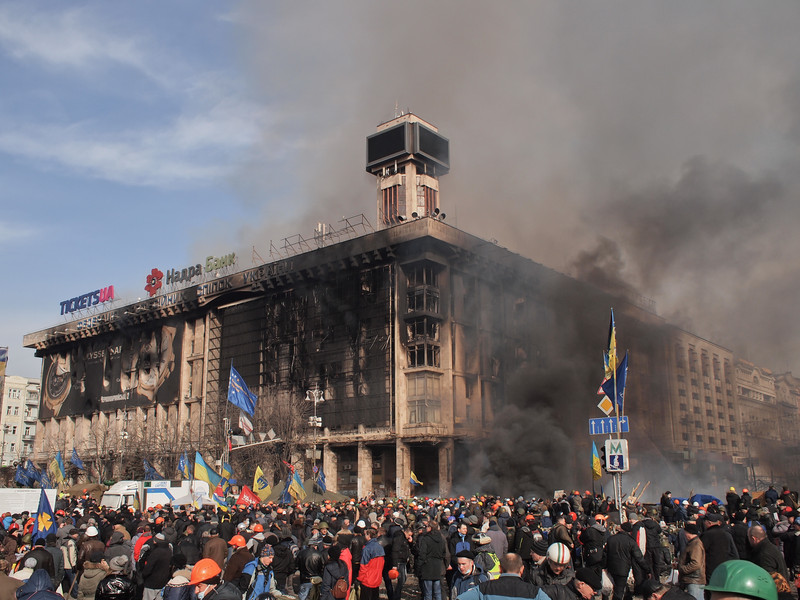 The lives of millions of civilians in Ukraine hang in the balance. The renewed threat of a war between Russia and Ukraine doesn’t bode well for millions of Ukrainians living along the contact line as heavy shelling has increased in recent days.

Residential buildings, including a kindergarten and a power station, were hit over the weekend and the number of ceasefire violations recorded by the OSCE Special Monitoring Mission has significantly increased between 18-22 February.

With Russian tank presence being reported in the outskirts of Donetsk and in non-government-controlled areas of Donbas, the spectre of a deadly war looms large. Against this backdrop, not enough attention has been given to the plight of civilians and the human cost of a new conflict.

Since 2014, Ukrainian civilians have borne the brunt of warfare and the ensuing impact. Eight years of conflict in the Crimea and Donbas regions have resulted in over 3,000 civilian casualties, often due to shelling or explosives left behind.

Around 1.5 million people have been internally displaced after being forced to leave their homes. Those who remained continue to face shortages of basic commodities, such as electricity and fuel, the destruction of houses and infrastructure, and physical and mental trauma.

These numbers could increase significantly in the event of a war. Earlier this month, the United States warned that a Russian invasion of Ukraine could result in up to 50,000 civilians killed or wounded and could force up to five million people to flee.

Waged in densely-populated areas, the war could cause immediate and massive numbers of casualties, especially if explosive weapons with wide-area effects are used. Destroyed homes, schools, hospitals, and critical infrastructure –electricity, water supplies, and roads – would deteriorate access to basic services, and in some cases make them completely unavailable. Large-scale or more intense hostilities could cause contamination of groundwater, soil, and air.

Combined, the effects of a confrontation could fuel a wave of population displacement in Europe unseen since World War II. Even if an attack is limited, the combination of kinetic and hybrid warfare would make Ukraine an especially complex environment, as Center for Civilians in Conflict (CIVIC) found through its research last year.

The targeting of essential infrastructure via cyberattacks and the dissemination of false information to fuel existing divides have exacerbated previous fear and trauma, increasing the vulnerability of hundreds of thousands of civilians.

The current military escalation between Ukraine and Russia has reopened the wounds of conflict. Ukrainians, like any other populations that have lived in conflict, have learned that war never spares civilians. They are preparing for the worst while trying not to succumb to panic. Some have begun making contingency plans; but local preparedness, including readiness of evacuation plans, still varies across communities.

A resident in Muratove Lahansk shared his concern with our team in the east of Ukraine: “In our community, we have vulnerable groups – elderly, low-mobility – who suffer most from the current situation. There is a need to prepare the civilian population. The current security situation warrants it.”

Another resident in Zolote was worried about the lack of shelters to seek refuge: “We have only one bomb shelter for the whole city. We didn’t think about war, we wanted peace. It is true when they say – if you want peace, prepare for war. This is exactly what we have now.”

The protection of civilians in war is an international obligation for the warring parties. Yet, commitments to reduce and mitigate civilian harm in the event of a renewed war between Ukraine and Russia have been insufficient.

While Kyiv has taken some steps to reduce civilian harm, it needs to take further action.

If war breaks out, the Armed Forces of Ukraine (AFU) needs to ensure that good practices and policies in civilian harm mitigation developed over the past few years are directly integrated into any military response. The government of Ukraine also needs to instruct all forces to comply with international humanitarian law and make the protection of civilians a priority during military operations.

Now is the time to show Ukrainian civilians that they should never be unavoidable collateral causalities of war.

All parties involved in a potential confrontation have a role to play in the protection of civilians.

All actors should conduct an immediate review of their rules of engagement, tactics, and procedures related to operations, and adjust tactics to reduce civilian harm as well as issue new directives on ways to minimise civilian harm and damage to civilian objects.

International partners of Ukraine, including Nato, the United States, the United Kingdom, Canada, and other allies, should ensure human security and protection of civilians are essential components in potential preparedness measures for any large-scale confrontation.

They should also support Ukraine’s efforts in prioritising the protection of civilians in current preparedness efforts.

As Russian military forces are present in the east of Ukraine, the risk of increased numbers of civilian casualties has never been higher. Russia and all armed formations it controls and supports in non-government-controlled areas should commit to fully comply with international humanitarian law, including avoiding indiscriminate attacks on civilians and civilian infrastructure.

The human cost of a renewed war between Ukraine and Russia would be too high to be ignored.