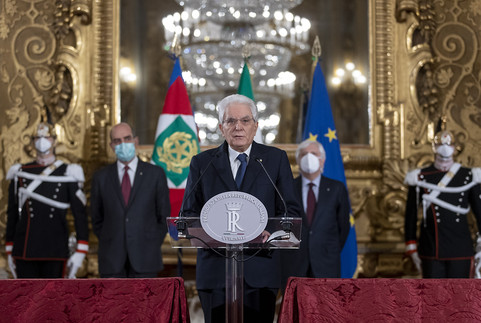 In the heart of Rome, the Quirinal has been Italy’s most important palace for centuries. First, as the residence of the popes, then of the House of Savoy, and since 1946 it has been the seat of the presidency of the republic. In recent years, it has once again become Italy’s temple of power.

Italy is a parliamentary republic: the post-fascist constitution of 1947 is wary of an over-powerful head of state or government.

But with the nationwide investigation into political corruption of 1992 known as ‘Mani pulite’ – and the consequent collapse of then mass parties – as well as a succession of political crises, the role of the president of the republic has become increasingly important.

Two examples are Giorgio Napolitano – nicknamed ‘King Giorgio’ because he was president for almost nine years, from 2006 to 2015, a one-off in the history of republican Italy – and incumbent Sergio Mattarella, who was decisive in the rise of Mario Draghi as prime minister.

“The presidents of the immediate post-war period had a lower profile, the leading role was played by the political forces,” says Marco Follini, a Berlusconi-era deputy prime minister.

“Over time, the function of the president has become more and more crucial. Partly because presidents have chosen to interpret their mandate in a way that is not merely notary-like. And partly, and most importantly, I would say, because the parties that dominated the political arena until a few years ago have lost much of their influence”, Follini added.

The head of state is elected by the members of parliament – Chamber of Deputies and Senate gathered in a single session – plus a number of representatives from each region.

Electing a president from one’s own political area represents a huge opportunity: more and more, it means influencing the general policy and balance of the country.

So, who will the 1,008 ‘great electors’, as MPs and representatives of the regions are called, elect in January?

They are unlikely to reappoint Mattarella, who has made it clear that he does not want to be re-elected.

Yet the Draghi-Mattarella pairing “has been phenomenal, also in relaunching Italy’s image internationally,” notes Antonella Seddone, associate professor of political science at the University of Turin.

“An example of this was the Quirinal Treaty signed by Macron and Draghi in front of Mattarella. Such international convergences have been found because two figures like Mattarella and Draghi reassure. They make other countries, and also the markets, feel that they can rely on Italy”, Seddone said.

For much of the Italian press, the perfect candidate for the presidency is Draghi. Some commentators are even calling for changes to the Constitution to make his actions more effective.

“With the exception of a few scattered critical voices, the media are completely focused on the praise of Draghi, who is represented as the saviour of the country and the panacea for all the ills of the republic,” says Francescomaria Tedesco, professor of political philosophy at the University of Camerino.

“This is a grotesque attitude, a sinister fascination with technocracy. It should be unnecessary to recall how silly, and dangerous, the idea of the single man in charge is. All the more so if that one man is the result of an endogamic reproduction of the ruling classes”, Tedesco said.

Part of the Italian political spectrum would be happy with Draghi in the Quirinal. It would be a way of prolonging an all-too-comfortable phase, in which it gets the benefits and visibility of power, but it lets Draghi and his advisers the responsibility of governing.

According to former prime minister Matteo Renzi it is up to the Italian centre-right to elect the head of state: Napolitano was a leading member of the Italian Communist Party until 1991, and Mattarella is a left-wing Christian Democrat.

Matteo Salvini, leader of the far-right party League, would like to see former prime minister Silvio Berlusconi elected. But for many parts of the left and of the public opinion the idea is unacceptable.

Chunks of the centre-left, among them Five Stars Movement’s leader Giuseppe Conte, are calling for the election of a woman.

It would be the first time in Italian history.

“Unfortunately, I believe the gender card might be played in an instrumental way, to appease political actors unable to agree on the most substantial characteristics that the president of the republic should have,” states Fedra Negri, a political science researcher at the University of Milan.

“It would not be a choice dictated by the desire of seeing a woman in an apical position, at last, but by the need to cover a decision-making gap”, Negri said.