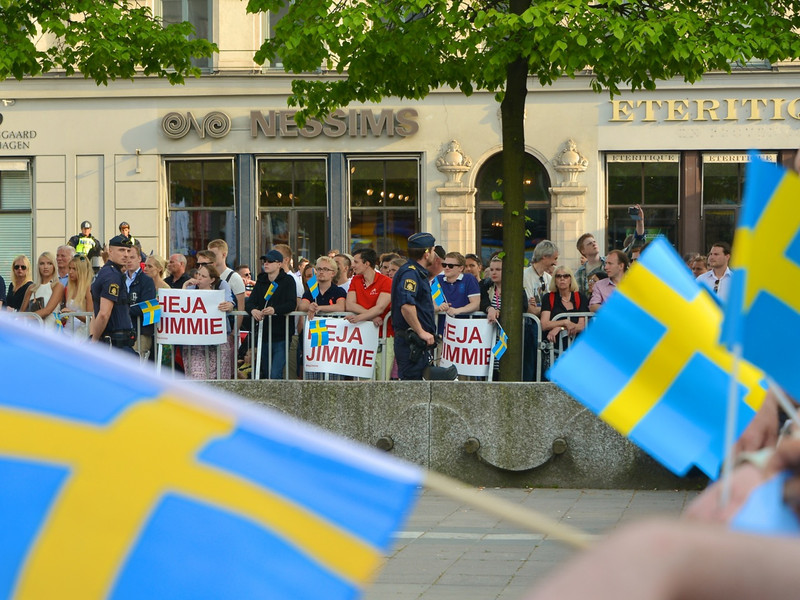 Sweden is often hailed — and scorned, not least by Russia and pro-Trump Republicans — as a liberal utopia. The Nordic country has led the way on issues like gay marriage, women’s rights, paternity leave, and refugee rights.

During the current election campaign, however, Sweden has taken a sharp and surprising turn to the right. Keen on seizing power from the ruling Social Democrats, the conservative block has sought the aid of a far-right party, the formerly neo-Nazi Sweden Democrats (SD).

Does this signal the beginning of the end for European liberalism and tolerance? The Social Democrats have even singled out the SD as a threat to domestic security. Could they still become part of a new Swedish government?

With only 48 hours until the general election on Sunday (11 September), seen as the most important for the small but influential nation in decades, the race is so tight that it’s impossible to predict a winner.

So far, the debate is dominated by pressing national issues all close at heart for the right-wing block: gang crime, law and order, immigration.

National newspaper Expressen on Thursday published a story revealing that the EU-sceptic SD, currently the second-largest party in the polls, is represented by racist, even Nazi-sympathising individuals.

A scoop to upend the election? Hardly. Such news are an almost daily occurrence with the chosen partners of the right-wing block.

The frequent media exposés of SD politicians arguing for a race war or the mass killing of Muslims do not necessarily equate a negative effect on potential voters. Often, it just strengthens the party’s standing.

This may beggar belief, but the loss of shock value is evident in the ‘business as usual’ atmosphere of the election as it draws to a close.

The Sweden Democrats have steadily polled ahead of the country’s conservative party, the Moderates [Moderaterna], founded in 1904 and Sweden’s second-largest party counted in parliament seats.

Party leader Ulf Kristersson has faced heavy criticism for his choice of running mates, not least because of his public promise to author and Holocaust survivor Hédi Fried to “never, ever” collaborate with the former neo-Nazis.

Kristersson has also faced criticism of a more practical nature; instead of strengthening his party, the partnership has led many right-wing voters straight into the arms of the Sweden Democrats.

The conservative block currently constitutes the Moderates, the Sweden Democrats, the Christian Democrats, and the Liberals, with the latter only holding around five percent in the final week of polling.

The parliamentary threshold for representation is four percent. A reasonable price to pay for the staunchly anti-racist party to compromise its DNA by relying on xenophobes, critics say.

Both the Moderates and the Liberals have adopted this strategy for purely tactical reasons, says Jenny Madestam, a political scientist at the Swedish Defence University.

Cooperation with SD seems the only way to win power. Certainly, segments of centre-right parties and their voters agree with this turnaround, even ideologically. But the majority probably do not. To win power, they simply have to swallow this very bitter medicine. Whether it benefits or harms them in the long run remains to be seen.

Elsewhere in Europe, rightwing populist parties have lost voters or disappeared altogether as more established conservative parties take over their agenda. This does not seem to be the case with the Sweden Democrats. Why?

Quite a lot of these European parties had a longer period of acceptance to begin with, says political scientist Jonas Hinnfors at the University of Gothenburg.

In Norway, Finland and Italy, rightwing populists have been part of different government coalitions for years. SD (who first entered parliament in 2010) are still not accepted by several Swedish parties, and so far haven’t been anywhere near government power.

Should they receive such an invitation, it carries a tangible risk for the Swedish populists. As they become part of the establishment, it can be quite difficult to uphold both populist rhetoric and outsider status. An important part of their image is based on being the people’s representatives against the so-called ‘corrupt elite’.

Is there any limit as to how big the Sweden Democrats, currently polling at around 20 percent, could grow? Certainly, they so far seem immune to scandals that would risk crushing an established mainstream party.

We will have to wait and see, says Hinnfors. But if you’re part of a government, it could well be more difficult to handle that sort of scandal. As for how big they could be, they are not likely to reach 40 or 50 percent; these parties often stay at around 20 percent, their current polling.

There is also a limit, says Hinnfors, to how far they could push their ‘white nationalist’ agenda and instigate more far-reaching societal change. Studies show that core Swedish values are not particularly conservative.

Voters can buy into the Sweden Democrats’ call for a tougher stance on organised crime, for example. But SD isn’t likely to get the same response for a general move towards an authoritarian society.

Countries like Poland and Hungary have a large societal acceptance of rightwing conservatism, says Hinnfors. But Swedish values have generally moved steadily in an anti-authoritarian direction since the 1940s and 1950s, with strong support for issues such as abortion, gender equality and LGBTQ rights.

And what about the potential risk the Sweden Democrats could pose to domestic security?

The timing adds to such concerns, with a major European war raging in Ukraine and its instigator, Russia, inching closer to dictatorship by the day.

Sweden is particularly vulnerable at this point, existing in an uneasy limbo between announcing its application to join Nato back in May, and being accepted as a full member of the Western military alliance.

Most political scientists EUobserver spoke to say they have a hard time judging whether SD pose a threat as potential pro-Russian actors in Swedish politics or not.

It is, however, obvious that the Sweden Democrats realise that such accusations can become very troubling for them, says Madestam.

For this reason, it might well be that the party will make a greater effort in the future to distance themselves from Vladimir Putin. Their ambition to be a part of Sweden’s highest decision-making sphere is much greater than any need to be vague about foreign and security policies.