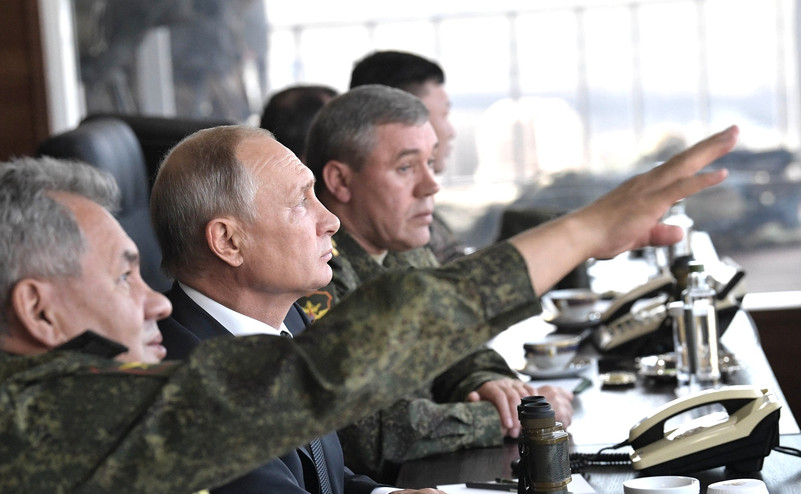 Within hours of the Russian invasion of Ukraine before dawn on Thursday (24 February), gas prices soared.

Benchmark Dutch futures shot up 41 percent to €125 per megawatt-hour following the news that Russian forces attacked targets throughout Ukraine.

Shortly afterwards, the EU announced plans for the toughest sanctions on Russia it has ever imposed.

On Thursday night, EU leaders will decide whether those those will include sanctions that drive up European energy prices even further.

That also led to an immediate price spike on Tuesday and Wednesday, driving up prices from €72 to €88 per megawatt-hour.

Such volatility is fuelled by a basic fact: that the EU still gets around 40 percent of its gas from Russia. And there are real fears — and preparations underway — in the event that the Kremlin might retaliate by cutting off supply.

“We will have to see what EU governments are prepared to do if Russian gas runs out,” said Niclas Poitiers, a trade expert at Breugel, a Brussels think tank. “What seems impossible now may suddenly become politically feasible,” he said, referring to the possibility that some member states could continue burning coal for longer than originally planned as part of climate commitments.

Countries like Latvia and the Czech Republic are 100 percent reliant on Russia, while wealthier EU member states like the Netherlands and non-EU Norway have access to domestically-produced gas.

Putin has meanwhile sought to assure Europe that Russia intends to keep “uninterrupted supplies” flowing during a Forum of Gas Exporting Countries on Tuesday (22 February).

In a flurry of recent dealings, the European Commission has tried to snare other gas suppliers, with Nigeria, Japan, Korea and Azerbaijan now “ready to step up,” a commission spokesperson said Wednesday.

But no big announcement has been made yet. And in any case, shipped LNG will not be enough to safeguard the European economy from forced shutdowns.

“Higher natural gas prices have an outsized impact on industrial production,” Rico Luman, a financial analyst at ING said, with agriculture, food production and plastics and chemical and steel industries most vulnerable.

In the short term, most costs would be shifted to consumers, raising costs of living for already hard-pressed households.

Moreover “future gas prices indicate that the crisis is expected to continue for at least the next two years,” Ember, an independent think tank, wrote in its energy review in January.

“It is hard to predict what will happen exactly,” Luman said. “It all depends on political choices.”

In the worst-case scenario of a prolonged halt of gas supplies, gas suppliers wouldn’t be able to rebuild their inventories over the summer when less natural gas is used for heating homes.

Industries would have to shut down and “energy rationing would be inevitable,” said Chris Wheaton in a statement, an oil and gas expert at Stifel, and that “would be disastrous for the European economy.”

This month, the Association of German Chambers of Commerce and Industry rated energy prices as the biggest risk for 85 percent of all companies in the industrial sector.

Top European smelter Aluminum Dunkerque, in France, had to lower output in December, Bloomberg reported. Nyrstar, the world’s second-largest zinc processor located in northern France also had to close in December because of a continued high price for gas in 2022.

Producers of specialised chemicals, plastics and fertilisers from Spain and Slovakia to Italy and the Netherlands have also had to shut down, leading to rising prices for a wide range of consumer products.

Effects differ by country, but the Dutch National Institute for Budget Information expects Dutch citizens on average will lose at least €40 a month in purchasing power, and that kind of effect could eventually force governments to take drastic measures.

Dutch climate and energy minister Rob Jetten recently said he will have to double controversial gas extraction in the earthquake-afflicted northern part of the country, which will lead to more damage in a region where many people already had to leave their homes.

On Tuesday (22 February), former Russian president and now deputy chair of the country’s security council, tweeted: “Welcome to the brave new world where Europeans are very soon going to pay €2,000 for 1,000 cubic meters of natural gas!”

Whether Medvedev’s precise figures pan out, his threat may still portend the kind of effects that will be most felt by EU citizens in central and western Europe as the conflict in Ukraine, to the east, takes its course.