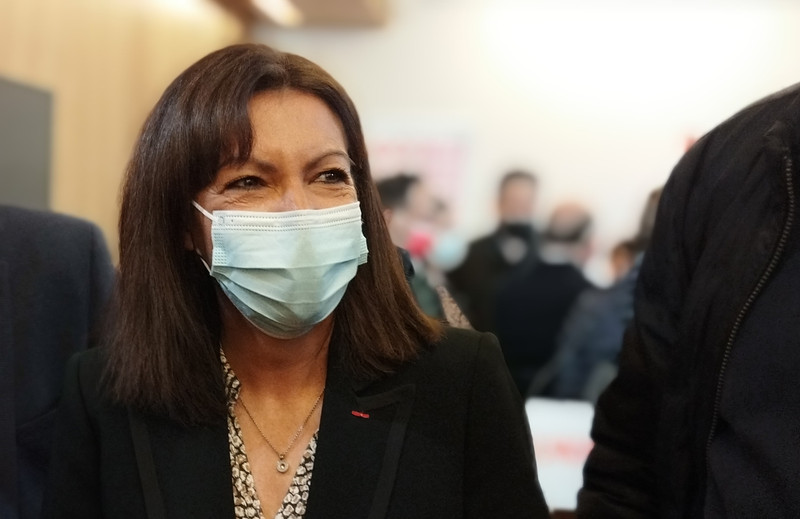 Anne Hidalgo, the socialist candidate to become the next president of France, is meeting the press at the Jean Jaurès Foundation in central Paris.

Jaurès, an historian and socialist leader who lived in late 18th and early 19th century Paris, is considered one of the founders of what would become modern French socialism.

But, now, Hidalgo may be presiding over the party’s collapse.

She is not used to being such an underdog.

In 2020 she was elected mayor of Paris for a second six-year-term in an alliance with the Greens. And she’s become something of an international superstar for having done so much to make her city a model for a greener and cleaner urban future.

Paris has carved up roads to squeeze in bike lanes and trees, opened routes along the banks of the River Seine to cyclists and pedestrians. By 2024, a huge chunk of the heart of Paris will be car-free. By 2026 more than 170,000 trees will be planted across the city, and by 2030, 50 percent of the city is set to be covered by planted areas.

And as a presidential candidate, she’s insisted that she’s the only candidate who can unite the French left.

Yet the evidence suggests otherwise.

In the run up to the first round of voting in April six other leftist candidates are running — and four of them are beating her in the polls. Hidalgo is garnering a meagre two percent of the vote (according to a 22 February 22 Ifop survey).

Mainstream French newspapers have described her as unelectable, a dying star, and the most frequent question she faces is, why doesn’t she drop out of the race?

“I am confident that the dynamic will change,” Hidalgo told Euobserver at the Jaurès foundation event in early February. “People know that I am a doer and stand by my word,” she said.

That may be part of the problem: her marquee policies have earned her contempt and admiration in equal measure.

There are many French voters in rural areas where there are long commutes with high levels of dependency on cars. And they do not share Hidalgo’s cosmopolitan outlook and environmentalist priorities.

In many cases these are regions where the Yellow Vests protest movement of 2018 gained traction after president Emmanual Macron, in an early misstep in his presidency, moved to increase fuel taxes.

Hidalgo says Macron fumbled that fuel tax decision. But she stands by the “absolute necessity” of acting on fossil fuels and she says that allowing “cars to keep destroying the environment and our citizen’s lungs would be a crime.”

Hidalgo, who was born in Spain and became a naturalised French citizen at age 14, also continues to vaunt traditional leftist ideals that include actively fighting bigotry and xenophobia.

“I do not believe in abandoning our ideals,” she said. “I defend social justice and solidarity. Anti-migrant, wall-building positions are not compatible with me.”

To be sure, Hidalgo is not solely responsible for the party’s downfall.

In the 2017 presidential election, Socialist candidate Benoît Hamon scored only 6.2 percent in the first round of voting.

And during president Francois Hollande’s presidency from 2012 to 2017, the French Socialist Party already was fracturing into sharply polarised radical left and more centrist wings.

Hamon was supported by leftist socialists, while the centrists backed then prime minister Manual Valls — a strong proponent of law-and-order and other policies more commonly associated with the right wing of politics.

Valls had presidential aspirations, too. But when he crashed out of the socialist primaries in 2017, he refused to support Hamon. Valls instead opted for Macron, a former socialist minister, and his start-up pro-European party, La Republique En Marche.

Valls, who was also born in Spain, then left France, unsuccessfully running for mayor of Barcelona. He now is back in Paris and unapologetic about his choices.

Sitting on a barbed-wire fence

“C’est fini, there is no future for a party with outdated ideas,” Valls said of the French socialists under Hidalgo. Europe needs to protect itself and “not be afraid of walls and barbed wire,” Valls, who was speaking at a bistro in central Paris, told a small group of journalists.

Now Valls seems to be open to a position in the government that emerges from the April presidential elections, where currently Macron is a strong favourite to prevail for a second five-year term.

“France needs to look forward, and of course I would like to contribute in one way or another,” said Valls.

To be sure, social democracy has been strengthening in other parts of Europe, such as Spain, Portugal, Germany and the Scandinavian countries.

And those signs of rejuvenation also help to explain Hidalgo’s stubborn optimism.

Hidalgo says she takes particular inspiration from Spain where her counterparts in the country’s socialist party, the PSOE, are governing in coalition with the anti-austerity Unidas Podemos alliance. She also looks to the German SPD, who are in a coalition in the federal German government with the Greens and liberals.

“We know that many voters want a just, green and feminist leadership,” she said. “This has been shown locally and regionally in recent years, where Socialists have a stable support.”

“Everyone seems eager to put a nail in the coffin of the Socialist Party but we are here to stay,” she insists.

But Valls, the erstwhile prime minister and socialist hardliner, says those models, particularly in Spain, are far from ideal if the French socialists are seeking to rebound.

“A reasonable French Left would take inspiration from the Social Democrats in Sweden or Denmark, a bold left who dares to take measures against migration,” said Valls.

When asked if left voters perhaps abandoned the Socialist party because its policies were no longer left at all, but centre-right, he shakes his head.

“The left needed to be reshaped,” he said. “I do not believe La République en Marche is solid either,” he said, referring to Macron’s party.

“Only the future holds the answer for the French left,” he said.