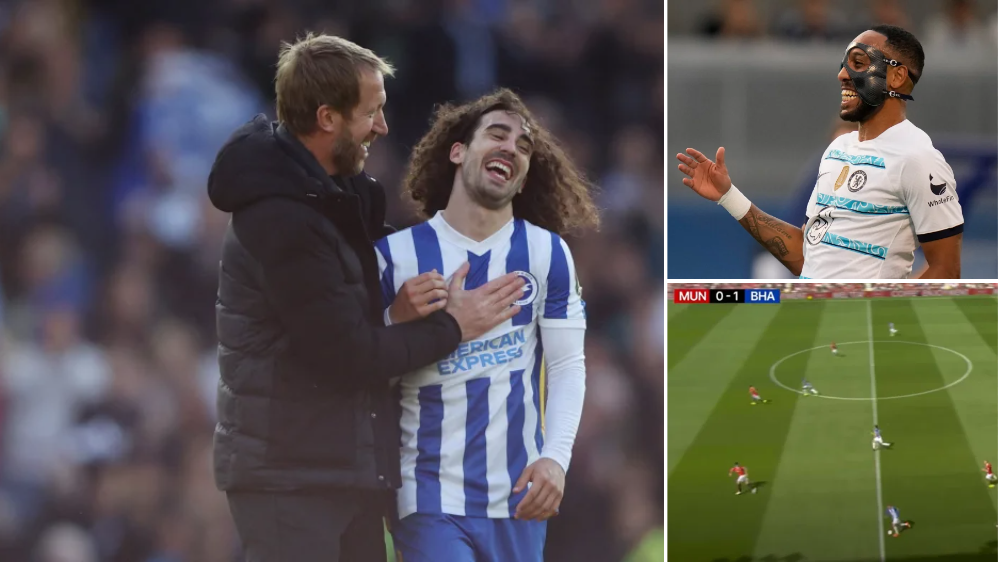 Graham Potter, Chelsea manager? It would not have seemed possible a few years ago, but the in-vogue Brighton boss could soon be the man to replace Thomas Tuchel at Stamford Bridge.

Chelsea are believed to have met with Potter over the newly-opened vacancy, having sacked Tuchel just seven matches into the new season.

With new Chelsea owner Todd Boehly evidently carrying on Roman Abramovich’s hire-and-fire approach to head coaches, the jury is out on whether Potter should take the role if he is offered it.

The final decision could lay with Potter himself, and though there are pros and cons to the move, few would deny that the man who started his managerial journey in Sweden has not deserved his shot at coaching a Big Six side.

Chelsea, too, may see the value in appointing a manager whose style is not too dissimilar to Tuchel’s despite the German’s spell in charge ending in disappointing fashion.

What is the Potter way?

Potter has favoured a 3-4-2-1 formation since the backend of last season, in which time Brighton have lost the influential Marc Cucurella (ironically to Chelsea) and Yves Bissouma but also beaten Manchester United twice.

This formation relies on two defensive midfielders, in a double pivot, supporting the back three but also working in tandem with the other two midfielders in front of them, making for a tightknit quartet that are often encouraged to form a box and constantly be aware of each other’s positioning.

That system allows for Potter’s key duo, his wing-backs, to thrive, with a greater license to stay forward and kick-start Brighton’s counter-attacks as opposed to forming a flat back five when defending.

There are points when the wing-backs essentially operate in the forward line, and this was seen in the opening-weekend win at Manchester United, with Leandro Trossard (at left wing-back) starting the counter that led to Pascal Gross (Brighton’s right wing-back) scoring the second goal of their 2-1 win.

Potter’s aggressive wing-backs can often result in the back three becoming stretched, however, as was evident for Leicester’s opening goal on Sunday, but when sitting back the double pivot is often there to plug the gaps and make the back line difficult to penetrate.

All this does not mean Potter will stick with 3-4-2-1. He has shown a fluidity regarding formation over the years and has sometimes operated with a back four. The philosophy, however, often remains the same: defend as a unit, focus on positioning, play out from the back, and counter-attack quickly.

Potter is not all about numbers and formations, though. He places a great importance on how “emotional intelligence” can get the best out of a squad as well.

“When I started to look further into the course around emotional intelligence and leadership, it seemed to be quite a powerful aspect to take into coaching,” Potter explained to the Coaches’ Voice.

“I’d had a bit of trial and error, but this was a way to just theorise some leadership concepts: self-awareness, empathy, responsibility, motivation, building relationships, are all things you need when you’re coaching.

“As much as you need to know about football, you need to know about people as well, that can be the difference. How you can communicate as a team, how you can understand each other, big things in football and it’s not just about the Xs and Os, the numbers, formations, drills, practices, it’s about how you can get that team to function together, motivate individuals with that group to understand their role and others, and come together for a common cause.”

This was echoed by one of his former players, with Brwa Nouri named captain under Potter at Swedish side Ostersund.

“He’s not only a football coach. He’s probably one of the best men I’ve ever met in my life,” Nouri told ESPN.

“[Potter] is so emotionally intelligent in his way of interacting [with] people, making you welcome and developing you.

“He is skilful in so many areas. You have to experience him yourself, but for me, he’s incredible. And I feel so grateful. After what I’ve been through, how far down I’d been, I never thought I’d be able to achieve anything like this. It’s hardly fair to put it into words.”

And it is not just Potter’s past players who are wedded to his ways. Both 31-year-old Danny Welbeck and 34-year-old Adam Lallana have been regular starters at Brighton this season, and have credited their boss for his diligent approach to coaching.

“If you look at the way the team is playing and how we are going into matches there is no stone left unturned on what he wants us to do out there on the pitch.”

Lallana added: “Graham, from my experience with him, is a really deep thinker. Him and his staff do 12-hour days which you need to do if you want to be the best, you cannot leave any stone unturned.

“There are so many different dynamics to the team you need to look at. You’ve got a squad of 25 players, each of which are at a different stage in their career and life with different problems, but Graham and his team really do cover all bases.”

Who could benefit at Chelsea?

One of the more immediate points made after Tuchel’s sacking was the fact Chelsea got rid of him just days after Pierre-Emerick Aubameyang was signed to reunite with a coach he played under at Borussia Dortmund.

So is Aubameyang doomed under Potter? Not necessarily.

The Brighton boss brought the best out of Welbeck and does not always rely on his No 9 to rush back and defend, meaning Aubameyang could yet be suited to the role that Potter may present to him.

The more pertinent question would be whether Potter makes wing-backs out of wingers or full-backs. Reece James feels like an obvious choice for the right-sided wing-back, it is a role he has played under Tuchel, while on the left it could be Cucurella, Ben Chilwell, or even a more attacking-minded player.

Potter in fact ended the 2021-22 season by playing Cucurella as the left-sided centre-back at Brighton, with Trossard or Solly March in front of him, and so the Spaniard could line up in that defensive position with Chilwell ahead of him at Chelsea.

That would leave Thiago Silva, Wesley Fofana, Kalidou Koulibaly and Cesar Azpilicueta vying for two roles, although their strength in depth makes rotation likely as well.

Beyond N’Golo Kante, Mateo Kovacic and Jorginho – a trio who rarely seem to be all fit at the same time – battling it out for the double-pivot roles, the greatest intrigue beyond the two wing-backs is what Potter’s potential arrival would mean for Raheem Sterling.

Mason Mount would appear to be a perfect fit for Potter’s system, and he could soon find himself operating closely with Sterling, who could tuck in as a No 10 as opposed to playing false nine or out wide.

Meanwhile, Conor Gallagher and Ruben Loftus-Cheek are versatile midfield options, while the jury is out on Kai Havertz, Hakim Ziyech and Christian Pulisic. Arguably Havertz would simply contend with Aubameyang and Armando Broja for the forward role, but the German could slot into attacking midfield as well – so long as he is prepared to track back.

The same could be said for Ziyech and Pulisic, although perhaps Potter would view them as wing-backs-in-making? Get ready to run, lads.