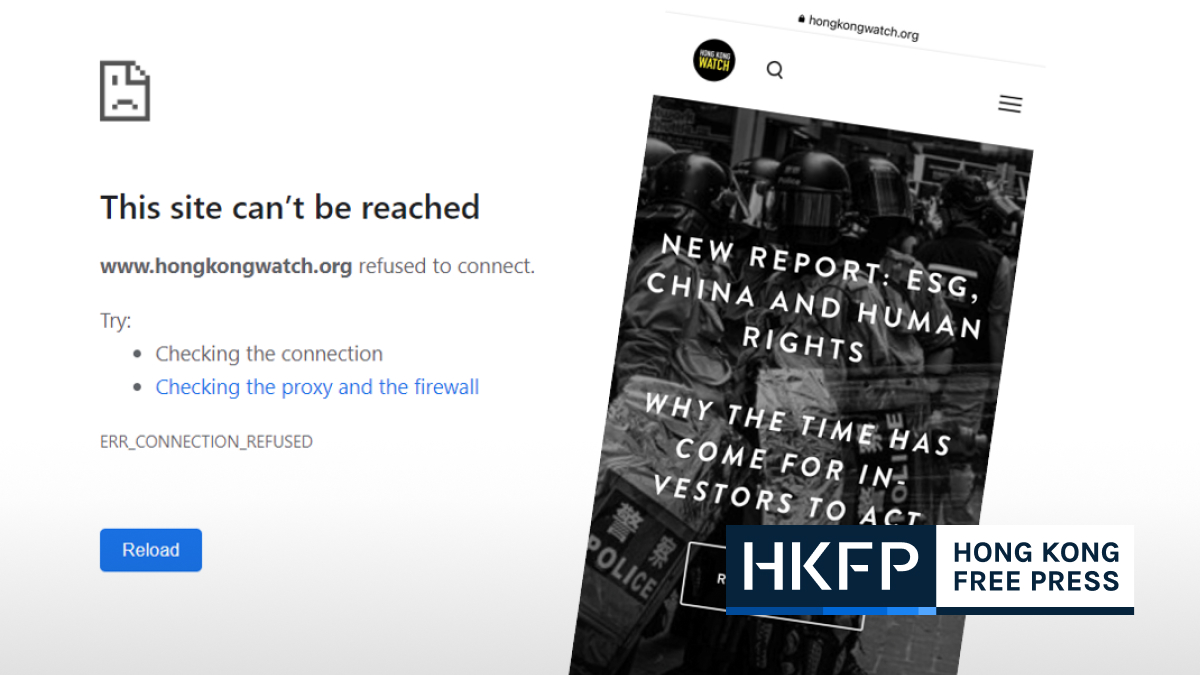 The website of NGO Hong Kong Watch appears to have been blocked in Hong Kong amid fears of rising internet censorship in the city.

The UK-based NGO’s website is the latest to have become inaccessible, alongside a handful of pro-democracy and Taiwan-linked websites. However, the Hong Kong Watch site was still accessible via VPN circumnavigation tools when tested by HKFP on Tuesday.

The CEO of Hong Kong Watch Benedict Rogers said in a statement that the city’s future as a financial hub depends on access to information. “If this is not just a technical malfunction, and Hongkongers will no longer be able to access our website because of the National Security Law, then this is a serious blow to internet freedom,” Rogers said.

“With the steady drip of website removals, there are fears that China could begin introducing its Great Internet Firewall into the city. With time this could have serious ramifications for the continued presence of western technology companies in the city.”

Last May, access to anti-government website HKChronicles was blocked. The site collected information during the months-long anti-extradition protests in 2019 and operated as a pro-democracy doxxing platform, revealing personal information of police officers and pro-Beijing supporters. It highlighted cases of alleged police brutality.

Websites for Transitional Justice Commission, and HK Charter 2021 also appear to have been previously blocked.

HKFP has reached out to the security bureau, as well as PCCW, Smartone, HKBN, 3 Hong Kong and China Mobile for comment.

In June 2020, Beijing inserted national security legislation directly into Hong Kong’s mini-constitution – bypassing the local legislature – following a year of pro-democracy protests and unrest. It criminalised subversion, secession, collusion with foreign forces and terrorist acts, which were broadly defined to include disruption to transport and other infrastructure.

The move gave police sweeping new powers, alarming democrats, civil society groups and trade partners, as such laws have been used broadly to silence and punish dissidents in China. However, the authorities say it has restored stability and peace to the city.

Article 43 of the security law gives police the power to order an individual or service provider to delete or assist in the removal of information published online in the interests of protecting national security.

Meanwhile, a doxxing website targeting pro-democracy protesters, as well as journalists, remains accessible in Hong Kong, seven months after HKFP alerted the authorities to its existence through media enquiries. Since 2019, the HK Leaks website has openly maintained an online database of personal data belonging to more than 2,000 Hong Kong democrats, protesters and journalists.

ID card numbers, headshots, home addresses and phone numbers are often included. Historically, the site has been hosted on Russian servers and promoted by groups linked to the Chinese Communist Party.