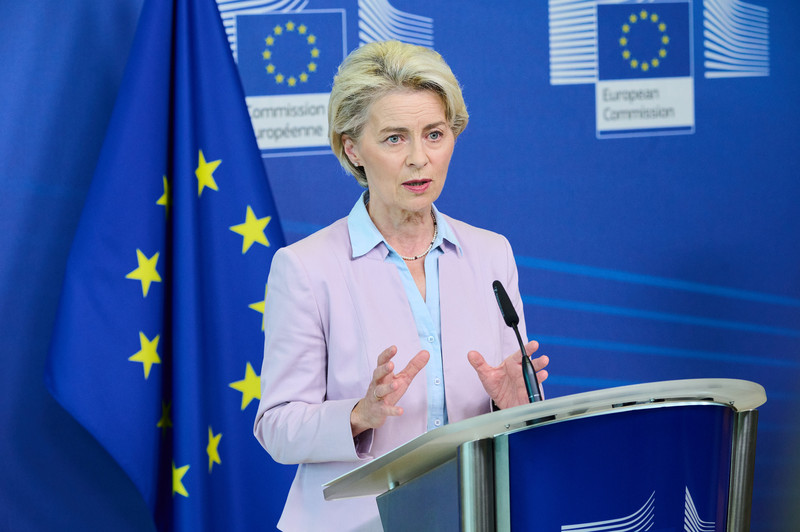 The European Commission on Wednesday (7 September) unveiled a package of measures designed to tackle skyrocketing energy prices in the EU, immediately prior to a crunch meeting of EU energy ministers on Friday.

The new EU energy plan includes a mandatory target to reduce electricity consumption during peak hours, a cap on the excess revenues made by renewables and nuclear energy, a solidarity mechanism to channel the massive profits of fossil fuel firms to citizens, and a temporary state aid framework to provide liquidity support to companies.

“We must cut Russia’s revenues which Putin uses to finance this atrocious war against Ukraine,” she said.

The EU has been the largest buyer of Russian energy since the invasion of Ukraine started, with imports accounting for over €84bn, according to a recent analysis.

The EU’s so-called non-paper underlines that a price cap on liquified natural gas (LNG) could divert imports away from Europe, undermining security of supply — although senior commission officials said that the bloc is exploring setting its own price benchmark for LNG.

LNG import prices have also been increasing recently, putting under pressure one of the EU’s main alternatives to Russian gas.

The five ideas presented by the commission will be discussed by EU energy ministers during an energy emergency meeting taking place on Friday.

The price cap on Russian gas imports appears to be one of the most controversial proposals — since some member states see it as another form of sanctions against Moscow.

The commission said the price cap on Russian pipeline gas would still allow purchases since the cap would apply “at the moment of the import, leaving price formation for the sale of gas within the internal market unaffected”.

But the Czech industry minister Jozef Sikela responded on Wednesday that the price cap on Russian gas was “not a constructive proposal” because it is a different way of sanctioning Russia.

“We don’t want to prepare more sanctions now, but rather solve the situation with energy,” CTK news agency quoted Sikela as saying.

The cap will also likely be opposed by Hungary, since Viktor Orban’s government has already said they are unwilling to support limits on gas imports. Budapest last week signed a new deal with Russian-controlled energy giant Gazprom to buy more gas — a move at odds with the commitment to phase out Russian fossil fuels.

One way to meet these targets could be to introduce a system of auctions and bids on the amount of financial compensation that different consumers would need to cut consumption, , the commission said. Such a measure would require compensation from national budgets.

The EU plan favours a “smart savings of electricity” while acknowledging that electricity demand is expected to increase due to, for example, the electrification of road transport.

A draft of the final proposal proposes setting the cap on non-gas generated energy at €200 per megawatt hour and a mandatory five-percent electricity-reduction target during peak hours.

But final details are expected to be unveiled by the commission next Tuesday.

Meanwhile, Russian president Vladimir Putin said on Wednesday that his country will turn the gas tap off if a price cap is imposed on imports.

Under the existing market rules, gas sets the overall electricity price, but several member states, including Spain, France and Greece, have called for decoupling electricity prices from the gas market.

The commission, however, repeatedly said that proposals on structural reform of the bloc’s power market might take a few months to come to light.

Following the pandemic, energy prices already increased at the end of 2021 and throughout 2022 — with gas as the price-setter, average electricity prices in the EU reached €405/MWh in August 2022.

This represents a phenomenal 532-percent increase compared to January 2021, according to Eurelectric, which represents more than 3,000 facilities.