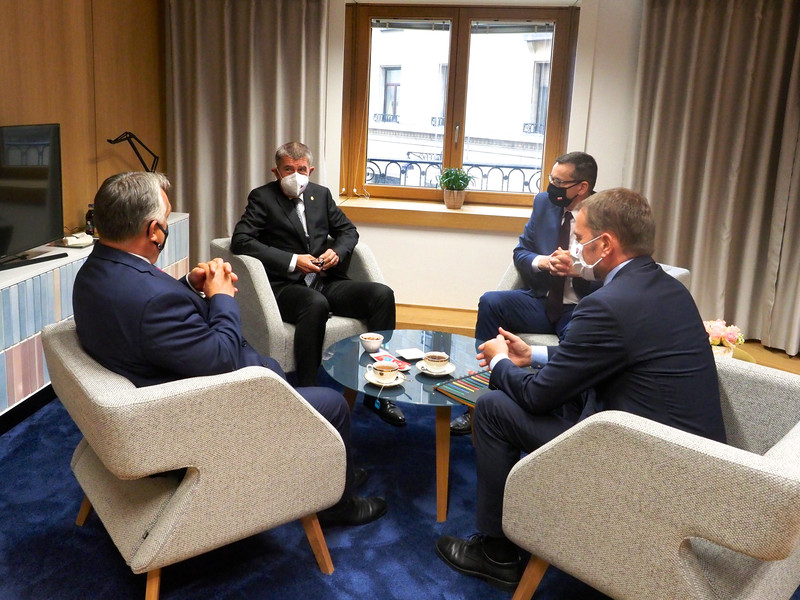 EU ambassadors have been negotiating a deal on the EU’s oil embargo against Russia over the weekend, but Hungary has vehemently opposed the new energy sanctions.

While Hungary is not the only country voicing serious concerns over its energy security in light of the possible Russian oil ban, its stance highlights how far Budapest has drifted away from its European allies, including the Visegrad Four. And especially Poland.

“This is the lowest point the V4 cooperation has reached in decades,” Veronika Jóźwiak, senior analyst at the Warsaw-based Polish Institute of International Affairs, told EUobserver.

Top-level Visegrad meetings have not taken place since the V4 leaders met UK prime minister Boris Johnson in London in March, which was organised by the British side.

“The difference in Russia policy has firmly and visibly divided V4 countries since 2014, and this has escalated since the start of the war,” Jóźwiak said. “Until Russia’s aggression against Ukraine, V4 countries mutually accepted that there is a difference between them on Russia, even Hungary’s stance which did not consider Russia a security threat and security risk,” he said.

The regional cooperation club of the Czech Republic, Hungary, Slovakia and Poland, which was founded in 1991, has, in recent years, been an increasingly visible lobby group within the EU when it came to their common interests.

However, Russia’s invasion of Ukraine, the raw historical nerves it has hit in three of the V4 countries — all four which were under Soviet rule during the Cold War — has become incompatible with Hungarian prime minister Viktor Orbán’s close ties with the Kremlin and his pro-Russian tendencies.

Since the Russian invasion in February, Visegrad ministers have called off meetings with their Hungarian counterparts due to Budapest’s stance on the war.

While the Czechs, Poles and Slovaks — and the Baltic countries — are at the forefront of EU efforts to provide Ukraine with political, military, and humanitarian aid, Hungary does not allow allies to deliver weapons to Ukraine through its territory and Orbán has described Ukrainian president Volodymyr Zelensky as his opponent.

At a lower level, cooperation will continue on EU policy issues, but the V4 is not expected to behave as a coherent lobby group any longer. “It does not mean the end of the Visegrad group,” Jóźwiak said.

“The regional cooperation will continue, but outside the region, their cooperation will be very uneven and dependant on the issue at hand,” Milan Nič, a senior fellow at the German Council on Foreign Relations, also told EUobserver,

“Visegrad will survive everything,” Nič said, adding that for one, there is no alternative group of alliances within the EU for these four countries to join.

Nič said that Russia’s invasion could become a game-changer for the dynamics with the group.

With the Czech Republic taking over the EU presidency in July and Slovakia leading the V4 in the second half of the year, a deep divide between Warsaw and Budapest means Orbán can no longer hijack the Visegrád group in an effort to build a regional pillar against the German-French architecture.

For Hungary, on the other hand, Visegrád cooperation can provide important help in terms of diversifying routes to access energy resources — if it decides to get off the Russian oil and gas dependency. “But Orbán’s government does not seem to be open to that,” Jóźwiak said.

No axis with Poland

While Hungary and Poland have been close allies, bilateral relations now between Warsaw and Budapest “are at an absolute low point,” Jóźwiak said. It is possible that some cooperation on rule-of-law issues, where the two countries are under EU scrutiny, will continue, however.

“It turned out that contrary to expectations in Warsaw, Orbán has not changed his position on Russia after the April general elections,” Jóźwiak said, adding: “I don’t see how high-level meetings can continue without a change in Hungary’s position.”

“For Poland, Hungary’s position is incomprehensible, not only for politicians but also for the society,” Jóźwiak said.

“There has been a false illusion fed by politicians in recent years that Poland and Hungary see the world in the same way. But suddenly it turned out that there are fundamental differences, and it created disappointment and anger in Poland,” she explained.

Morawiecki said that the V4 format still existed, but “we need to clarify very thoroughly the issues related to Russia’s aggression towards Ukraine.”

“We fundamentally disagree with Hungary’s attitude towards Ukraine today and we expect an unequivocal and very strong position from Budapest, condemning the Russian crimes in Ukraine,” Morawiecki was quoted as saying by the PAP news agency.

Nič said Poland understood that this was a geopolitical moment, when you have to define where you stand. Warsaw interprets Orbán’s close ties with Moscow as not only undermining Ukraine, but also undermining Polish security interests, he added.

Further isolating Orbán, he has lost important allies in the region: Andrej Babiš, failed in the Czech Republic, and Janez Janša also lost his prime minister’s seat in Slovenia.

Meanwhile, Balázs Orbán, a deputy minister in Orbán’s government, said in an interview with Hungarian news site 24.hu on Monday (9 May) that Hungary’s position on the war is closer to Germany’s or France’s than to Poland’s or the Baltic states’.

“Within the Visegrád co-operation, it really causes tension how the war is perceived. We do not want to drift into the war and we do not want to endanger Hungarians. Others have different perspectives,” he said.