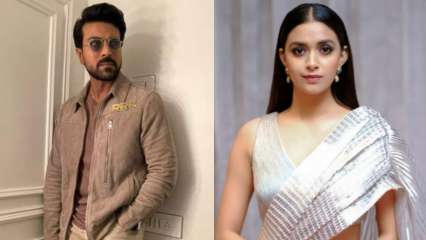 Ram Charan and Keerthy Suresh, who were on stage at the event, performed the iconic step “Naatu Naatu” from Rajamouli’s upcoming magnum opus “RRR”. As the audience cheered, it was a feast for the eyes to see the duo perform the most famous dance move.

The video that surfaced on social media shortly after the stars matched up dance moves and captivated audiences has now gone viral.

Meanwhile, during the event, Ram Charan mentioned that his father Chiranjeevi was supposed to attend the event as he always wanted to cheer on the team – “Good Luck Sakhi”.

Chiranjeevi’s recent Covid infection is the reason why Ram Charan had to take his father’s place at the event.

Billed as a female-focused storyline, “Good Luck Sakhi” is gearing up for a theatrical release on January 28. Nagesh directed the film, which is produced by Shravya Varma and Sudheer Chandra.

While Keerthy Suresh stars as a villager, Adi Pinishetty, Jagapathi Babu, and others in prominent roles in “Good Luck Sakhi.”