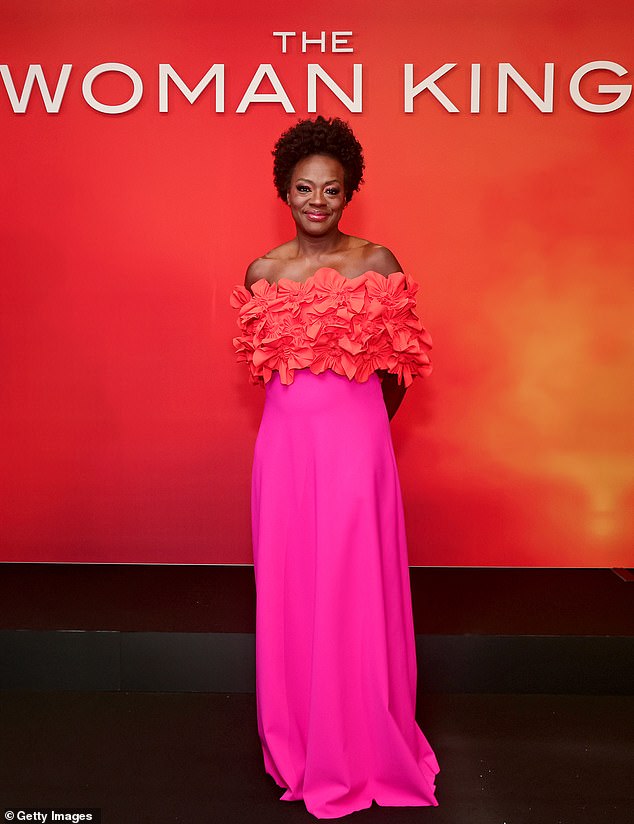 Viola Davis is more than proud of her latest film project entitled The Woman King, which had its grand premiere earlier on Friday at the Toronto International Film Festival 2022.

The 57-year-old Academy Award winner turned heads in a striking floor-length dress as she posed for photos on the star-studded red carpet.

The historical epic is based on true events from the kingdom of Dahomey, Africa’s “most powerful states in the 18th and 19th centuries,” according to the official synopsis on IMDB.

Breathtaking: Viola Davis, 57, caught the eye when she attended the screening of The Woman King at the Toronto International Film Festival earlier on Friday

The talented actress opted for a colorful ensemble when she attended the premiere of her latest historical drama.

Viola slipped into a hot pink floor-length dress with orange floral fabric lined at the top of the dress for an extra pop of color and different texture.

During an earlier interview with InStyle, The Help star shared her fashion inspiration.

“In general, I’d say my style still reflects who I was in New York, which is, I always just wanted to be different.”

Glamorous: The award-winning star was dressed to impress at the premiere of her latest film project

To coincide with the glamorous strapless dress, Viola slipped into a pair of bright pink high heels that shone in the light.

In order not to take away from the liveliness of the dress, she chose not to add any jewelry.

Her makeup was elegant and chic, including black eyeliner, shimmery eyeshadow and a pink lipstick.

On the red carpet, Viola posed with fellow cast members and other creative artists involved in the film project. She was also seen walking hand in hand with her husband, Julius Tennon, and their adoptive daughter, Genesis Tennon.

The talented beauty seemed to be in a good mood as she celebrated the premiere of The Woman King. Before the screening during the film festival, she let it be known that the historical epic has a special place in her heart.

Big smile: The star looked cheerful when she attended the screening of The Woman King in Toronto earlier on Friday

Celebrate: Viola was pictured with director, Gina Prince-Bythewood and fellow actress in the film, Thuso Mbedu

Viola then said that she has finally gotten to know who she is, and her latest project has helped her on that path.

“And so you often allow other people to define you. At the age of 57 I have come to realize that I can define myself.’

The talented actress revealed that she believed deep down that The Woman King was her, ‘magnum opus’, adding: “But it’s my magnum opus, because it’s everything I ever dreamed it could be.’

A magnum opus is an important, creative work of art, or is sometimes referred to as an artist’s most important work.

New Project: The Woman King not only plays the Oscar-winning actress, but was also produced by the star

Her magnum opus: The star explained during her impassioned speech that the film was her ‘magnum opus’

‘I see your viola. I see every chocolate girl that’s like you. I’m telling you to stop running. This is my gift to you.’

“And I believe that when we open this gift tonight, it will be to your delight,” she said at the end of her speech, which was followed by applause and cheers.

Happy Family: The How To Get Away With Murder alum was pictured holding hands with husband, Julius Tennon and daughter, Genesis Tennon on the red carpet

Big Day: Viola posed with her co-co-star in the movie The Woman King, John Boyega

The Woman King features not only Viola, but also Hero Fiennes Tiffin from the After franchise, Lashana Lynch, John Boyega, Thuso Mbedu and Sheila Atim.

After the special screening during the film festival, the historical drama will be shown in cinemas on September 16.

Viola plays the character of Nanisca, who trains and leads an all-female combatant unit to protect their kingdom of Dahomey.

During a recent interview with Vanity Fair, the actress opened up about diving into her character.

Talented: The Oscar-winning actress snapped a photo with some of her co-stars, Sheila Atim, Thuso Mbedu and John Boyega

Proud: Viola said he was proud to be part of the project and stated that film was ‘transformative’

‘I’ve never had a role like this. It’s transformative. And to be a producer of it, and to know that I’ve had a hand in bringing it to fruition,” she explained.

Aside from The Woman King, the actress was cast to play the role of Amanda Waller in the DC movie, Black Adam, and will also star in The Hunger Games: The Ballad Of Songbirds And Snakes.

She has also been cast to be a part of a movie currently titled Nike, starring Ben Affleck and an old friend, Matt Damon.