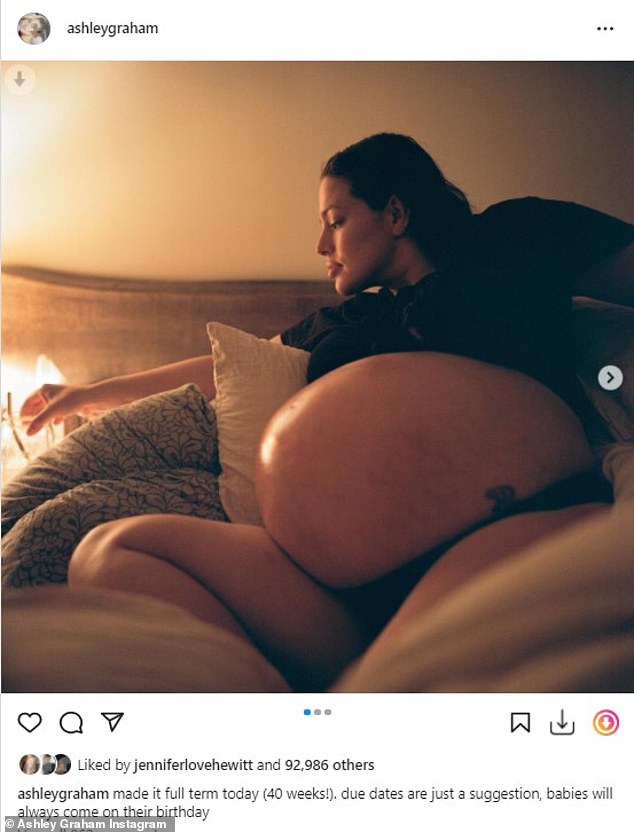 Since the start of her pregnancy, Ashley Graham has openly shared updates about her journey to motherhood with her followers on social media.

The 34-year-old model – who is awaiting the birth of twins with her cinematographer husband Justin Ervin, 36 – again posted new photos of her ever-expanding baby bump on Saturday.

The star enthusiastically shared that she was nearing the latter part of her pregnancy, writing, “He reached full term today (40 weeks!)”

Final stretch: Ashley Graham, 34, took to Instagram to share new photos of her ever-expanding baby bump on Saturday, letting her followers know she had reached her term with her twins

The expectant mother didn’t seem to be worried about the timing of her pregnancy, adding: “Due dates are just a suggestion, babies will always come on their birthday.”

In the candid photos, she is seen lying in bed, wearing a black t-shirt and matching underwear.

The snaps – which have moody yellow lighting – show the American model’s nascent belly.

Not Stressed: The model didn’t seem to care about the timeline of her pregnancy, writing in her caption, “Due dates are just a suggestion, babies will always come on their birthday”

Intimate: In candid photos, we see her lying in bed with a black t-shirt and matching underwear

Graham appears to be makeup-free in intimate shots that see her relaxing and lying on an assortment of pillows and blankets.

In one portrait, the heavily pregnant star has a hand to her face, looking slightly tired as she enjoys the later stages of her pregnancy.

In another shot, the beautiful brunette’s hair is pulled back slightly as she takes a pot of water.

Pregnancy burst: In another photo, the beautiful brunette’s hair is pulled back slightly as she takes a pot of water

Friends and followers were thrilled for the mother-to-be, with one writing: “Wow, this must literally be a record for twins! that’s how you, you never do anything halfway haha. ‘

Another added: “You are a QUEEN. I am in total awe.

Graham met her filmmaker husband in 2009 while volunteering at his church. The two got engaged in June 2010 and tied the knot in August of the same year.

The beauty and her husband welcomed their first child, Isaac Menelik Giovanni Ervin, in January 2020.