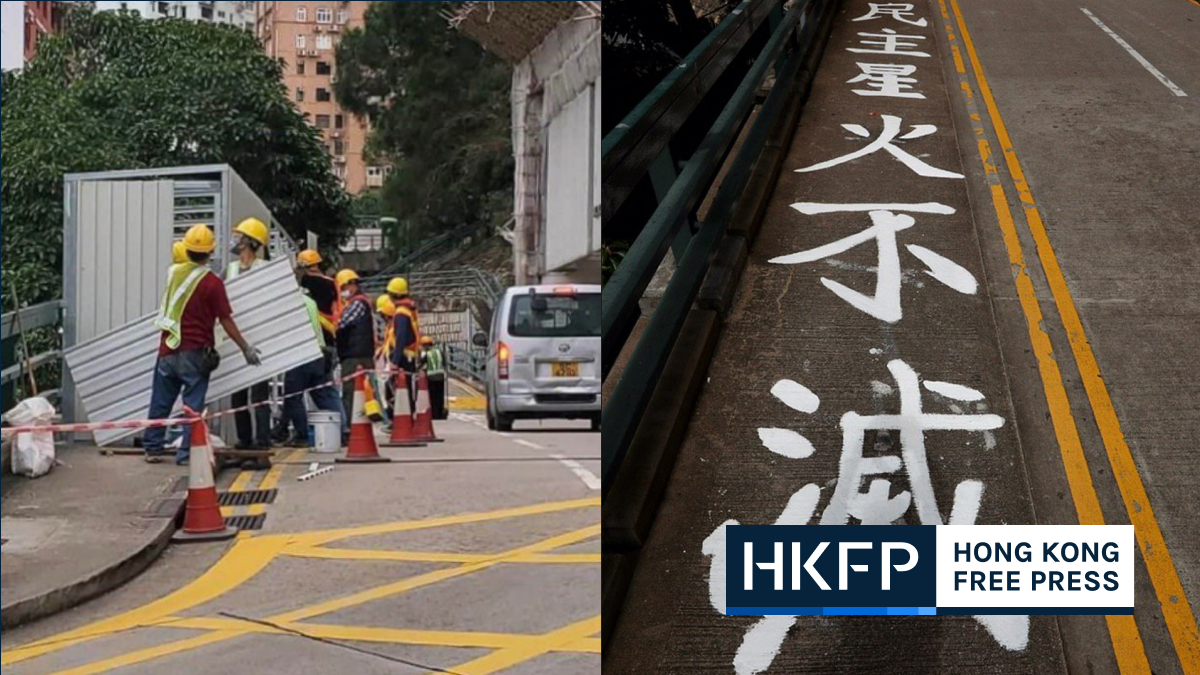 Workers at the University of Hong Kong (HKU) covered up a segment of a bridge dedicated to the Tiananmen dead on Saturday morning, weeks after the school’s removal of a statue commemorating the deadly crackdown attracted international condemnation.

Metal panels were constructed to shield the part of Swire Bridge, located outside a dormitory, that bears the white painted slogan. The area was cordoned off by tape.

The operation took place in broad daylight, without public notice, three days ahead of Lunar New Year, with students and staff away on break. Fewer than 10 reporters were present, one journalist tweeted.

Residents at Swire Hall painted the slogan on the bridge after the Tiananmen crackdown in 1989. A bloody military intervention ended months of student-led demonstrations on June 4 that year. It is estimated that hundreds, perhaps thousands, died in Beijing when the People’s Liberation Army cleared the protests.

Every year since then, HKU students have retouched the slogan leading up to the anniversary. The 20-character inscription reads: “Souls of martyrs shall forever linger despite the brutal massacre; Spark of democracy shall forever glow for the demise of evils.”

In a statement emailed to HKFP on Saturday afternoon, school authorities said: “The University of Hong Kong regularly conducts maintenance works at various locations and facilities, with the above site being one such project.”

Louisa Lim, a veteran China reporter-turned-scholar who has authored books on the crackdown, tweeted: “An educational institution that fears the power of words, in a place governed by those who fear the weight of history #pillarofshame.”

The handpainted slogan was the last remaining tribute to the Tiananmen crackdown at HKU, the city’s oldest university. Last month, school authorities removed the Pillar of Shame statue – an eight-metre sculpture that depicts bloodied bodies bundled together – in the middle of the night.

“No party has ever obtained any approval from the University to display the statue on campus, and the University has the right to take appropriate actions to handle it at any time,” a statement from the HKU Council read at the time.

Rights groups, activists and some academics expressed condemnation of the closely-guarded overnight operation, while Danish artist Jens Galschiøt, who sculpted the statue, said he was “shocked.”

The Pillar of Shame removal was part of a wider sweep on commemorations of the Beijing crackdown. The next day, Tiananmen tributes at Chinese University of Hong Kong and Lingnan University were also dismantled.

The site of the Pillar of Shame statue was replaced with a seating area earlier this month.