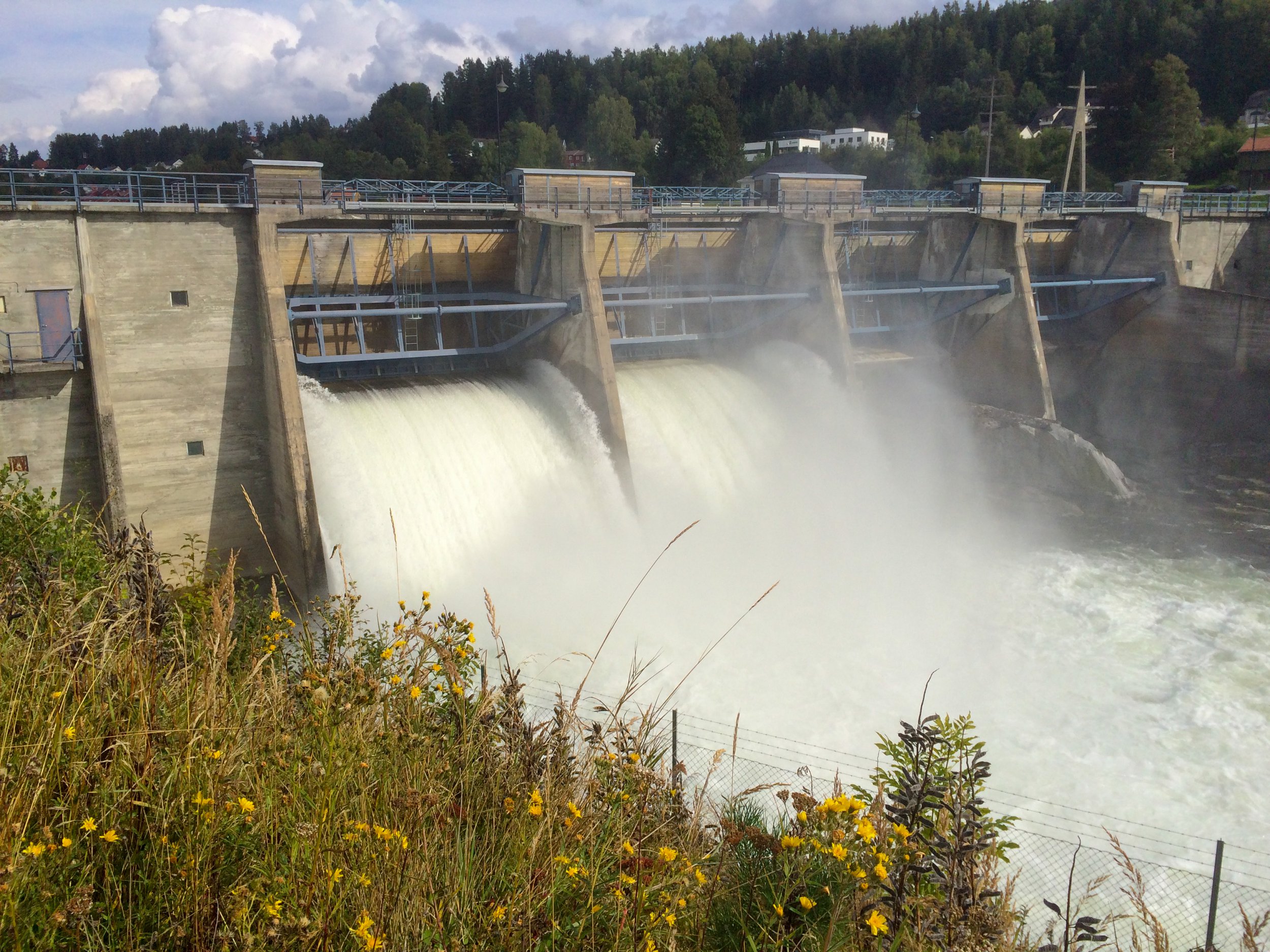 The UK could see blackouts, with people asked to cook their dinner later or turn their lights off to reduce energy consumption, as drought conditions hit hydroelectric power and put further strain on energy supplies, experts believe.

Norway, known as the battery of Europe due to its large hydroenergy capacity, has warned it may have to introduce curbs on exports.

The drought spanning much of western and northern Europe has caused reservoir levels in parts of Norway to plunge to more than 25 per cent below what would be normal for this time of year, according to Morten Frisch, a Norwegian energy consultant based in the UK, who said remaining reserves may need to be “drastically curtailed”.

A 1.4 gigawatt power cable between Norway and the UK which opened last year can supply up to 1.4 million British homes. The UK’s electricity demand soars to around 58 gigawatts during the winter.

Mr Frisch told i: “The consequences of not receiving this power from Norway would be that if a plant goes out in the UK, there could be blackouts.

“The water levels in Norway are now at the point where it’s probably going to take two summers to build it up again.

“Yesterday afternoon and early evening, the UK was importing about 0.7 gigawatts of hydroelectric power from Norway.

“This was the case, although it is my understanding from newspapers at home Norway, in a diplomatic way, has informed the United Kingdom, ‘could you please stop doing this?’ , because we are now nearing water levels in some of our major hydroelectric water reservoirs where we might have to stop producing hydro power.”

He added: “Part of the National Grid’s plan is to import electric power during the coming winter and it might not be available, it’s very simple. The water resources needed to produce electricity for such export might not be there.”

Europe should help Sweden and Norway rebuild their water resources “as much as possible” until the winter so these can be used if there are periods during peak wintertime when there is no wind or sunshine, he believes.

Kathryn Porter, an energy consultant for Watt-Logic believes it is “very likely” Norway will cut its hydroelectric power to the UK, with cable capacity to Britain possibly dropping from zero.

Reservoirs in the south of Norway were seeing their lowest water levels since the mid-90s, which was “really serious”, with low rainfall combining with increased exports to countries including the UK depleting, Ms Porter said.

She told i: “A lot of countries are connected with Norway because they think that Norway can effectively act as a large battery.

“But the problem is there’s no means of charging that battery. It only charges up when it rains or when snow melts.

“And so that is the impact of the drought, if you like, is that the battery isn’t charging up.”

Losing access to imports, for whatever reason, would spell “real trouble” for the UK, she believes, where “mismanagement of the energy transition” has led to more wind power capacity being built without planning on what to do if wind levels are low.

An expected curb on hydroelectric imports by Norway would see heavy industry required to reduce consumption at certain times, with people urged to slash their personal electricity usage, she believes.

“I think there’s a high likelihood we’ll see curtailment of industrial consumption. Then I expect that we could also see public campaigns to get people to reduce consumption or to move their consumption around in time,” she said.

“In Britain, that would be something like, please could you cook your dinner later? Turn your lights off in the room, turn off anything that’s on standby that you don’t need? If that’s also not good enough, then you get into the rolling blackouts territory.”

She added: “Yesterday, we were importing at maximum capacity from Norway. We’re kind of treating imports as a core part of our generation mix. And that is going to cause us trouble going down the line because if Norway restricts the exports, which I think is actually quite likely now, then we won’t have that potential to import in the winter when we really need it.”

Ms Porter added: “The fundamental reason this is happening, and it’s not just in Britain that it’s happening, is that we’ve we’ve built a lot of wind power, and we’ve allowed it to replace thermal and nuclear generation and we haven’t planned sufficiently for what happens if it’s not windy.”

While she doesn’t think the UK will see managed blackouts, Britain is “vulnerable” to outages in “very tight situations” with the risk of localised blackouts increasing.

Figures from Rystad Energy showed that across Europe, hydro-energy has plummetted 20 per cent in 2021/2022.

Eddie Rich, Chief Executive Officer of the International Hydropower Association said this year’s drought was a “wake-up call for us to invest more in infrastructure to enable it [hydroenergy] to backup of the energy mix.

In France, where around half of the nation’s 56 nuclear power stations have been brought offline due to an issue with corrosion, the heatwave has put additional pressure on the power grid.

The French are now having to import electricity from the UK while it tries to cool its remaining reactors, which is more complicated when rivers are depleted and warmer.

The heatwave was causing problems for Germany, too, where the River Rhine is used to deliver coal, oil and gas on barges, with lower water levels restricting the amount of fuel that can be transported.

There were additional concerns, too, caused by the pressure on Norway’s hydroelectric capacity.

“If you get to a situation where Norwegians have used up all their water, they’re going to have to import, and this is actually a worry because they’ve electrified a significant portion of that offshore gas production,” Ms Porter said.

“Everyone in Europe is thinking we need all the Norwegian gas to replace Russian gas. But it’s electrified a lot of its offshore infrastructure. So if they run out of electricity, they might not be able to deliver gas either.”

Ms Porter said the current problems over energy supply were a mixture of “poor policy decisions” in various countries coming to a head at the same time, such as badly-managed energy transitions, with electricity going to get “very expensive” this winter, she believes.

These perceived failures in policy could have had significant geopolitical repercussions by encouraging Vladimir Putin, Mr Frisch believes.

“I know for a fact that the Russians knew very well that EU countries, including the UK, had introduced energy transition policies before reliable and affordable green alternatives were available on a commercial scale,” he said,

“They knew in 2019 it was only a question of time before there was going to be a European energy crash. The LNG market during the 2020/21 winter signalled an energy crisis was imminent.

“I can guarantee you that this was part of Putin’s plan for the invasion of Ukraine. He knew that even if Europe wanted to cut off the Russian gas supply, it wasn’t going to happen. He could play the “gas card” himself without economic consequences for Russia and while damaging the European economy.”

The winter of 2020/21 saw a bitterly cold winter in parts of Asia, which saw gas nearly all LNG destined for Europe redirected to Asia, he said.

“The effect this had on the gas market in Europe was to empty all underground gas storage facilities, including in Russia itself. This played into the hands of the Russians,” he said.

“The Russians who controlled what was Gazprom Germania, now in the German government’s hand, they controlled a very large part of gas underground storage facilities in Europe, particularly in Germany, the Netherlands, and Austria. Gazprom failed to fill these storage reservoirs after the 2020/21 winter.

“Last summer, the Russians knew all these underground gas storages were empty and they didn’t fill them up

“From what I understand from well-informed people in Russia, I am prepared to bet a large amount of money Russia and Gazprom’s realisation in 2019 that a European energy crisis was coming was part of the plan for the invasion of Ukraine. Putin knew that Europe’s hands would be tied… because of the energy situation.”

A BEIS spokesperson said: “We have one of the most reliable and diverse energy systems in the world, and unlike Europe, we are not dependent on Russian energy imports meaning households, businesses and industry can be confident they will get the electricity and gas they need.

“Britain is at a strategic advantage compared to other European countries through access to our own North Sea gas reserves, steady imports from reliable partners as well as pipeline connections to Norwegian gas fields, the second largest LNG port infrastructure in Europe, and a gas supply underpinned by robust legal contracts.”