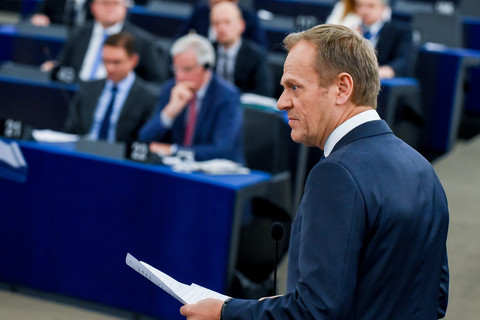 Polish opposition leader Donald Tusk, the former prime minister, called on Tuesday (28 December) for a parliament investigation into reports of surveillance against three people linked with the opposition.

“This is an unprecedented thing in our history. This is the biggest and deepest crisis of democracy after 1989,” Tusk, who also served as the president of the European Council between 2014 and 2019, said.

Tusk added that his party would seek the establishment of a commission of inquiry in the Sejm, the lower house of parliament, to look into allegations of surveillance with the powerful spy software, Pegasus.

Earlier this month, the Associated Press (AP) reported that researchers at the University of Toronto had found that the phones of three Polish people associated with the opposition were hacked using Pegasus.

Opposition senator Krzysztof Brejza, Ewa Wrzosek, a prosecutor critical of the government’s judicial reforms, and Roman Giertych, a lawyer who has represented opposition figures, say that Poland’s ruling nationalists Law and Justice (PiS) party was responsible for the hacking.

PiS has a majority in the parliament and it remains to be seen if they would back such an inquiry, however.

Morawiecki added that he had no knowledge of any surveillance but suggested that if there had been spying, it might have been done by intelligence services hostile towards Poland.

The spyware, made by the Israeli NSO Group, turns phones into spying devices, allowing the spyware user to read the target’s messages, look through their photos, track their location, and even turn on their camera without them knowing.

In the meantime, Brejza, the Polish opposition senator who believes his phone was hacked has accused prosecutors of failing to act on the case.

But Stanisław Żaryn, a spokesman for the Polish security services, said the allegations that Polish services “use these methods in operational work for political ends are false”, AFP reported

He did not confirm or deny whether Poland had used Pegasus but said “operational work” in Poland can only be carried out on request from the prosecutor general and after a court order.

“The prosecutor’s office is doing nothing, it is paralysed,” senator Brejza told Reuters by telephone, adding that he had notified prosecutors about possible phone hacking in September.

He claimed that the complaint had been passed between prosecutors’ offices around the country without any effect.

The prosecutors’ offices did not immediately respond to Reuters’ requests for comments.

Government critics say that the Polish judiciary, including the prosecutors’ office has been politicised.

Justice minister Zbigniew Ziobro, who is in charge of the judicial overhaul that the EU says undermines the independence of courts, also serves as prosecutor general.

The NSO Group says it makes technology for use by governments and law enforcement agencies to combat crime and terrorism.

Digital rights researchers say Pegasus has been used to spy on civil society and journalists in several countries, including Hungary.

Just like Poland, Hungary is entangled in a rule-of-law row with the EU, which has launched a probe against the two countries’ governments over judicial independence and alleged democratic backsliding.