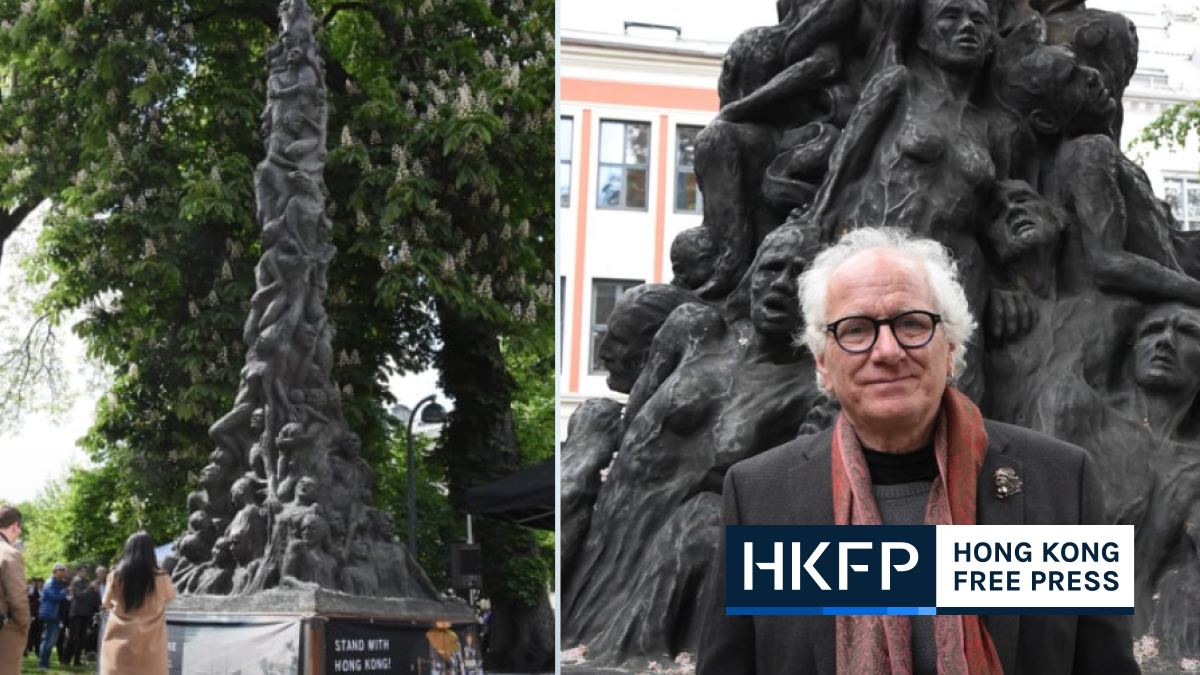 Replicas of a Tiananmen statue removed from a local university campus last year have found a home abroad in the run-up to the 33rd anniversary of the Beijing crackdown, as commemorations in Hong Kong itself are expected to be muted amid the national security law.

This year, commemorative masses have been axed and police have warned Hongkongers not to gather, as Victoria Park – site of a traditional candlelit vigil – is closed. Since the onset of the security law in 2020, Tiananmen books have been pulled from shelves, monuments removed, activists arrested, and museum exhibits confiscated.

A Pillar of Shame sculpture was unveiled at Norway’s University of Oslo last week. The statue is a full-scale replica of the eight-metre-high piece at the University of Hong Kong (HKU), which was torn down last December in a move that was widely criticised by activists and rights groups.

The creator of the original sculpture, Jens Galschiot, personally unveiled the new work in the Norwegian city. “The message is to show the world that we’re still talking about Hong Kong, we won’t forget Hong Kong and we won’t forget what China is doing in Hong Kong,” Galschiot said.

Separately, a smaller version of the statue will debut at a vigil in Taipei on Saturday. Organised by Taipei-based NGO New School for Democracy, the memorial will be placed at the National Chiang Kai-shek Memorial Hall, according to the Taipei Times.

The Tiananmen crackdown on June 4, 1989, ended months of student-led demonstrations in Beijing. It is estimated that hundreds, perhaps thousands, of people died when the People’s Liberation Army was deployed to disperse protesters.

The original Pillar of Shame statue was moved to HKU in 1997. To mark the anniversary every year, students took part in a ritual to clean the sculpture.

But it was removed in a closely guarded overnight operation in December while students were away on Christmas break. The worksite was hidden behind barricades and security guards kept reporters away.

“No party has ever obtained any approval from the University to display the statue on campus, and the University has the right to take appropriate actions to handle it at any time,” a statement from the university read.

The next day, the Chinese University of Hong Kong and Lingnan University also tore down artworks commemorating the Tiananmen crackdown.

Police said on Thursday they had spotted online posts appearing to “incite” others to take part in an unauthorised assembly in Causeway Bay on Saturday, the anniversary. In decades past, candlelight vigils were held at Victoria Park in the district to commemorate the dead.

But police did not explain what the posts in question entailed, saying they “would not help promote” such content. On Friday, police warned that anyone gathering risked five years in prison.

Police banned the vigils in 2020 and last year on Covid-19 grounds when the Hong Kong Alliance in Support of Patriotic Democratic Movements of China, the pro-democracy group that organised the yearly Victoria Park vigils, applied to hold the gathering.

The group disbanded last September under pressure from authorities.

In 2020, many Hongkongers defied the ban and went ahead with the commemoration. A number of prominent veteran activists, such as Lee Cheuk-yan, Albert Ho and Chow Hang-tung, have been jailed for organising or taking part in an unauthorised assembly.