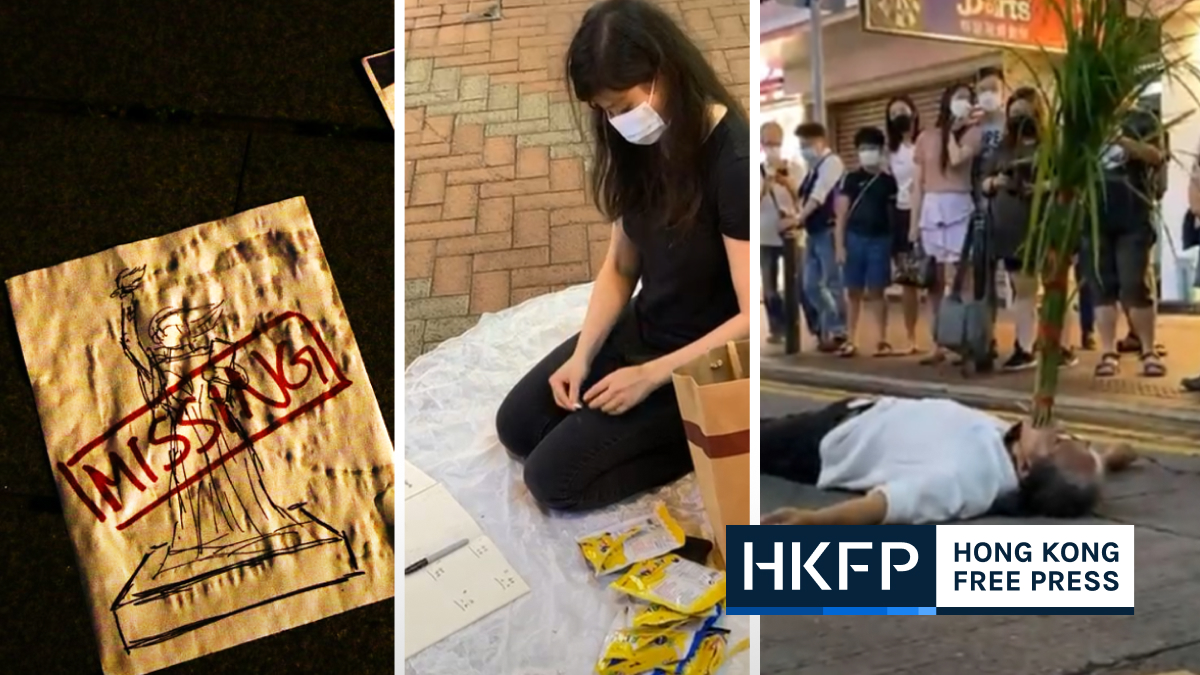 At least two performance artists were seen in Causeway Bay on Friday evening – the eve of the 33rd anniversary of the Tiananmen crackdown.

Police have warned that Hongkongers risk up to five years in prison if they take part in authorised assemblies, with commemorations expected to be muted amid the national security law and Covid-19 restrictions.

One male artist silently lay on the ground with what appeared to be some plants in his mouth after unfurling a white scroll and presenting a candle in a block of ice.

Another woman sat on the pavement appearing offer mathematical puzzles. Both were approached by the police who noted down their personal details.

According to a PSHK livestream, police played a recording to warn people at the scene not to breach the four-person Covid-19 gathering restriction. More than 10 uniformed police officers also patrolled the area – one of them held a video camera to film the crowd.

Speaking to reporters at the scene, the male artist said he has performed on the street on June 3 for 13 years to mark the anniversary.

The man said there were more than 10 artists performing in previous years, though only two to three showed up this year. Asked if he was worried about his safety, the artist said he was scared and did not want the press to film him or disclose his name.

Victoria Park is closed ahead of Saturday’s Tiananmen crackdown anniversary. The park in Causeway Bay has traditionally been the site of commemorative candlelit vigils to remember the 1989 dead.

Anonymous organisers have created small 3D-printed replicas of the statue. Students were asked to conduct a scavenger hunt for the figurines as an act of remembrance.

Also on Friday, Police arrested a 45-year-old man on suspicion of breaching the colonial-era sedition law by spreading hate speech against the government and the police, as well as promoting violence.

The man was said to have incited others to gather at Victoria Park, as well as making online statements that threatened to kill police officers.

Police have warned that anyone participating in an unauthorised assembly risks up to five years in prison, as Victoria Park is closed ahead of Saturday’s Tiananmen crackdown anniversary. The park in Causeway Bay has traditionally been the site of commemorative candlelit vigils to remember the 1989 dead.