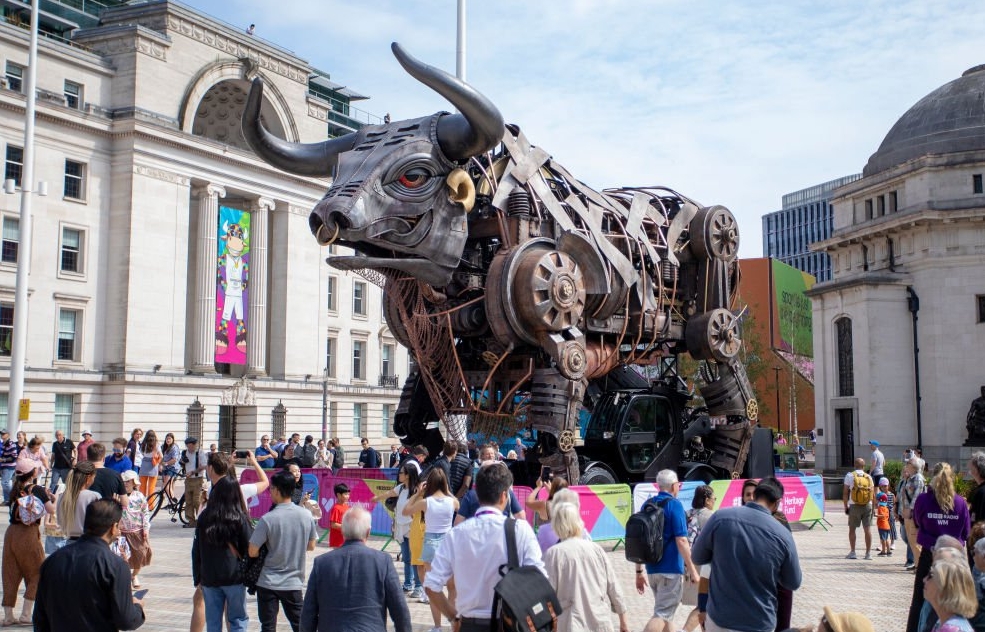 “Birmingham. When I first came to this city, I had never heard its name,” said Pakistani activist Malala Yousafzai at the 2022 Commonwealth Games opening ceremony. Despite being the UK’s second city and the home of heavy metal music, Cadbury chocolate and the Peaky Blinders, this statement was true to many around the world – but not anymore.

Malala, a name now synonymous with bravery, education and female rights, was shot by the Taliban 10 years ago this October. After being treated in Pakistan, she was transferred to the Queen Elizabeth Hospital in Birmingham, the city that would become her home.

This summer, the city also welcomed 72 countries and territories to compete in the 22nd Commonwealth Games – the most successful yet, with six times more (57 million) BBC sport event streams than any previous edition and 1.5 million tickets sold. Now Birmingham is up for its next challenge – competing to host the 2023 Eurovision Song Contest on behalf of this year’s winners, Ukraine.

And where better to entrust a showcase of Ukrainian culture and music than a vibrant city riding the crest of a wave of popularity?

Long gone are the jibes about Benny from Crossroads; instead the best-known Brummie character is Peaky Blinders’ Tommy Shelby. There are no more accent digs either, because Cillian Murphy made the Birmingham drawl sexy. Those who think Birmingham’s music scene isn’t up to scratch can be pointed towards the Commonwealth Games closing ceremony. Where else would you get UB40, Apache Indian and Black Sabbath on the same bill?

To launch its bid for Eurovision 2023, Birmingham City Council has partnered with local Central and Eastern European gallery and performing space Centrala (centrala-space.org.uk). It is the only publicly-funded gallery of its kind in the UK and it is hoped it will give the proposal a unique edge.

“The bid Birmingham prepares will focus on Ukrainian art and culture and representation of Ukrainians here in the UK,” says Alicja Kaczmarek, director of Centrala.

“We have been actively supporting Ukrainian refugees since the start of the war, and our main purpose is to promote Central and Eastern European art and culture.”

“Due to the connections we have with our [Ukrainian] communities, we were invited to organise a workshop at Council House and look at designing the logo for the campaign,” she adds.

“We believe that hosting Eurovision in Birmingham would be amazing for our Ukrainian communities. To have this massive European event here would provide hope and recognition.”

Host cities are required to meet certain criteria: they must have an arena of at least 10,000 capacity; sufficient space to accommodate performers, crew and spectators; a financial commitment to host an event of this scale; a strong cultural offering which showcases Ukrainian culture and music; and a clear alignment with the BBC’s values as a public service broadcaster, including supporting the UK’s creative economy.

Birmingham ticks all the boxes. It is the Resorts World Arena (resortsworldarena.co.uk) and the National Exhibition Centre complex that provides the most compelling case against the host city competitors of Glasgow, Leeds, Liverpool, Manchester, Newcastle and Sheffield.

Not only does the complex boast a 16,000-capacity arena, it is linked directly with an international airport that serves most of Europe, and a busy train station for UK connections, including Birmingham New Street, which is reachable in just nine minutes. The complex and adjoining airport has thousands of hotel rooms within walking distance. And, as proven by the Games, the area can easily be secured too.

It is not just about its arena or transport links though; Birmingham’s cultural offering is brilliantly unique. In the same day, visitors can view Ukrainian art at Centrala; take a barge tour down its many miles of once-industrial canal; explore where Tolkien took inspiration for Lord of the Rings; sample an authentic Balti in the city that birthed it; and treat in the Jewellery Quarter, which is home to 40 per cent of the UK’s jewellery output.

Other candidates like Manchester, Glasgow or Liverpool will be well-equipped to host Eurovision too.

Yet, us Brummies would argue, why not piggyback on Birmingham’s recent successes?

It has been a long time coming, but it is surely time to help the city solidify its place on this map. Brummies are friendly, warm and now world-famous for their unique welcome – the kind of city spirit that Eurovision seeks for its next host city.

In fact, you don’t even need to be from the city to be a Brummie. Malala had never heard of Birmingham but in her opening ceremony speech she proudly exclaimed she “would soon come to understand it.” Haven’t we all.