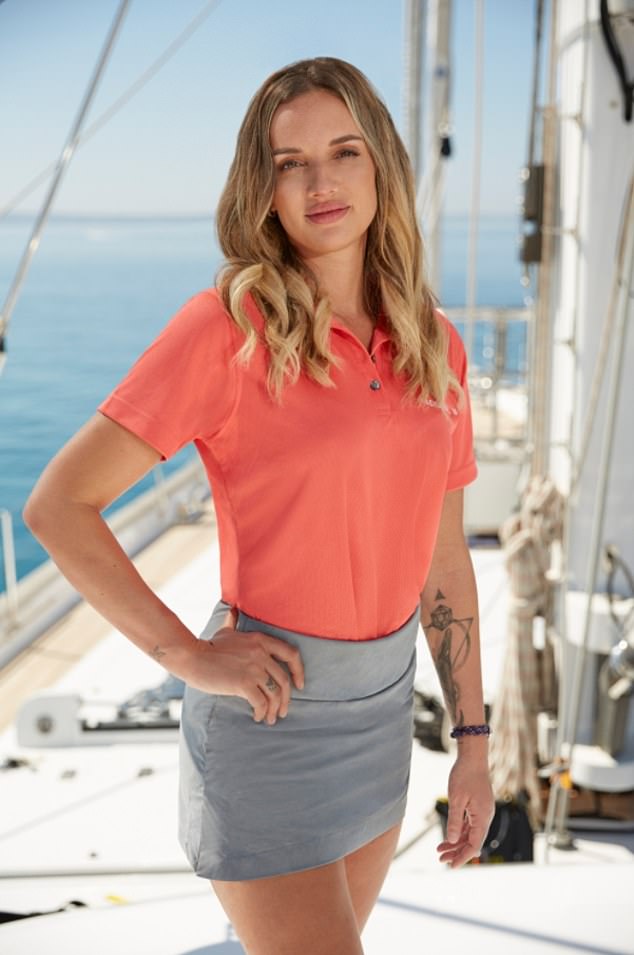 The Under Deck franchise is one of the most popular shows on Bravo and hayu.

And now Alli Dore and Daisy Kelliher, who star in the Under Deck Sailing Yacht spin-off, have revealed the worst part about filming the hit series.

Speaking on their new podcast Below the Surface with co-star Kate Chastain, the couple said they hated filming their confessional interviews with producers.

Not a fan! Under Deck Sailing Yacht stars Alli Dore (pictured) and Daisy Kelliher have revealed the worst part about filming the hit series

‘You didn’t like those?’ said a stunned Kate. “I loved the interviews. These are my favourites!’

Alli replied: ‘No! They were tortured. It was the lights, the interrogation environment… I hated them.

Kate, who appeared on six seasons of the original Under Deck, went on to explain why she loves filming confessional interviews so much.

“I hated them! Speaking on the Beneath the Surface podcast with co-star Kate Chastain (centre), the couple said they hated filming their confessional talks with producers

“The reason I like green screen interviews is because you get your hair and makeup done and then you can drink champagne and talk about people,” she said.

“I’ve been training for this all my life!” she added, laughing.

“I don’t think the same way,” Daisy replied. ‘We get hungover, because we do them all the time when we’re hungover, [and] I don’t think I’m funny so I’m just talking shit.

Split: ‘They were tortured. It was the lights, the interrogation environment… I hated them,’ Alli said, after Kate admitted the interviews were her favorite part of the show.

Alli has since left the show after becoming a mother, but chief hostess Daisy is back for season three, which premiered this week.

The new season teased drama and explosive storylines, including a romance between Daisy and seaman Gary King.

Agree: “We get hungover, because we do them all the time when we’re hungover, [and] I don’t think I’m funny so I just say shit,’ Daisy said

The first season of Under Deck Down Under is set to premiere in the US on Peacock on March 17 and in Australia on Hayu on March 18.

The new episode, which was filmed on location in the Whitsundays, features the Under Deck franchise’s youngest captain, Captain Jason Chambers.

It will also see the return of Under Deck Mediterranean star Aesha Scott, who is the new Chief Hostess.

To agree! Under Deck Sailing Yacht recently returned for its third season on hayu