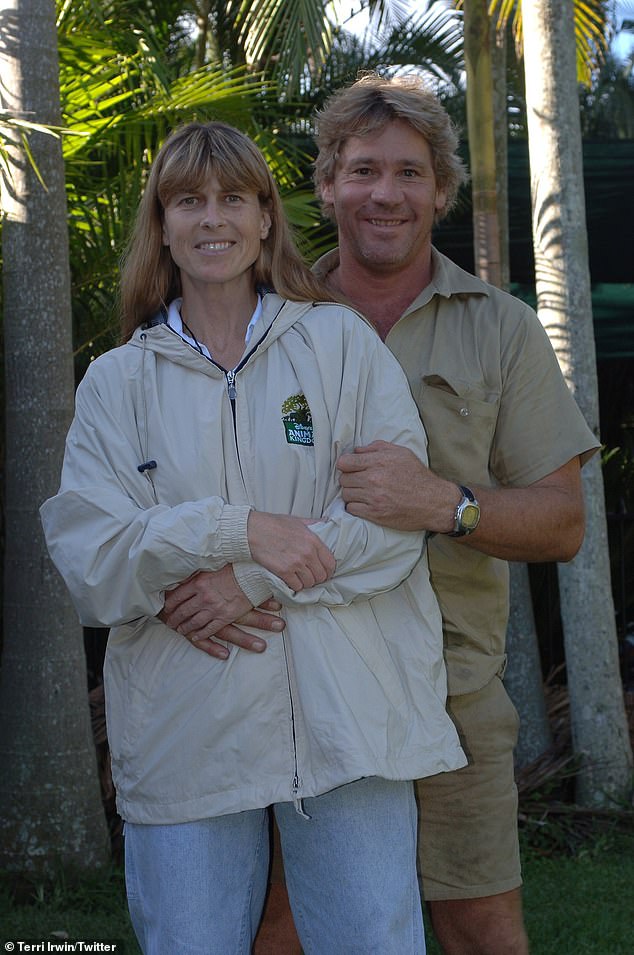 Teri Irwin celebrated her 30th marriage by sharing a touching tribute to her late husband Steve.

The mother-of-two shared a touching photo on Twitter of herself and Steve Saturday standing together and smiling as he gently touched her arm.

Steve in his signature khaki uniform while Terri wore a tan rain jacket.

“I married this amazing guy 30 years ago today,” she wrote

‘What an adventure! The love and the legacy endure.

Terri has been open about her romance with the iconic Steve, who tragically passed away in 2006.

Sweet: “I married this amazing guy 30 years ago today,” she wrote. ‘What an adventure! Love and Legacy Live

Speaking to Anh Do as part of her Brush With Fame program, she recalled the time she met Steve and wondered if he was single.

Love affair: Terri has been open about her romance with the iconic Steve, who tragically died in 2006. On special occasions, she often speaks about their deep love for each other

“I was 27 and thought my life was going to be my job, I met Steve and instantly fell in love,” she added.

Terri said she was impressed with how cool and calm Steve was as he fed a crocodile for a show.

“I thought that man was the most amazing guy I’ve ever seen. He’s probably married. He needs to be taken,” she said.

‘I wasn’t even dating, I wasn’t even looking’: Speaking to Anh Do on her Brush With Fame program, she recalled the moment she met Steve and wondered if he was single.

That’s when she worked up the courage to talk to him – but much to her dismay, Steve immediately said he wanted to introduce her to his “girlfriend”.

“I just felt completely crushed and then he yelled, ‘Hey, Suey! And here is this little dog, Suey. I went, ‘Boom! No girlfriend!”

Steve and Terri married in 1992 in his home state of Oregon.

Steve died in September 2006 aged 44, after being pierced through the chest by a stingray beard while filming a wildlife documentary in Queensland.

Shock: Steve died in September 2006 at the age of 44, after being stabbed in the chest by a stingray while filming a wildlife documentary in Queensland. Pictured with daughter Bindi