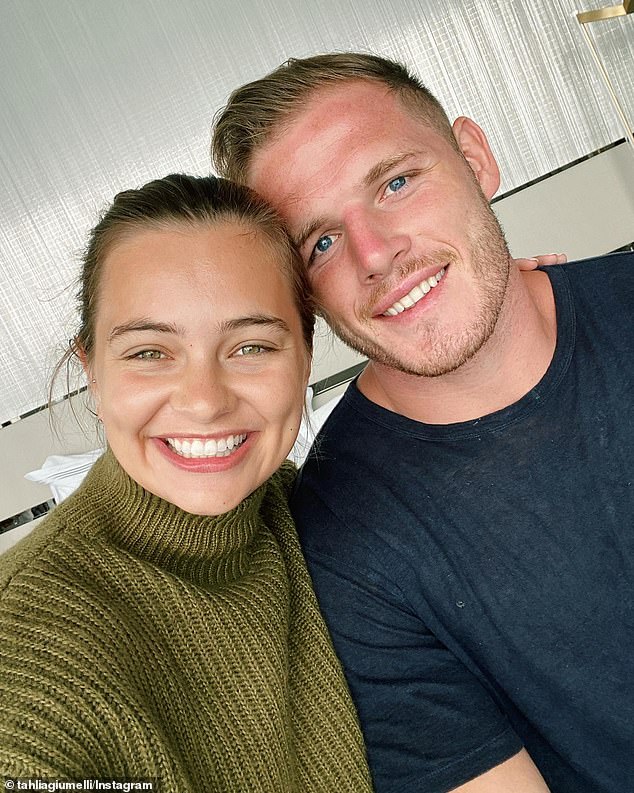 NRL star Tom Burgess and his brothers are arguably some of Australia’s most famous athletes.

But Tom’s new wife, Tahlia Giumelli, was unaware of his successful sporting career when they first met more than four years ago.

Speaking to Stellar magazine, the 29-year-old model said she was unaware of his fame and doesn’t even watch his matches anymore now that they are married.

Who? NRL star Tom Burgess’ new wife Tahlia Giumelli was unaware of his glittering sporting career when they first met more than four years ago

“When I first met Tom I was living overseas so I didn’t know about it,” she admitted.

“I met Tom for who he was and not what he did. And if I’m being honest, I still don’t know much about what he does,” she continued.

“When he’s on the pitch, he knows I definitely have Netflix and Thai takeout.”

‘I met Tom for who he was, not what he did’: Tahlia lived abroad before meeting Tom, so she didn’t know who he was

Tahlia and Tom tied the knot in a star-studded ceremony at a waterfront park in Sydney’s Watsons Bay in January.

Sporadic rain couldn’t dampen their spirits, the blushing bride and her smitten groom beaming throughout the ceremony.

Tahlia looked stunning in a figure-hugging white wedding dress from Prea James Bridal as she walked down the aisle towards Tom.

Married: Tahlia and Tom tied the knot in a star-studded ceremony at a waterfront park in Sydney’s Watsons Bay in January

The couple announced their engagement on New Year’s Eve in 2019, after three years of dating.

They were forced to postpone their nuptials several times and were forced to scrap their last set of wedding plans in December after Tom contracted Covid-19 while on vacation in Byron Bay.

They share two children together; daughters Sophie, two, and Elodie, one.