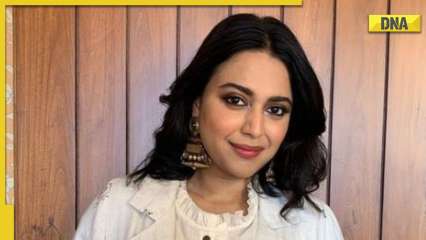 Bollywood actress Swara Bhasker, who is waiting for her with the release of her upcoming film Jahaan Charr Yaar, has given a fitting response to trolls who had targeted her on Twitter. It all started when the actress tweeted about her film.

A social media user responded to her tweet, writing, “I’m anxiously awaiting the movie to hit theaters.” Swara said, “Thank you.” After this, social media users started targeting her and trolling the actress. One wrote: “You’re welcome, there’s actually construction going on in my apartment so I can’t find a quiet place to sleep, what could be quieter than theater during your movie!”

Swara replied, “Haha! Glad I gave you the chance to land your much practiced and rehearsed joke. Now go show off your boyz I replied.’ The person commented, “Haha you’re not a celebrity to brag about, nor do I like dancing in front of other people.”

haha! Glad I gave you the chance to land your much practiced and rehearsed joke.
Now go show off your boyz I replied! https://t.co/HOCqetKdZq — Swara Bhasker (@ReallySwara) August 4, 2022

For the uninitiated, Swara’s film Jahaan Chaar Yaar, which also stars Meher Vij, Pooja Chopra and Shikha Talsania, will be released on September 16. The movie is directed by Kamal Pandey.

Earlier, Swara Bhaskar had filed a complaint in Vasant Kunj in Delhi over alleged offensive comments by a Twitter user and YouTube influencer on an old movie scene of hers. She filed a complaint, saying that some posts and hashtags are circulating on the social media platform with the intention of outraging her modesty.

Delhi Police has filed the criminal case based on her complaint under Sections 354D, 509 IPC and 67 IT Act. Raanjhanaa’s actor has often been heavily trolled and criticized on social media for talking about various socio-political issues and controversies. Swara Bhaskar has also supported Shah Rukh Khan after his son Aryan Khan was arrested in a drug seizure case.

The Nil Batey Sannata actor had shared a series of posts expressing her views on Aryan Khan’s arrest and also shared a screenshot of it on her Instagram story questioning the arrest of Shah Rukh Khan’s son.