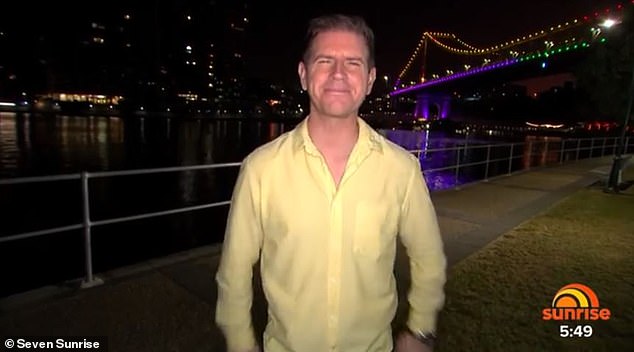 Sunrise meteorologist Sam Mac has launched a scathing comeback after being trolled by a viewer in a letter to the editor of the Sunday Mail.

The Breakfast TV comedian has responded to a letter in the Adelaide newspaper suggesting he was paid by Channel Seven to do “very little”.

The letter, signed by Neill of Woodcroft, accused Sam of accepting free meals, accommodation and plane tickets, then pointedly asked how he filled his days after doing the morning weather report.

Sam, 40, replied on Instagram: “First of all, I must congratulate you on your accurate summary of my role as a meteorologist, which is to tell people the weather.

He continued, “Now, in response to your question, when I’m not basking in the glory of accommodation, meals and free plane tickets, I like to spend the rest of the day practicing my skills. favorite times.”

Sam then listed an unlikely set of hobbies, including rock jumping, Latin dancing, collecting navel fluff, beatboxing and learning the national anthems on the flute.

The letter (pictured) accused Sam of accepting free meals, accommodation and plane tickets, then pointedly asked how he was filling his days after doing the morning weather report

“If there’s time left, I like to write snide letters to my local papers. And you, Neil? What do you do the rest of the day? Sincerely, Sam.

Co-host Natalie Barr joined in the fun, telling Sam, “Neill, it’s all of us!”

Sam then suggested that maybe Kochie had written the letter, asking her, “Is your pen name Neill?”

The letter, published on Sunday, was titled “Not a cloud in the sky.”

“I must have smiled when Sam Mac of Sunrise recently said he had a fantastic week,” Neill’s letter began.

“Well, of course he would say that after spending all week in the Hunter Valley. But what does he actually do? It seems like very little to me, except to give weather temperatures and tell viewers it’s going to rain or it’s going to be sunny.

“It’s not a bad job: getting paid while getting accommodation, meals and, I guess, free plane tickets. I’d like to know what he does the rest of the day.

Mac is seen here watching the Logies on Sunday night