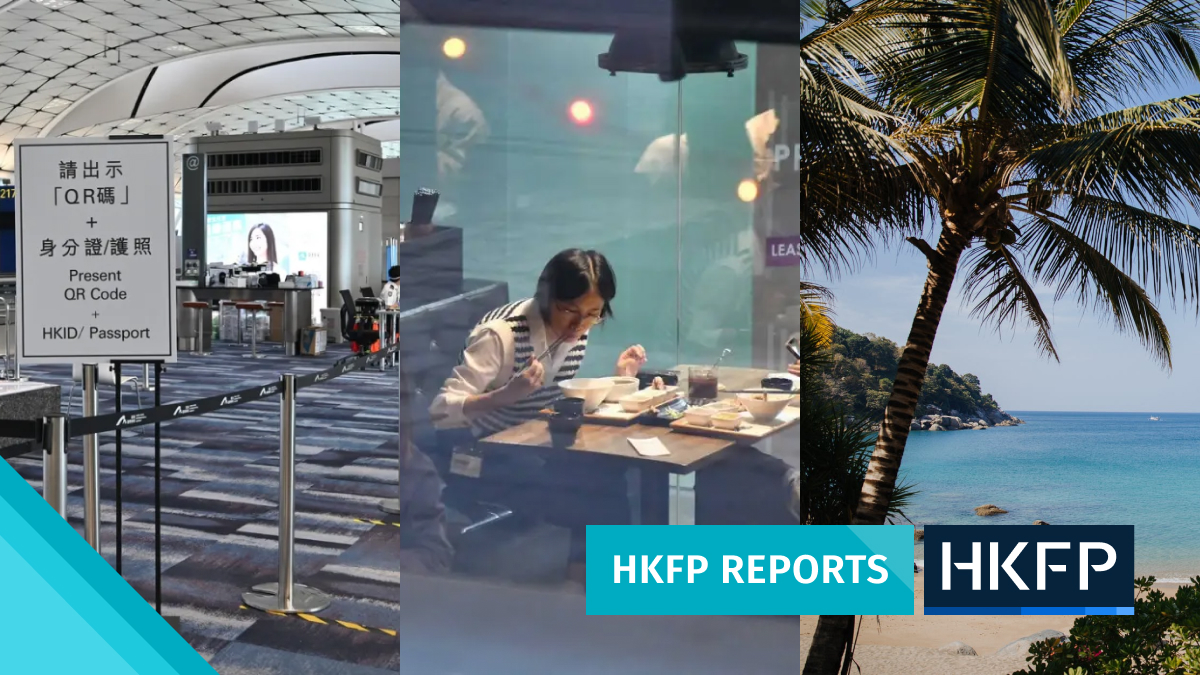 Grace* left Hong Kong in mid-December for six weeks “to make the three-week quarantine on return worthwhile.” Or so she thought.

Originally from New Zealand, the 32-year-old who works in holistic health flew to the UK to visit family she hadn’t seen for two years, including a new addition she had never met. About halfway into her trip, Chief Executive Carrie Lam announced that Hong Kong was “on the verge” of a fifth wave of Covid-19 as it banned flights from eight countries – Australia, Canada, France, India, the Philippines, Pakistan, the UK and the US. Nepal was added to the list in February.

Then came the months of unpredictability: “There has been a lot of uncertainty as the flight ban was for two weeks initially and kept extending,” Grace told HKFP, adding that with flights and a booking for a quarantine hotel there were “a lot of travel plans to keep changing.”

Lam announced on March 21 that the hotel quarantine period required for arrivals would be shortened to seven days and flight bans would be lifted from April 1, saying that the pandemic situation in those countries was now “no worse than Hong Kong.” A government release said the suspensions was untimely and “causing distress to Hong Kong people stranded overseas.”

As of Sunday, the city has reported more than 1.1 million Covid-19 cases and 7,252 related deaths.

The response – both online and offline – was largely positive, a rarity when the city’s Covid-19 measures are concerned. It was also short-lived.

Like Grace, many of the Hong Kong residents HKFP spoke to for this story – whether overseas and trying to return home, or planning to travel out of the city in the foreseeable future – told of how their relief, hope and optimism at hearing the news were quickly replaced with more familiar feelings: uncertainty and anger.

Last Wednesday, Lam described the lifting of the flight ban and shortening of the quarantine period as “a rationalisation of our quarantine arrangements.” She had received “a lot of feedback” since the announcement, she said, with people pointing out two problems. Namely, a lack of flights and a lack of hotel rooms.

“I have been in contact with Cathay and my hotel, but it’s hard to get in touch with them with everyone now rebooking,” Grace said.

Complicating matters further is Hong Kong’s flight suspension mechanism, an airline-specific route ban that is triggered if three or more passengers on the same flight test positive for the virus upon arrival in the city. On Sunday, Lam announced that the suspension period would be halved to seven days from April 1 but not axed.

At the time of writing, six routes operated by four airlines – including two flown by Cathay – have been prohibited from bringing passengers in. A number of those routes are popular with Hongkongers who have chosen to “washout” – or transfer through a third, non-restricted country for at least 15 days to nullify their time spent in one of the nine banned destinations. Bangkok, Singapore, Dubai and Istanbul are among the banned routes.

Grace considered a washout, but ultimately decided against it. “With the ban extending and the restrictions and infection numbers going up in Hong Kong, it didn’t make sense to,” she said, acknowledging she was “lucky” to be able to work remotely. “I would have been working from home in Hong Kong, anyway.”

Sarah,* on the other hand, decided to take a roundabout route home from the US, where she went to meet her family for Christmas. She is making her way back to Hong Kong via the UK, where she went to see friends and extended family, before moving onto Thailand, where she is currently.

When the flight ban was implemented just days before she was supposed to return from Florida, the 29-year-old British finance worker said she was “very annoyed and pissed off and angry at Hong Kong… but also there was a little bit inside of me that was kind of expecting it to happen.” It was not her first flight ban, having been in the UK in December 2020, when Hong Kong first stopped all passenger flights from the country until May. Nor is this her first washout. Last year, she made her way back to the city through Dubai.

Speaking to HKFP from Phuket, Sarah said her feelings about the flight ban – and about the city – were different this time, though. “It made me really, really angry and I was like, ‘I hate this, I hate how we’re just being scrutinised even though we’ve been vaccinated.’ It made me just want to leave Hong Kong.”

Now that she is in Thailand, uncertainty about leaving the city for good has crept in, but she is in no rush to come back. “I don’t have a flight or a quarantine hotel booked,” she said, although the hotel she booked her quarantine with in January has held her reservation. With regards to the flight bans being lifted and the quarantine shortened, Sarah expressed indifference, describing the moves as “too little, too late.”

Neon artist Karen Chan has spent 56 days in quarantine since the pandemic began. She travels for work, usually to Europe, which is where her partner is currently based.

“I’m glad that the flight ban has been lifted and quarantine has been reduced to seven days,” Chan told HKFP. “I wish we did it sooner.” With plans to fly out in May and return in August, Chan said the latest measures made little difference to her arrangements. However, she hoped they might have some impact on her state of mind while overseas.

She said she constantly has to read up on policy shifts when she is out of the city: “It was a relief that there will probably be more flights flying out, and that I will have to do less days of quarantine and stay focused on my neon project.”

Her partner, meanwhile, remains in France and has given up trying to plan a journey back to Hong Kong. “One thing from our previous experience was that we can never really plan our trip back. Even if we did, there’s always new measures coming up,” Chan said. “So we try to book last minute flights and hotels now, to ease our stress.”

With her fifth quarantine lined up for May, Italian Annalisa Schiavon is also familiar with the city’s travel restrictions. Schiavon has lived in Hong Kong for 22 years and works in the fashion industry, a job that requires her to travel and, these days, isolate. She said she was happy that the flight bans would be lifted as she had been affected by them “many times” before, “but I honestly don’t believe it will last for long.”

Schiavon is not alone in displaying a lack of confidence in the latest travel regulations remaining in place. No sooner had Lam announced the changes, than Hongkongers had pointed out their start date: April Fool’s Day.

During last Monday’s press briefing, Lam also laid out a timetable for relaxing the city’s social distancing measures, providing “that the epidemic situation shows no signs of rebound and continues the downward trend.” According to epidemiological modelling from the University of Hong Kong (HKU), a sixth wave of infections is all but inevitable as current restrictions are relaxed.

Assuming that all social distancing measures are relaxed by June 1, HKU’s model forecasts a “sixth wave which is expected to last for 2 months with an additional 2.21 million infections and 1,540 deaths by August 15.” However, when meeting the press last Tuesday, the dean of HKU’s Li Ka Shing Faculty of Medicine Gabriel Leung said that “a controlled transition towards endemicity sooner rather than later,” such as this, was the “safest” way forward for Hong Kong.

“Full reopening of international travel will have little marginal impact on the disease transmission during the sixth [wave] if all arrivals are required to be fully vaccinated and test-negative upon boarding,” the HKU presentation stated.

One of the slides displayed by Leung looked at Hongkongers’ mental health under what HKU called “Interminable cycles of ‘suppress and lift,’” relating to social distancing measures. It showed record levels of probable anxiety and depression among the population during the pandemic.

The results from a recent public opinion survey conducted by researchers from Hong Kong Baptist University released last Thursday found that “participants showed relatively lower levels of confidence in Hong Kong Government’s efforts in curbing this wave of the pandemic, with the average score of 2.68 out of 10,” according to a press release.

“Their level of anxiety was high, which was mainly caused by the information uncertainty in this wave. More than 60 per cent of respondents felt that the information they received about the anti-pandemic arrangements was confusing.”

Reacting to Lam’s announcements on Twitter last Monday, HKFP contributor Ilaria Maria Sala wrote: “The amount of excitement I’m feeling at the thought of being able to go somewhere and *only* do 1 week quarantine at an expensive hotel + a gazillion Covid tests must be proof of the type of trauma gaslighting + repressive measures cause: I’m so happy that it’s a lil less crazy!”

For Sarah, frustration has been the overwhelming emotion. “We have been vaccinated and quarantined and worn masks everywhere and couldn’t travel or see family, obeyed all the rules… and then the virus still spreads and has been fatal to so many and all of it was for nothing.” She is still in two minds as to whether to stay in Hong Kong or try somewhere like Singapore, instead.

“I don’t see much hope left in Hong Kong travel-wise and work-wise,” she said. “I don’t really have anything tying me to Hong Kong.”

Grace, who is planning to return, also displayed conflicting emotions about coming back. If she did not have to come back to apply for permanent residency, she said she would stay away for the summer. The flight bans alone, “not even the general sentiment or restrictions in Hong Kong,” had made her “quite sad,” she said. “It will be such a relief to finally come home. I don’t mean to shit on it. But it sounds really hard to be there right now.”

* Some names have been changed at interviewees’ requests.