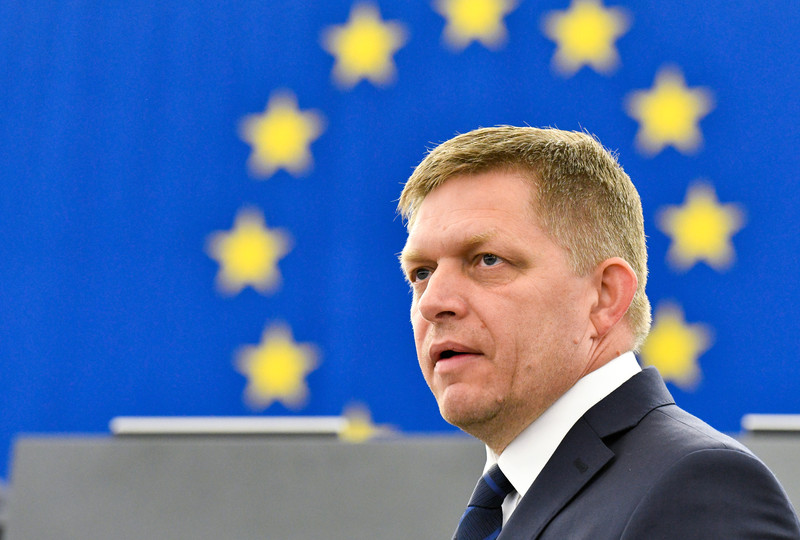 In a major blow to the anti-corruption rhetoric of the Slovak ruling coalition, the parliament in Bratislava has rejected a request for the arrest of ex-prime minister Robert Fico.

Fico faces charges of abusing his powers, under a scheme the prosecutor described as a “criminal group” operating during the previous government.

“Justice has lost a battle,” Igor Matovič, leader of the main government OLaNO party commented after the vote on late Wednesday (4 May). “It is one of many we will still have to fight in this war,” he said.

“It was clearly a political process,” Fico told journalists and thanked deputies for stopping the move. While all opposition MPs voted against, all members of the coalition Sme Rodina party of the parliament chairman Boris Kollár and two OLaNO MPs abstained.

As a result, two votes were missing for the assembly to give a green light for Fico’s arrest. The decision means Fico’s criminal prosecution continues without a judicial verdict on his custody.

In the same criminal case, the court had ruled that Robert Kalinak, ex-minister of the interior in the governments headed by Fico between 2006 and 2018 be kept in custody — as he is no longer a deputy, the parliament’s permission was not required.

The charges against the two leading figures of the social democrat party (SMER-SD) come after a series of corruption and abuse-of-power cases involving top-level state officials, such as the former attorney general, and ex-chiefs of police and tax administration.

According to prosecutors, Fico and Kalinak used confidential tax information provided by members of that illegal scheme to publicly attack their political opponents, namely former president Andrej Kiska and the then opposition politician and current finance minister Matovič.

For his part, Fico has argued that it was all just politics.

“If they at least fabricated corruption charges, but to accuse me of setting up a criminal group by appointing loyal people to office would suggest that any government leader could be regarded the head of organised crime,” he says.

But NGOs following the investigation of cases — like bribes collected in return for closing criminal prosecutions, or corruption schemes designed for distributing public money, including EU agriculture subsidies — view Fico’s claims as part of his legal defence.

“State capture would undoubtedly be impossible without the assistance of political leaders,” Zuzana Petkova, of the Stop Corruption Foundation in Slovakia told EUobserver.

“And there are testimonies of state capture by officials from police, financial and public administration who have confessed corruption and, in some cases, have been sentenced. So, I disagree that this is simply a political process,” she added.

Before the Slovak parliament’s decision, Fico tried to convince European politicians and institutions of his case.

Reacting to his letter, Věra Jourová, EU justice commissioner, told Czech TV that the EU executive cannot interfere with criminal investigations. But she criticised as “insulting beneath the dignity” Fico’s comments on current president Zuzana Čaputová, whom he had referred to as “an American missus.”

Fico fired back that Jourová had failed to act on “the total destruction of justice in Slovakia, although it is part of her job description for which she gets a €20,000-a-month salary.”

In the opposite initiative, eight Slovak MEPs called on the S&D group to kick out Fico’s Smer-SD party, saying the party no longer represents their values.

They highlighted vulgar insults against Čaputová by its supporters at a 1 May gathering, incited by party vice-chairman Ľuboš Blaha.

Monika Beňová, MEP and quaestor of the European Parliament, later apologised on social media for the incident, and said she had not heard the insults while standing on the stage.

“Unfortunately, the rhetoric of Robert Fico and other leading members of SMER-SD increasingly resembles that of the extremists. Through these actions, they have taken their party to the fringes of the European political spectrum,” Miriam Lexmann, MEP in the centre-right European People’s Party (EPP) told EUobserver.

For her part, Beňová rebuked attempts by other Slovak MEPs to attack the Smer-SD party in Brussels.

“We have pushed forward on the long-term basis all the topics which are associated with social democracy,” she was quoted as saying by the TASR agency.

However, many in Slovakia would disagree, hinting at the party leaders’s previous stance on human rights, migration, or other solidarity-related issues.

Back in 2006, the S&D suspended the membership of Smer-SD for their coalition with the far-right Slovak National Party.

But based on the party’s current anti-American and anti-Nato rhetoric, analysts predict Smer-SD could be tempted to join forces with the extremists again.

Dominika Hajdu, the head of Bratislava-based Globsec Centre for Democracy & Resilience pointed out that “most opposition parties in Slovakia currently exploit the natural fears of war,” among the population and their worries over its impact on the energy and food prices.

She argues that the so-called “bread issues” could become the main source of criticism of the government’s decisions on Ukrainian refugees and sanctions against Russia, and that could be ultimately directed against the EU’s collective action on these issues.