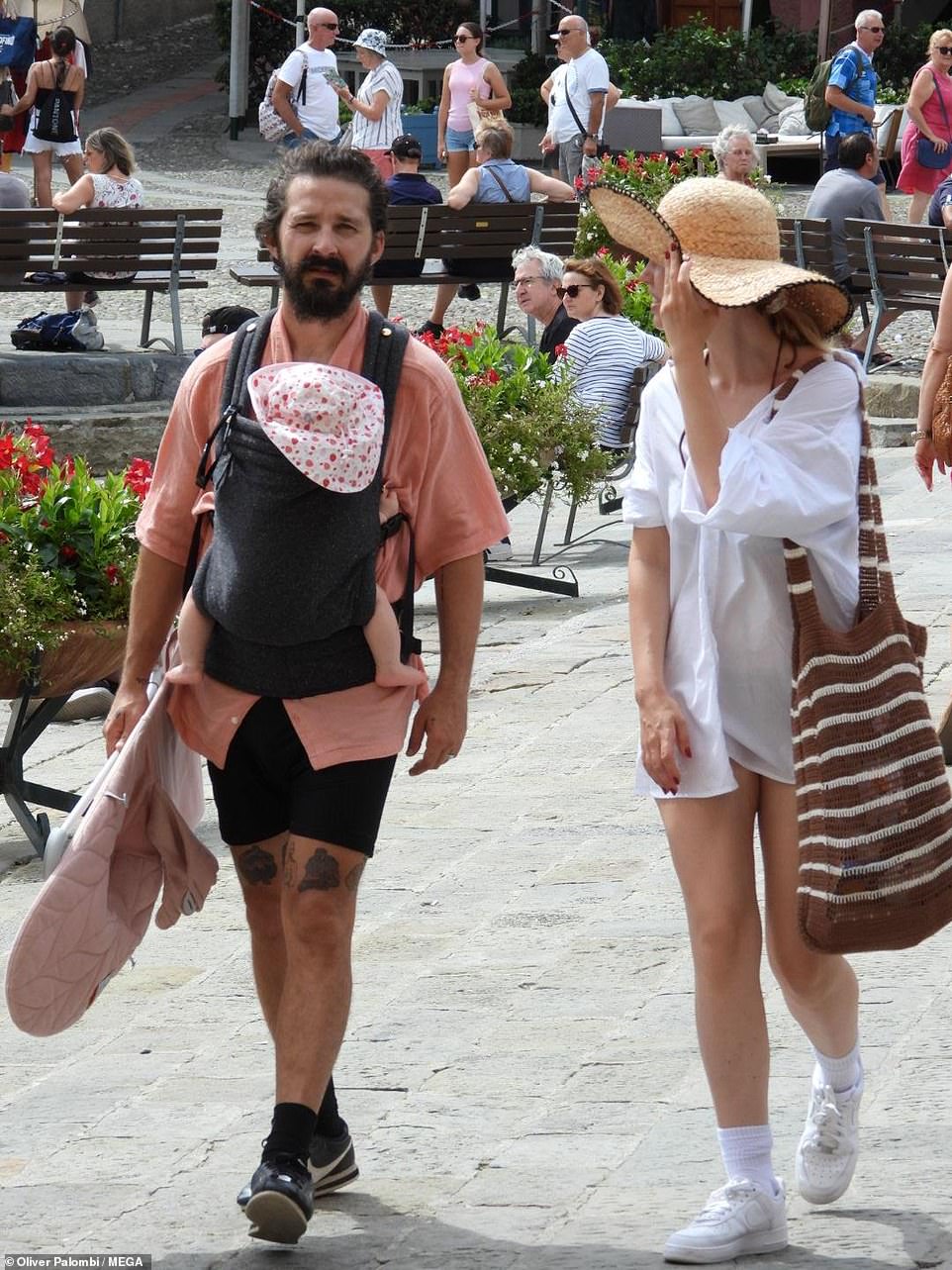 Shia LaBeouf looked like he had no worries in the world vacationing with his wife and baby after getting caught up in the drama surrounding Olivia Wilde’s much-discussed film Don’t Worry Darling.

The 36-year-old actor was seen taking a dip in the sea with his wife Mia Goth, 28, while vacationing in Portofino, Italy with five-month-old daughter Isabel.

Last month, Shia angrily denied Olivia’s claims that he was fired from her film for his “combative energy” and provided evidence to the contrary — citing a video of the actress begging him to stay attached to the project.

Family fun: Shia LaBeouf was seen taking a dip in the sea with wife Mia Goth, 28, while vacationing in Portofino, Italy with five-month-old daughter Isabel

Making a splash: The happy couple enjoyed a dip in the sea together

Since then, the thriller has been plagued by further drama, with lead actor Florence Pugh noticeably avoiding any interaction with Olivia at the Venice Film Festival.

But Shia looked a world away from all the controversy while on vacation, showing off his collection of tattoos while swimming in a pair of black off-duty boxer shorts.

His short brown locks were tousled as he sported a beard and kept his eyes protected with shades of black.

He looked just like the doting father when he strapped his daughter to his chest in a baby carrier as he strolled through the city on the Italian Riviera.

Out and about: The 36-year-old actor was later seen wearing an orange short-sleeved shirt, black shorts and black Nike Cortez sneakers

Aww: He looked just like the doting dad when he strapped his little daughter to his chest in a baby carrier as he strolled through town on the Italian Riviera

Rocking it: he swam in a pair of black Ex-Officio boxer shorts

Body art: he showed off his impressive collection of tattoos

One with water: Shia paddled along

There with him: Mia seemed comfortable in the water

Wow factor: Mia showed off her impressive post-baby body in a brown bikini

Mia showed off her impressive post-baby body in a brown bikini while swimming in the sea.

Shia and Mia started meeting in 2012. They married in Las Vegas in 2016, but divorced two years later, and Shia was involved with both FKA Twigs and actress Margaret Qualley during that time.

Time to bond: The happy couple spent time in the shade with their bouncing baby girl

Up and Down: Shia and Mia started seeing each other in 2012. They married in Las Vegas in 2016, but divorced two years later, and Shia was involved with both FKA Twigs and actress Margaret Qualley during that time.

Sweet: The couple reconciled some time after the Honey Boy actor and Margaret broke up. They were then seen wearing wedding rings in March 2020, according to E!

Moving on: Shia pulled on his button-up shirt as they prepared to leave

Happy together: Mia cuddled with their daughter

The couple reconciled some time after the Honey Boy actor and Margaret broke up. They were then seen wearing wedding rings in March 2020, according to E!

This comes weeks after Shia publicly denied director Olivia Wilde’s claims that he was fired from her film Don’t Worry Darling for his “belligerent energy.”

The actor instead insisted on stopping the project.

In support of his claims, a video by Wilde was leaked online on Friday, August 26, which clearly shows the director begging LaBeouf to stay with the project, and hinting at tensions with his future co-star Florence Pugh by saying that he would go away. a ‘wake-up call for Miss Flo.’

Controversy: Shia is embroiled in drama with Olivia Wilde over disputed claims about how he left her movie Don’t Worry Darling; Wilde pictured 2022

Days earlier, Wilde, 38, gave an interview to Variety, where she said LaBeouf’s trial was “not conducive to the ethos I demand in my productions” after the role was eventually recast with her now-boyfriend Harry Styles.

Styles, 28, plays the character Jack alongside protagonist Florence Pugh, who reportedly had some “tension” with LaBeouf.

However, LaBeouf replied when he provided alleged evidence that disproved Wilde’s claims, including an email he sent to the director and a video she sent to him, which was later leaked online, proving that he was running away from the film.

Real-life drama: Wilde claims she fired LaBeouf from the project, but the actor insists he actually quit

LaBeouf claims that on August 17, 2020, he “stopped the film due to lack of rehearsal time” and forwarded Variety two emails that he said he recently sent to Wilde.

In his messages to Wilde, LaBeouf states, “You and I both know the reasons for my departure. I stopped your film because your actors and I couldn’t find time to rehearse.’

In the email, he refers to his troubled relationship with FKA Twigs and also spoke about his daughter Isabel, whom he shares with partner Mia Goth.

Some studio sources claimed in the publication that LaBeouf had been fired, while another said it was due to a “collective acknowledgment that LaBeouf’s acting style did not fit well with Wilde’s approach as a director.”

Variety reports that LaBeouf sent the publishing screenshots of his conversations with Wilde, who claim they met in person to discuss his departure from the project.

In the email to Wilde, LaBeouf acknowledges his relationship with Twigs, writing, “My shortcomings with Twigs are fundamental and real, but they are not the story presented.”

Twigs – real name Tahliah Debrett Barnett – in a lawsuit accused LaBeouf of knowingly giving a sexually transmitted disease and also accused him of “relentless abuse,” including sexual assault, assault and inflicting emotional distress. He has denied the claims.