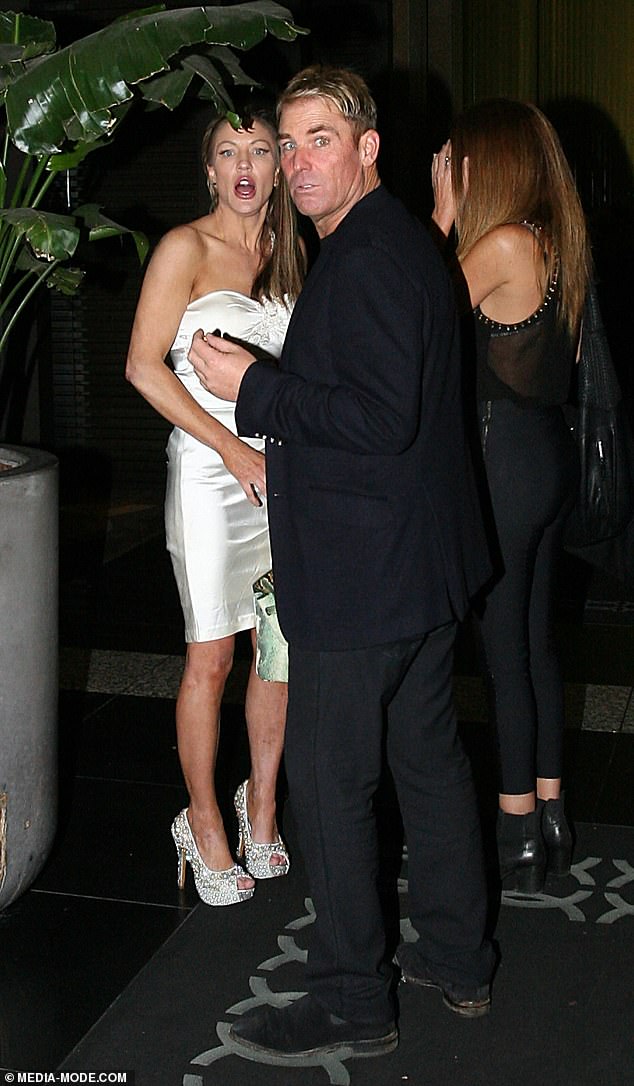 Shane Warne was the victim of a ‘classic honey trap’ when he was caught red-handed trying to sneak into Brynne Edelsten’s home for a ‘naughty nightcap’.

Edelsten’s boyfriend at the time Cemre Volkan has finally revealed how they plotted with a Melbourne paparazzo to stitch up the late cricketer on that infamous night in May 2016.

The couple’s plan – which they pulled off without a hitch – involved Edelsten charming Warne at a charity event in Geelong before agreeing to meet up later at her apartment.

Warne was sprung on arrival by the photographer who was conveniently waiting outside to get the money shot of him looking like a rabbit in the headlights as Edelsten feigned surprise.

The tryst that never was: How Brynne Edelsten (left) stitched up Shane Warne (centre) by tipping off the paparazzi about their ‘naughty nightcap’ in May 2016

The infamous tryst-that-never-was between the notorious ladies’ man and socialite made headlines around Australia.

Edelsten and Volkan – who was waiting upstairs – got a cut of the sale when the photos plus text messages exchanged between her and Warne were published in the tabloids.

Warne soon worked out he’d been played and later publicly accused Edelsten of setting up the pictures herself.

Exposed: Brynne’s ex-boyfriend Cemre Volkan (right) has told Daily Mail Australia they plotted with a Melbourne paparazzo to stitch up the late cricketer in a ‘classic honey trap’

Volkan, speaking to Daily Mail Australia six years after the incident, confirmed the leg spinner’s hunch was right all along.

He said Edelsten, now 39, staged the photos for ‘money and exposure’, using Warne – who died aged 52 last month – as a pawn in her quest for publicity.

‘It was a classic honey trap. I was there. I was involved. Brynne tipped off the paparazzi,’ Volkan said.

Not happy: The couple’s plan saw Edelsten charm Warne at a charity event in Geelong before agreeing to meet up at her apartment. A photographer was waiting outside to get the money shot of Warne looking like a rabbit in the headlights as Edelsten feigned surprise

‘The plan had been simple. Lure Warnie back to Brynne’s apartment, have him wait there until Brynne came down and then let the paps do their thing.

‘Warnie fell right into the trap. Once the photos had been taken, Brynne ran upstairs to her apartment where I was, leaving him licking his wounds on the street.

‘It was all done for the money and exposure – and it worked.

‘I actually felt sorry for Warnie. Brynne really stitched him up.’

Volkan said Edelsten had been constantly texting the paparazzo on the night in question.

Coming clean: ‘It was a classic honey trap. I was there. I was involved. Brynne tipped off the paparazzi,’ Volkan said this week

She first alerted him when she and Warne went from the charity gala in Geelong to Crown Melbourne, before taking separate taxis to Edelsten’s apartment.

The photographer managed to take photos of the pair smoking outside the casino before Warne hurried back inside with Edelsten.

This spooked the ‘King of Spin’, who looked appalled later that night when he arrived at Edelsten’s flat and was confronted by the same pap, confirming his suspicions.

‘Warnie clearly wasn’t happy, which you can see in the text messages he sent to Brynne that night complaining about the paps being around,’ Volkan said.

‘Why is this finally coming out now? I just think it’s fair that everyone knows Warnie was right on the money about what went down that night. It was a stitch-up.’

Speaking out: The photographer who took the pictures confirmed Volkan’s account to Daily Mail Australia, describing the incident as ‘just a bit of mischief’. Pictured: Brynne Edelsten

The photographer who took the pictures confirmed Volkan’s account to Daily Mail Australia, describing the incident as ‘just a bit of mischief’.

‘Think about it. There’s no way I’d magically be outside someone’s address at 1am in the morning unless I’d been tipped off to be there.

‘Brynne pulled the whole thing off brilliantly, obviously with help from Cemre, and I’m sort of glad the record is now finally straight on this one.

‘At the end of the day, no one was hurt. Sure, it was a little embarrassing for Warne, but on the scale of what he’d previously dealt with in his personal life, it was nothing.

‘For Warnie, it was the night that never was. He’s bowled plenty of maidens in his career, but on this night he was out leg before.’

Relationship: Brynne (left) began dating bodybuilder Volkan (right) after the breakdown of her marriage to Dr Geoffrey Edelsten in 2014. The on-off couple split sometime in 2016

In the published photos, Warne looked horrified as he arrived at Brynne’s doorstep for a ‘nightcap’ only to be greeted by the flash of a paparazzo’s camera.

He was understandably upset and it was clear he knew what was going on.

At the time, Warne accused Brynne of alerting photographers and setting him up, writing on Facebook: ‘Some people never cease to amaze me.

‘Listen to this one. After a fun night raising money for breast cancer in Geelong last night, me and a few friends plus Brynne Edelsten went out for a couple of drinks.

‘Brynne then invited me back to her place around 1am for a nightcap. When I arrived, paparazzi were conveniently waiting outside her home to get the pic. Coincidence?

‘I left instantly and thought how sad is that!’

‘Can’t wait to devour you’: Screenshots of the text messages exchanged between Warne and Edelsten showed the retired cricketer’s intentions for the night

Leaked texts exchanged between Warne and Edelsten reveal he was somewhat aware of photographers, but wanted to see the socialite regardless.

One of the cricketer’s saucy messages said: ‘Can’t wait to devour you.’

‘That pap is still out the front,’ Edelsten replied.

‘Annoying! Good we are leaving separately… I will wait 15 mins then, can’t wait,’ Warne wrote back.

Ever the gentleman, Warne made sure Edelsten had arrived home safe as he pushed for details of how to find her apartment.

Frantic: Warne seemed frazzled in his messages to the socialite before heading to her place

Cryptic: Edelsten told Warne her ex would ‘kill’ her if he found out about their meet-up

‘You excited? X’ he asked before adding ‘Brynne?… What’s going on?… Are you coming to get me?’

She later texted him: ‘Did you know that pap would be there? My ex [Geoffrey Edelsten] is going to kill me if that comes out.’

Warne responded: ‘No idea! Are you coming to get me?’ This is where the conversation ended.

Life of luxury: Brynne once lived a privileged lifestyle with her ex-husband, the late Melbourne businessman Geoffrey Edelsten. (Pictured together during their marriage)

Wedding: Brynne, a fitness instructor from California, met Geoffrey, 40 years her senior, in October 2008. They wed in a lavish ceremony at Crown Melbourne in 2009, which reportedly cost $3million. He was 66 and she was 26

Speaking to The Kyle and Jackie O Show after the incident, Brynne claimed she had never spoken to Woman’s Day magazine, which first reported on the leaked texts.

She blamed a ‘friend’ for selling the magazine screenshots of her text message exchange with Warne, which ran alongside her quotes.

However, Woman’s Day editor-in-chief Fiona Connelly said Edelsten did sell the private texts from the cricketer via a press agency.

Baby joy: Brynne has welcomed her first child with a mystery man

Brynne, who has welcomed her first child with a mystery man, was married to late Melbourne businessman Dr Geoffrey Edelsten from 2009 to 2014.

She met Geoffrey, who was 40 years her senior, in October 2008 and wed in a lavish ceremony at Crown Melbourne in 2009, which reportedly cost $3million.

She began dating bodybuilder Volkan after the breakdown of her marriage to Dr Edelsten in 2014.

Volkan was jailed for almost two years in 2018, after police found an ‘Aladdin’s cave’ of drugs and weapons at his Docklands apartment.

Warne, considered one of the greatest cricketers of all time, died of a suspected heart attack on holiday in Thailand on March 4. He was 52.

Rest in peace: Warne, considered one of the greatest cricketers of all time, died aged 52 of a suspected heart attack on holiday in Thailand on March 4. (Pictured in August 2018)