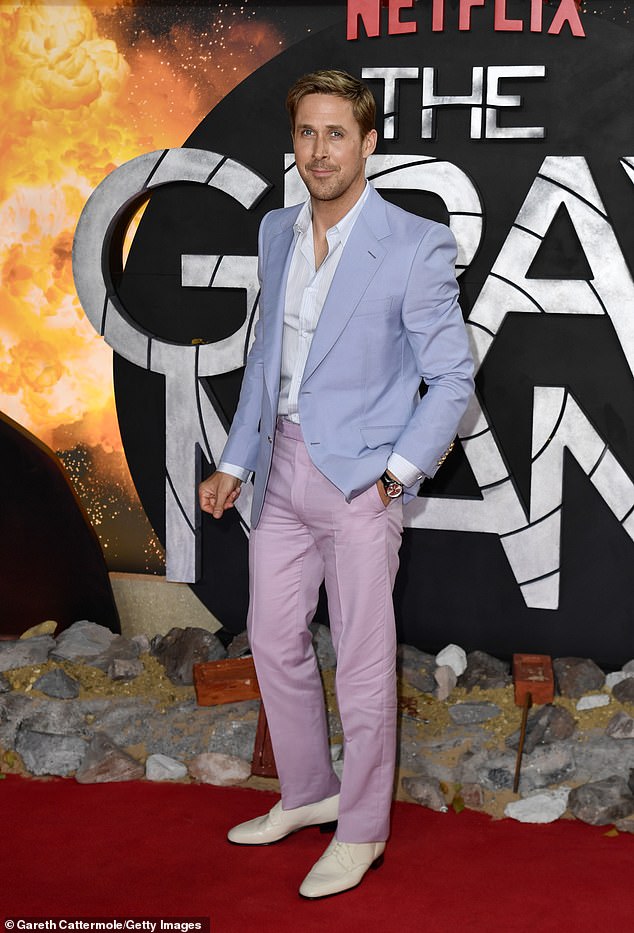 Ryan Gosling is set to return for the sequel of his newly-released spy thriller The Gray Man, directed by Anthony and Joe Russo – the duo behind Avengers: Infinity War and Endgame.

The original film, based on the 2009 novel of the same name by Mark Greaney and follows CIA operative Court Gentry (Gosling) as he battles it out against his former ally, Lloyd Hansen (Chris Evans), is currently Netflix’s most expensive film ever made, with a whooping budget of around $166millon.

‘The audience reaction to The Gray Man has been nothing short of phenomenal,’ the Russo brothers said in a statement, obtained by Variety. ‘We are so appreciative of the enthusiasm that fans across the world have had for this film.’

More to come: Ryan Gosling is set to return for the sequel of his newly-released spy thriller The Gray Man, directed by Joe and Anthony Russo; seen at the movie’s screening earlier this month

They added: ‘With so many amazing characters in the movie, we had always intended for the Gray Man to be part of an expanded universe, and we are thrilled that Netflix is announcing a sequel with Ryan, as well as a second script that we’re excited to talk about soon.’

Netflix Inc and the movie’s directors were hopeful the big-budget, effects-filled thriller in the spirit of a James Bond adventure would launch the company’s own long-running spy series.

Exciting: The original film, based on the 2009 novel of the same name by Mark Greaney and follows CIA operative Court Gentry (Gosling) as he battles it out against his former ally, Lloyd Hansen (Chris Evans), is Netflix’s most expensive film ever made, with a budget of around $166millon

‘Whether it’s exploring the events after the original Gray Man movie, or before, or where we choose to go, there’s a lot of options in this universe,’ Anthony Russo said.

Speaking about the comparisons the movie has drawn with other spy films, such as James Bond and the Bourne franchise, Joe Russo told Elle: ‘Well, this is a modern story.

‘I think that Bond is about 60 years old at this point and Bourne’s about 20 years old, and this film is connected in a lot of ways to some issues that are going on in the world right now.

The Gray Man is the most expensive Netflix film ever made, with a budget of around $200million (£166millon) – and boasts a star-studded cast, including former Bond girl Ana De Armas (left) and Bridgerton’s Regé-Jean Page (right), who’s been tipped to become the next 007

‘The character is exceedingly existential, quite funny, and we just find that it fits our sense of humor. It’s the kind of film that we feel would work well with today’s audiences.’

But Page, hotly speculated to be the next Bond himself and who plays CIA boss Denny Carmichael in the film, previously described The Gray Man as a blend between the James Bond and Jason Bourne franchises.

Directed by Anthony and Joe Russo – the duo behind Avengers: Infinity War and Endgame – the story sees top agent Gentry uncover a dark secret within the agency, all while being hunted by his ex-colleague and a slew of international assassins. Pictured, Chris Evans as Lloyd Hansen

He said: ‘It’s a global travel adventure, but with spies, explosions, guns, falling out of airplanes . . . there’s nothing that isn’t in this movie.

‘It has this “How is this dude still on his feet?!” factor. It has that suave suits and sophistication, “Bond factor”. And it has that hyper-real, hyper-violent “Bourne factor”.’

Gosling’s lead character is a former inmate sprung from prison by the CIA in exchange for servitude in a secret program.

‘I’ve always wanted to make an action movie,’ Gosling told Reuters. ‘Action was my first love. It made me fall in love with movies in the first place. It took a minute to get there and find the right one.’

The movie – which was filmed at seven locations around the world from Azerbaijan to Croatia and France – packs in nine major action sequences, including a lengthy gun battle in a public square in Prague.

‘We wanted to be very ambitious with this movie,’ director Anthony said. ‘It is hard to shoot action. It’s expensive to shoot action, and Netflix was up for this level of ambition.’

‘It was real trial by fire for me having it be my first action film,’ Gosling said.

Chris Evans plays Gosling’s nemesis, an assassin named Lloyd Hansen who was expelled from the CIA for excessive tactics.

‘He’s unapologetically himself,’ Evans said of the character. ‘I think most of us walk through the world measuring who we are based on who we think we’re supposed to be, and Lloyd is unbound by those social norms.’

Yet reaction for the film from critics has been mixed.

The Times’ Tom Shone said: ‘Throw the Bourne, Bond, Mission: Impossible and Fast and Furious franchises into a blender and keep your finger jammed on the button for the length of time it takes to make a banana smoothie and — voilà — you might end up with a film like The Gray Man; you’ll forget it the moment you stop watching it.’

However, numerous critics have ridiculed the thriller, with one calling it ‘formulaic, bland, unoriginal, and disappointingly mediocre.’

Another claimed the movie ‘never gave the audience a reason to care about the mission or characters’ and said it lost ‘all tension and excitement’ due to its ‘absurd editing.’

A third said they weren’t ‘able to name a memorable thing about it’ a few days after watching it and that it was tough to recall even ‘five characteristics of the hero.’

A DailyDot reporter said Gosling’s character had ‘no personality,’ and that she could tell the movie ‘was going to be a slog within the first 90 seconds’ – when it opened with Thornton’s character delivering a long and boring speech.

‘The characterization is so bland, it saps the energy out of beloved movie stars,’ the outlet wrote in its review, adding that the script is ‘so formulaic it may as well be generated by an algorithm.’

Directed by the Russo Brothers (who were previously behind some of the Avengers movies), the filmis about a top CIA agent who uncovers a dark secret within the agency

However, numerous critics have ridiculed the thriller, with one calling it ‘formulaic, bland, unoriginal, and disappointingly mediocre’

‘Movies like The Gray Man live or die on their action sequences,’ it continued. ‘Sure, the concept is unoriginal – a man on the run, some evil mercenaries, a kidnapped girl – but no one watches these movies for the plot. We’re here for fight scenes and car chases… which in this case are disappointingly mediocre.’

DailyDot compared the flick to a ‘cheap Jason Bourne rip-off,’ which ‘failed to elicit any sense of danger.’

The New York Times was also quick to bash the film, writing in a review that it’s made up of a ‘barrage of bullets and one-liners.’

‘The caffeinated cuts and pacing never allow the audience to find its footing in the film’s large, expensive set pieces, which prevents the action from becoming truly thrilling,’ it wrote.

Well-known movie critic Robert Ebert said the it felt like the Russos ‘ran off’ with Netflix’s money without ‘really caring what they delivered.’

Despite the negative response from critics, some fans who got to see the movie during early screenings have come to its defence online

‘People will watch The Gray Man by the millions. They just won’t be able to name a memorable thing about it a few days later,’ he said.

While it received a low score of 53 per cent from reviewers on Rotten Tomatoes, the audience gave the movie an 89 per cent.

And despite the negative response from critics, some fans who got to see the flick during early screenings have come to its defence online.

‘I loved The Gray Man. It was so good,’ one fan wrote on Twitter. ‘Chris did such an amazing job, I love watching him act.

Another added: ‘Just finished watching The Gray Man it was so so good! Definitely one of my favourites. Chris Evans, Ryan Gosling and Ana de Armas – my favourite trio. I need to rewatch the movie again.’