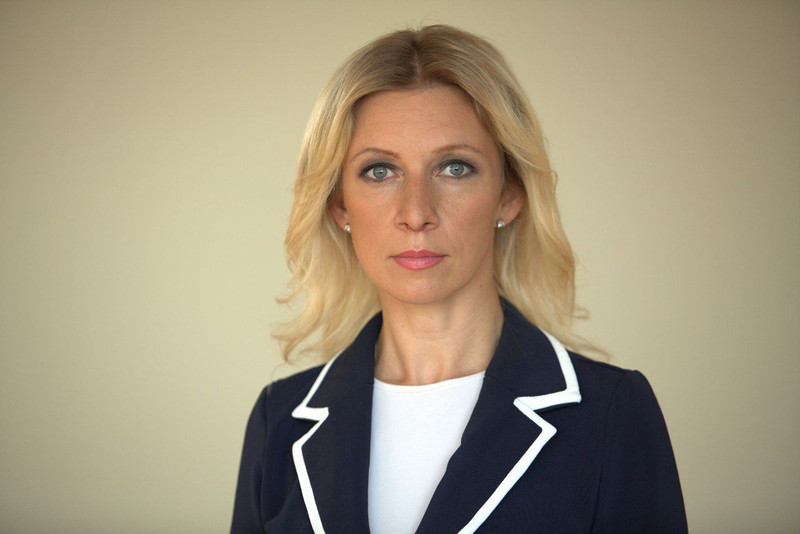 Some of Russia’s most prominent TV personalities, as well as several Kremlin cronies, have been added to the EU sanctions list putting an end, at least for now, to any thoughts of Italian shopping trips or French beach holidays.

Maria Zakharova (the Russian foreign ministry’s spokeswoman), Margarita Simonyan (the head of Russia’s RT broadcaster), Vladimir Solovyov (the anchor of the Russia One channel), and Pyotr Tolstoy (a talkshow host), were among 374 Russians put on a no-fly and asset-freeze list on Wednesday (23 February).

Zakharova, for instance, was listed for having “promoted the deployment of Russian forces in Ukraine,” the EU said in its sanctions update.

Zakharova is best known for her snappy, personal comebacks to EU decisions.

And she was on form on Wednesday — trolling Borrell back by saying he was only interested in “shopping and partying”, in a Western culture that “borders losing all humanity.”

Zakharova is also known for her designer dresses at the podium and the Russian foreign ministry has tried to cultivate her as something of a sex symbol, running photos of her in smoky eye-make up on Twitter.

The 46-year old Zakharova has got on board by posting selfies in her gym attire on social media.

In comments dripping with irony, Polish MEP and former foreign minister Radek Sikorski told EUobserver, in reference to Zakharova, that, “I have a soft spot for her because she helped to promote my book on Polish diplomacy.”

“She paid me the highest possible compliment by saying ‘Sikorski has only started telling the truth when he ceased to be minister’,” said Sikorski, adding that Europe should take strong action just the same: “ban the liars, I say.”

“They’re all top celebrities in Russia’s information war,” Anton Shekhovtsov, the head of the Centre for Democratic Integrity, a think-tank in Vienna, added.

“But I don’t think the Russian general public is the audience for these sanctions —it’s the elites. It’s a response from the elites that the EU is looking for,” he said. .

Other big names on the EU list were Yevgeniy Prigozhin, a Putin-friendly oligarch, his mother, his wife, and his company —The Internet Research Agency in St Petersburg — which the EU, on Wednesday, accused of “manipulating public opinion” against Ukraine.

They were joined by Sergei Shoigu (Russia’s defence minister), Anton Vaino (Putin’s chief of staff), and Igor Shuvalov, a former deputy PM and a millionaire banker, whose daughter, is a celebrity ballerina beloved by Russian media.

Most of the other named individuals, including 351 Russian MPs who voted for Russia to recognise parts of Ukraine as independent republics, are less well known.

They were added to 193 people and 48 entities that the EU previously blacklisted for Russia’s first attack on Ukraine in 2014.

In terms of sheer numbers, the move Wednesday by the EU made Russia 10 times more toxic than even Myanmar (which has 65 individuals and 10 entities under sanctions) and North Korea (57 individuals and nine entities).

Asked if it would now expand its own list of Europeans who are banned from visiting Russia, the Russian mission to the EU declined to comment.

The EU, the US, and the UK all came out with Russia sanctions this week, saying these were just a first step, in order to keep more sanctions in reserve in the event Putin goes further.

That ambiguity has prompted debate in Brussels about what Russian behaviour might trigger a second round of sanctions, but there may be more clarity in Washington.

“The next round will be more severe, include more banks, and be triggered by any further escalation — [Russian] missile/air strikes, moves across the line of contact, or non DPR/LPR-Russia border,” a US official involved in drawing up America’s sanctions, and who asked to remain anonymous, told EUobserver.

But if “banning the liars” from holidaying in Milan was cause for schadenfreude in Brussels, few believe Western sanctions will significantly dent Putin’s apparent determination to take back Russia’s “ancient lands,” as Putin referred to Ukraine on Monday.

“It’s almost impossible to stop Russia from invading Ukraine if that’s what Putin is determined to do,” said Jamie Shea, from British think-tank Chatham House.

“The only thing that could credibly stop Putin is the prospect of a Nato armed response, but the US and Nato have ruled out a military intervention as this would mean a European war,” said Shea, a former Nato official.

“Massive political opposition to Putin in Russia, such as street protests, or the defection of the Russian security and business elites,” might also stop war, he said.

“Yet we do not see this happening inside Russia where Putin has established absolute control,” he said.