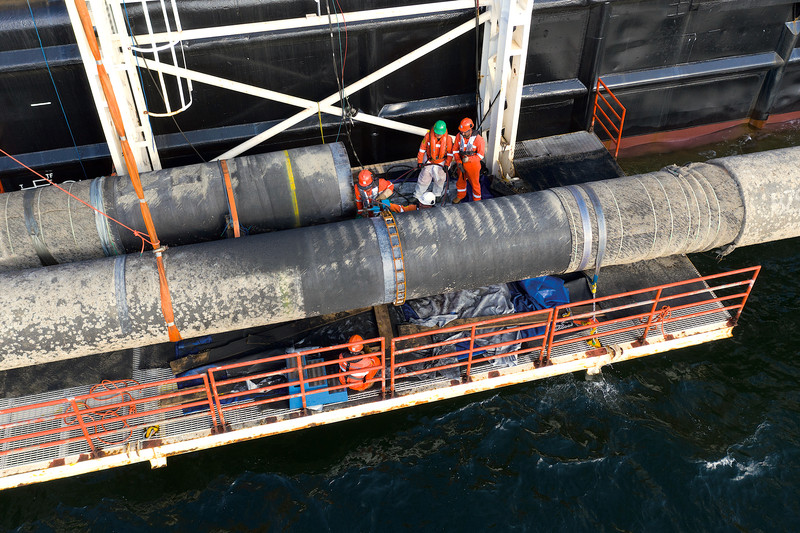 Russia delivered massively-reduced gas to Europe on Wednesday (27 July) — in a further escalation of the energy stand-off between Moscow and the EU, pushing prices further up.

Russia’s state-controlled Gazprom gas giant had warned that it would cut supply to 20 percent capacity of the Nord Stream 1 pipeline capacity, which links Russia and Germany.

Nord Stream 1 is a main artery for gas deliveries for Europe, and it accounts for around a third of all Russian gas exports to Europe.

The move makes it harder and more expensive for EU countries to fill up their gas storage before winter, adding to fears that EU countries might have to resort to rationing gas.

It comes a day after EU governments approved a watered-down plan to curb gas demand by 15 percent with the aim of lowering consumption and sharing supplies if Russia cuts all exports.

Concerns in Europe are mounting that if counties cannot fill up their storage, the economy could take another hit.

Moscow has blamed the delay in returning to full capacity in the Nord Stream on a technical issues.

Gazprom deputy CEO Vitaly Markelov said the company has still not received a Siemens turbine used at Nord Stream 1’s Portovaya compressor station, that had been undergoing servicing in Canada. Markelov also blamed the sanctions against Russia for the issue.

“As before, we see no technical cause” for the cuts, German government spokeswoman Christiane Hoffmann said in Berlin, adding: “What we are seeing here is actually a power play, and we won’t let ourselves be impressed by that.”

Wednesday’s cut in supplies comes less than a week after the pipeline restarted, following a scheduled 10-day maintenance period.

Concerns are mounting that Russia could stop gas flows completely during winter, which could push Germany — the largest EU economy, and the biggest Russian gas-importer — into recession, and increase energy prices and inflation even further.

Klaus Mueller, head of the country’s network regulator, said Germany could still avoid a gas shortage that would prompt rationing, while he told households and industry to “save gas”.

German industry groups, however, have warned companies may have to cut production if there is no approval to switch to more polluting fuels.

For his part, finance minister Christian Lindner said he was open to extending the use of Germany’s last three remaining nuclear power plants to avoid an electricity shortage.

The Dutch wholesale gas price for August, the European benchmark, were up seven percent, at €210 per megawatt hour on Wednesday, a 400 percent increase from a year ago, Reuters reported.