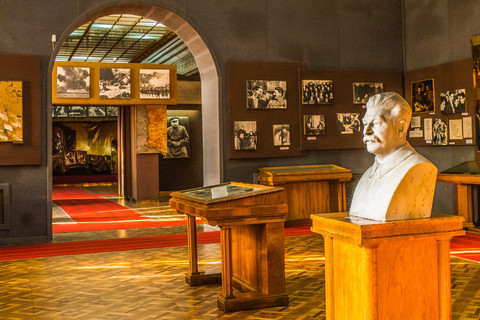 Russia has attracted international disgust for shutting down its most distinguished human-rights NGO.

The Supreme Court in Moscow ordered Memorial International to close on Tuesday (28 December) on grounds it had failed to stamp its books with the label “foreign agent” after having received Canadian, Czech, German, and Polish funding.

But state prosecutors themselves gave the lie to the verdict by saying it was also guilty of harming efforts to whitewash Soviet history.

“It is obvious that Memorial creates a false image of the USSR as a terrorist state by speculating on the topic of political repression of the 20th century,” Alexei Zhafyarov, a prosecutor, said at Tuesday’s hearing.

The court verdict was a “political decision” that was “reminiscent of the 1930s”, Memorial International’s lawyer, Henry Reznik, said.

Memorial International was created by Russians in the 1990s to document Stalin’s genocide of Russian, Ukrainian, Polish, and other people.

Its second branch, Memorial Human Rights Center, speaks out in defence of today’s Russian dissidents, but is also facing a lawsuit at the Moscow City Court, with a hearing due Wednesday.

The German foreign ministry, the US State Department, and the EU foreign service condemned Tuesday’s ruling.

The verdict was “more than incomprehensible”, Germany said.

By shutting Memorial, the Russian state “gave a devastating account of itself – it is fighting the processing of its own history of injustice and wants to monopolise individual and collective memory,” German NGOs said in a joint statement.

“You think people will now forget? Or not know what your predecessors did?,” former Estonian president Toomas Hendrik Iaalso said, addressing the Russian state.

“We here in Estonia know every name of everyone you murdered here. No one forgot,” he added.

The NGO closure culminated a year in which Russian president Vladimir Putin also jailed or forced into exile several other opponents of his authoritarian rule, such as Alexei Navalny.

It came amid Putin’s threats to invade Ukraine for a second time and to start a war with Nato.

It also came after years of attacks on Memorial activists as well as propaganda attempts to whitewash Stalin and Putin’s Russia.

Memorial’s Natalia Estemirova was murdered in 2009 for documenting Russian atrocities in Chechnya, for instance.

The Russian state broadcaster Ria Novosti, the same year, tried to hire Kreab, a Swedish PR firm in Brussels, to push the line “that Stalin was not such a bad guy”.

The amount of Russian people who considered Stalin a “great leader” doubled in the past five years to 56 percent, according to Levada, a Russian pollster.

Some 48 percent of Russian people also backed the idea of a new Stalin monument even though he murdered hundreds of thousands of them just three generations ago.

For some historians, such as Anne Applebaum, Putin’s pro-Stalin propaganda was frighteningly reminiscent of Nazi Germany’s march to war in the 1930s.

For other academics, the attack on Memorial showed the cultural poverty of Putin’s rule.

“Russia under Putin has created so little of value that the only way to show Russia’s greatness is to falsify the history of the Soviet Union so that Russia can shine in the light of past glories. That is the reason organisations like Memorial become threats to Putin’s regime,” Sweden’s Anders Östlund said.

When asked by EUobserver in a recent interview if modern Russia had anything to offer Europe in terms of soft power, Russia’s EU ambassador, Vladimir Chizhov, said: “Come on! Russia is a great country with a great history, with great culture”.

But for one EU diplomat, the harm that Stalin did to Russian society continued to be felt today.

“If you look at the great Russian writers, musicians, and other artists in history – almost all of them came before Stalin’s purges of the Russian intelligentsia”, the diplomat said.

“Russia has lost all soft power … what’s happening with Ukraine shows that all it has to offer its neighbours is hard power, threats of military action,” Ukraine’s EU ambassador, Vsevolod Chentsov, also recently said.