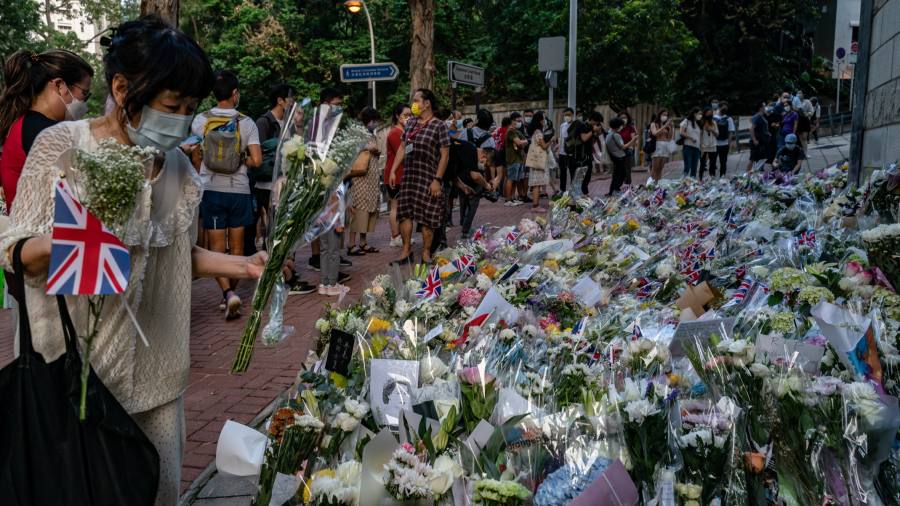 The death of Queen Elizabeth II has sparked a wave of nostalgia among some in Hong Kong for the territory’s pre-1997 “golden age” at a time when Beijing is clamping down on the city’s freedoms.

More than 2,500 people braved sweltering temperatures on Monday and queued for up to three hours outside the British consulate in the territory to lay flowers and pay tribute to the Queen, who was affectionately known to older generations as the “boss lady”. People resumed queueing outside the consulate on Tuesday, and were expected to continue doing so into next week.

While China’s president Xi Jinping sent condolences to the UK’s new monarch, King Charles III, and praised the Queen as having won “wide acclaim”, many pro-Beijing politicians in Hong Kong and conglomerates based in the Chinese territory have been muted in paying their respects.

But British colonial-era trading houses Swire and Jardine Matheson have remained silent in the days after the Queen’s death, although both companies later told the Financial Times that they had sent private messages of condolence to the British consulate. Her funeral is scheduled for Monday.

Beijing and the Hong Kong government have increasingly denied Britain’s role in the development of the financial hub. New school textbooks have attempted to recast the city’s history by describing it as an “occupied territory” that was never a colony.

The effort follows anti-government protests in Hong Kong in 2019 that led Beijing to introduce a national security law and clamp down on the territory’s once-vibrant media and civil society groups.

Beijing-backed newspaper Ta Kung Pao on Tuesday published a commentary criticising “political propaganda” for promoting nostalgia over the Queen’s death, saying it only reflected a “very small minority” of the population.

Yet buildings, streets and post boxes featuring the Queen’s royal cipher and Hong Kong dollar coins bearing her likeness are still in circulation in the city, which was ruled by Britain for more than 150 years until its handover to China in 1997.

The Queen was head of state in Hong Kong for 45 years, presiding over a period of rapid development that some regard as a golden age even though the territory was under foreign rule.

“I love and respect the Queen very much,” said 74-year-old Tung Lau outside the British consulate. “Back in the colonial days, we had always believed that we would have a better future.”

Lau said his daughter had joined a wave of emigration in response to Beijing’s attempts to exert greater control, moving to Canada.

Many exiled pro-democracy activists, including former student leader Nathan Law, have paid tribute to the Queen.

Even some of Hong Kong’s younger generation, born in the postcolonial era, had a sense of nostalgia for what they saw as a period when the city’s circumstances were “better”.

This is despite Britain’s governors never granting Hong Kongers universal suffrage, while colonial police were criticised for repressing anti-government protests and using a sedition law that is now being wielded against Beijing’s critics.

“I shed tears when I first heard of the Queen’s death,” said Jack Chan, a 23-year-old postgraduate student. “Those were the better days before 1997. Things have rapidly diminished especially over these past few years.”

Banker Monie Fong believed the Queen’s death reminded many of Hong Kong’s “golden era” between the 1950s and the handover, and highlighted the disappearance of the values and freedoms it once held.

The Queen visited Hong Kong twice in 1975 and 1986. Many older people living at a Kowloon public housing estate where she stopped still had vivid memories of the monarch.

An 86-year-old surnamed Chan recalled seeing the Queen in person as she passed by his vegetable stall at the public housing estate’s market, describing her as “really graceful”.