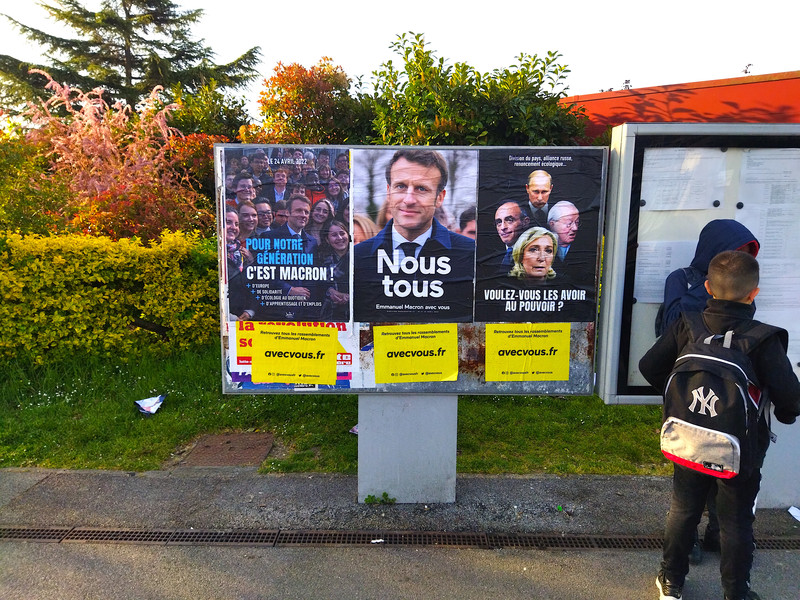 On Sunday (24 April), French voters are expected at the ballot boxes for the second and decisive vote in this year’s presidential elections.

There are now only two candidates to choose between: Emmanuel Macron and Marine Le Pen. But a third figure is ever so present: Russian president Vladimir Putin.

In the western parts of Paris-suburb Carrières-sous-Poissy most people are Muslim.

At least, that is the impression people living here have. One of Île-de-France biggest mosques is being built on a nearby field and many women wear headscarves.

It is not possible to know the exact number of Muslims living here, since it is forbidden by French law to collect information on race, ethnicity, or religion.

Here, only one presidential candidate seems to be left in the run-off: incumbent president Macron.

His posters are hung up on the strictly regulated billboards, installed by the town hall. By law, Le Pen, who wants to ban headscarves, is given equal space, but people here tend to tear her down as soon as she is hung up.

She does however appear on one poster — put up by the Macron team.

On it, she is accompanied by three men: her former rival, the far-right pundit Éric Zemmour, her rabble-rousing father Jean-Marie Le Pen, and on top of them all — Putin, who hosted Le Pen in Moscow in 2017 and loaned her party millions of euros.

“Division of the country, alliance with Russia, ecologic renouncement. Would you want them in power?” the poster asks passersby.

And most people here seem to agree that would be the case if Le Pen won.

“It is pretty obvious she has the support of Vladimir Putin, he wants her to win now that Éric Zemmour is out of the game,” Kadja do Santos, a full-time mother from the neighbourhood, told EUobserver.

“People here will not vote for her, many are Muslims and her ban on the veil is unpopular among them”, she said.

“I am sure Putin wants nothing more than for France to have a friend as a French president because that would weaken the EU”, another neighbourhood resident, Yusuf Abdallah said.

He voted for Jean-Luc Mélenchon in the first round, but will not vote at all the second round.

“I don’t have to choose between pest and cholera”, he said.

Dominique Reynié, head of the influential Fondapol think-tank and a professor at the Science Po University in Paris, told EUobserver that non-voters like Abdallah give Le Pen a chance of winning.

“If there is a low turnout, she could actually win and that would of course be a victory for Putin’s Russia. The war in Ukraine is already having a huge impact on Europe and France. The Macron campaign team are right when they point out Marine Le Pen’s ties to Russia, but for many voters that is not a problem”, Reynié said.

At a recent press conference, Le Pen said that “as soon as the Russian-Ukrainian war is over and has been settled by a peace treaty, I will call for the implementations of a strategic rapprochement between Nato and Russia”.

“Éric Zemmour lost support in the first round because of his admiration for Mr Putin while Marine Le Pen handled the crisis much better. She condemned the war firmly but still insisted France would benefit from an alliance with mister Putin, especially facing China”, Reynié said.

“You know, if you are not a superpower yourself, you need to be an ally of one or several. All superpowers commit evil acts, that’s how they stay superpowers. I think Marine Le Pen is wise to choose Russia over China for example”, do Santos, the Carrières-sous-Poissy resident, said.

It concluded that people in Europe considered Russia as very dangerous for its neighbouring countries but not very influential globally, while China was also considered very dangerous but on a much larger scale: for the whole planet.

“And they were not wrong. What astounds me today is that so many were surprised by the war, even as they new that Putin was dangerous to his neighbours. We are not prepared for war on this continent,” Reynié said.

“Europeans nowadays are used to a prosperous and safe life. We complain a lot, but are not really aware of what a comfortable life we live. That is the price to pay for a life in peace, but it also makes us vulnerable. An authoritarian like Vladimir Putin takes advantage of this”, he added.

Putin’s war probably will have consequences for France and Europe after the elections, regardless of who wins, Reynié noted, but what is important now is to take the elections seriously, he said.

“Many are sure that Macron will win and don’t think their vote is going to change anything”, the pollster and academic said.

“I’m not worried about the election. Le Pen won’t win. Macron will win regardless of me”, Abdallah, the Paris resident, said.