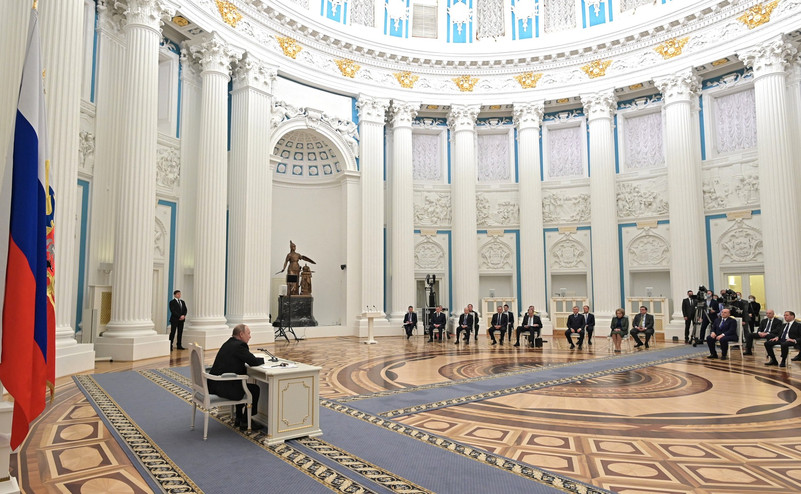 Russian president Vladimir Putin pledged to sign an order recognising the Donetsk and Luhansk People’s Republics (DPR and LPR) in a TV address on Monday (21 February), escalating a crisis that could lead to the biggest war in Europe since 1945.

Putin made the announcement in a rambling and belligerent speech about history in which he claimed Ukraine was not a real country, but one “created” by Russia in the 1920s on “ancient Russian lands”.

“So you [Ukraine] want de-communisation?” Putin asked. “That suits us. But let’s not stop half way. We are prepared to show you what real de-communisation looks like,” he said in what appeared to be a direct and hostile threat in light of the more than 150,000 soldiers already massed on Ukraine’s borders.

He also took a swipe at Nato, claiming that the Western alliance was an “aggressor” that was “commanding” Ukrainian troops.

Earlier in the day, Putin had warned the French and German leaders that he was going ahead with recognition of the republics.

The Europeans “expressed their disappointment with this development of the situation” but “indicated their readiness to continue contacts,” the Kremlin said.

For its part, Ukraine called for emergency UN talks amid the prospect that Russia’s regular troops and weapons systems would now pour into the DPR and LPR, which have been held by Russia-controlled paramilitaries since 2014.

And in Brussels, EU foreign affairs chief Josep Borrell promised that if Putin signed the DPR and LPR recognition order, he would convene EU foreign ministers to discuss imposing a new wave of punitive measures.

“Certainly, if there is annexation, there will be sanctions, and if there is recognition, I will put the sanctions on the table and the ministers will decide,” Borrell said.

EU “unanimity on the issue is guaranteed,” he said.

The EU and US crafted a sanctions package last April when Russia began its troop build up.

That package includes stopping a Russian pipeline to Germany called Nord Stream 2; it also would put curbs on Russian banks and impose asset-freezes and visa-bans on Russian oligarchs.

So far, Western allies have suggested that the full force of the sanctions would be felt only if Russia were to launch a large-scale invasion of Ukraine.

Borrell said the sanctions could be implemented tranche-by-tranche if Putin’s invasion proceeded step-by-step. The EU-US package “has certain elements which can be implemented with certain degrees, depending on the level of aggression,” Borrell said.

But for some in Europe, the aggression is already well under way and they say sanctions should already be in place.

Air France joined the list of international airlines no longer flying to Ukraine in a sign of the economic havoc the Russian threat was causing.

The US warned in its latest intelligence assessment on Sunday that Russia has hundreds of intelligence operatives inside Ukraine, whose job would be to assassinate prominent pro-Western Ukrainians, in what could be another step ahead of an invasion.

“I really do fear for Zelensky’s life,” an EU diplomat, speaking on condition of anonymity, told EUobserver, referring to the president of Ukraine.

“President Putin’s plan has already begun,” a British government spokesman was reported by Reuters as saying on Monday. “We’re seeing elements of the Russian playbook that we would expect to see in certain situations, starting to play out in real time,” he added.

For his part, Ukrainian foreign minister Dmytro Kuleba, speaking in Brussels prior to Putin’s DPR and LPR announcement, urged the rollout of the sanctions without delay.

“There are good reasons, good and legitimate reasons, to impose at least some of the sanctions now to demonstrate that the European Union is not only talking the talk about sanctions but also is walking the walk,” said Kuleba.

Putin said on TV that the USSR made a mistake to also let go of other former Soviet Republics.

That “means that not only Ukraine, but also Belarus, Moldova, and the Baltic States, members of Nato and the EU, are potential targets,” Polish former foreign minister Radek Sikorski warned on Twitter.

Latvia’s top leadership called for “robust economic sanctions against the Russian Federation and persons responsible for encroachment on Ukraine’s statehood.”

There were “no lows too low, no lies too blatant, no red lines too red to cross” for Putin, Lithuania’s prime minister said.

The leaders of France, Ireland, and Poland also called for immediate sanctions.

French president Emmanuel Macron “is demanding an emergency meeting of the UN Security Council as well as the adoption of targeted European sanctions,” the Élysée said.