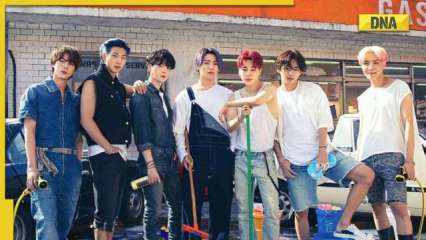 On Friday, the famous South Korean group BTS recently released the most anticipated anthology album Proof via BigHit Music. According to Billboard, the three-disc set serves as a look back at the K-pop idols’ last decade as a group, with tracks personally selected and curated by RM, Jimin, Jin, Jungkook, V, Suga and J. -Hope as a gift to ARMY and also includes brand new single Yet to Come (The Most Beautiful Moment).

BTS is promoting their new album release with pop-up stores in New York and Los Angeles. Fans lined up from 7 a.m. on Friday to be among the first to purchase exclusive items created especially for New York.

“It’s almost never in New York, it’s mostly LA — so for them to do it here, it felt like, they had to come,” fan Adriana Guzman said. Daniel Ealacios was directed to the store by his sister in Texas who hoped her brother would find him some products. T-shirts will sell for $55, hoodies for $120 and posters for $18.

The band released their new album “Proof” on Friday in a much-anticipated return to the music scene as they celebrate the ninth anniversary of their debut.

While the first two discs are available on streaming and digital retailers, the majority of Proof’s third disc is CD-only and filled with demos, deep cuts and a capella solo tracks like Still With You by Jungkook, Epiphany by Jin and group demos from Boy In Luv, Boyz with Fun, Seesaw and more, the shared outlet.

The accompanying music video for Yet to Come (The Most Beautiful Moment) was released on Friday alongside the anthology album, in which the septet promises their devoted fans that “the best time is yet to come” with a sincere and festive refrain. Ahead of the album’s release, each of the seven group members, in a series of intimate videos posted on BTS’s official YouTube channel, shared their reasons and inspirations behind the tracks they selected for “Proof.”

According to Billboard, the compilation’s release also coincides with the launch of the band’s #MyBTStory YouTube challenge, which invites ARMY to create YouTube shorts about their favorite memories with the band through July 9. (With contributions from ANI and Reuters)