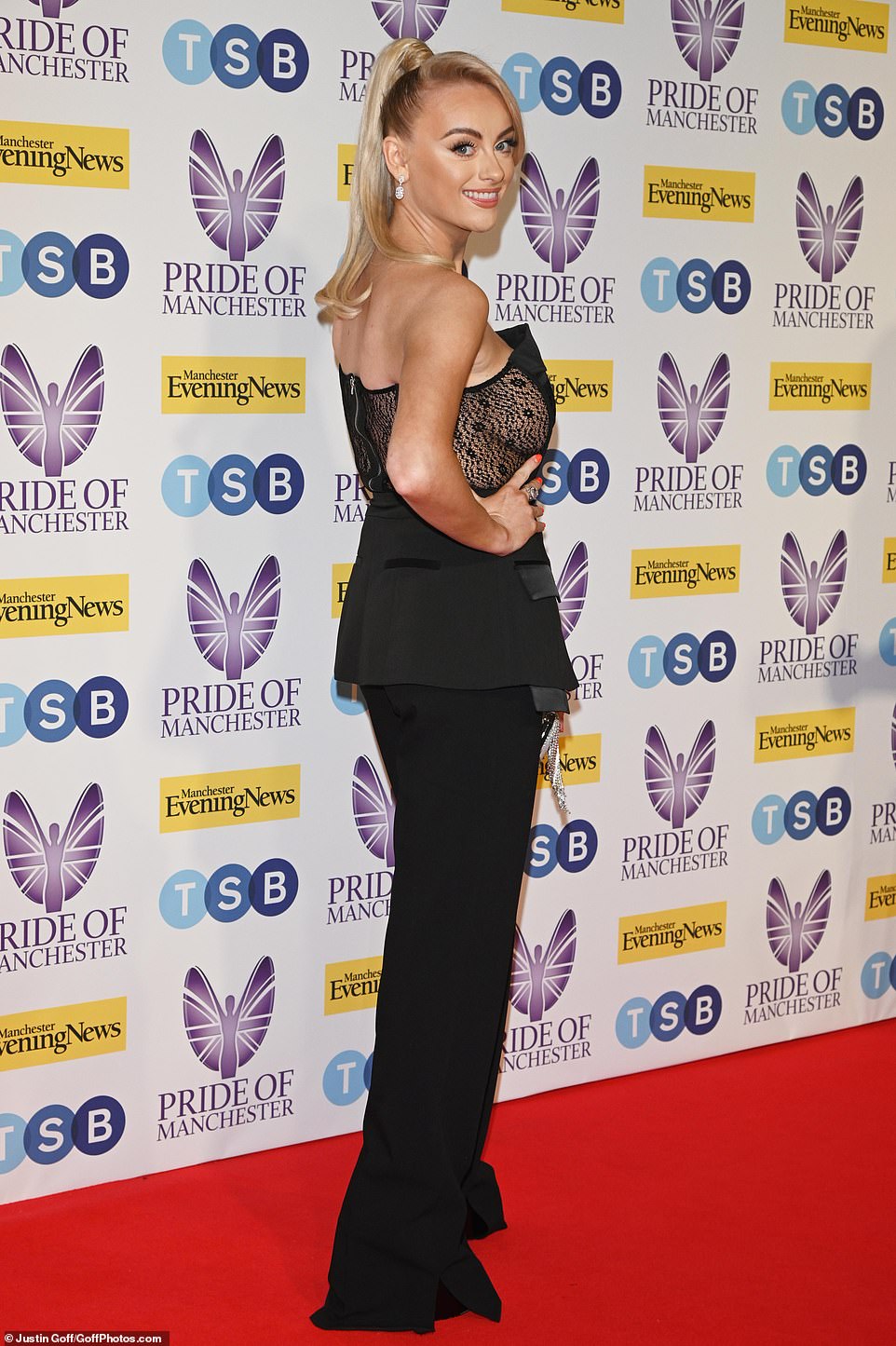 Katie McGlynn, Kym Marsh and Coronation Street’s Lucy Fallon were among the famous faces putting on glamorous displays at the Pride of Manchester Awards 2022 on Tuesday night.

Former Corrie star Katie, 28, looked incredible in a strapless black top with a sheer detail that she wore with a matching pair of trousers.

The actress, who most recently appeared in Hollyoaks, also wore a pair of matching heels while she added to her outfit with a white clutch bag.

Red carpet: Katie McGlynn, Kym Marsh and Coronation Street ‘s Lucy Fallon were among the famous faces putting on glamorous displays at the Pride of Manchester Awards 2022 on Tuesday night

Kym, 45, posed confidently in her bright blue dress that had statement shoulder pads and was teamed with a silver clutch bag and heels to boost her height.

She wore her dark tresses pinned up on her head in a chic up do while beaming for the cameras.

Lucy, 25, looked sizzling in her red silk dress which had a dramatic thigh-split and was teamed with a black bag and chunky heels.

She showed off her flawless complexion with a bronzed makeup look and wore her long blonde tresses styled into perfect curls.

Glamorous looks: Kym, 45, (right) opted for a blue midi number and Lucy, 25, (left) showed off some leg in a thigh-split gown

Pretty: Lucy looked sizzling in her red silk dress which had a dramatic thigh-split and was teamed with a black bag and chunky heels

Pose: Kym posed confidently in her bright blue dress that had statement shoulder pads and was teamed with a silver clutch bag and heels to boost her height

Stunning: Lucy looked sizzling in her red silk dress which had a dramatic thigh-split and was teamed with a black bag and chunky heels

Meanwhile, fellow soap star Nikki Sanderson, 38, wowed in a plunging mini dress that showed off her incredible figure on the red carpet.

Nikki made sure all eyes were on her in the thigh-skimming design which she accessorised with a delicate gold necklace while wearing her brunette tresses in loose waves and opting for a glam makeup look.

The awards are hosted by Kym and the evening will honour Manchester’s unsung heroes for the amazing things they do to bring together and nurture the city’s communities.

This year’s winners include courageous kids, amazing fundraisers, and awe-inspiring police officers – all of whom make Manchester the place it is today.

Cosy: Lucy and her footballer beau Ryan Ledson posed together on the red carpet

Star: Rebecca Adlington made sure to make a stunning appearance on the red carpet in a black lace dress

Looking lovely: The Chase star Anne Hegerty wowed in a black dress and chunky heels for her appearance

Elegant: Jorgie Porter looked chic in a white lace dress which she teamed with a nude coat

Natural: Jorgie opted for a radiant makeup look and wore her blonde tresses pinned in an up do

Handsome: Jorgie he boyfriend and Ollie Piotrowski looked great together

Elsewhere Fleur East showed off her toned legs in a black mini dress which featured dramatic bow detailing over her cleavage.

Meanwhile Rebecca Adlington made sure to make a stunning appearance on the red carpet in a black lace dress and strappy heels.

It comes after last month Kym attended the Pride Of Birmingham Awards 2022 with her ill father Dave and mother Pauline.

Kym revealed her father’s cancer diagnosis in June last year as she praised her ‘close’ family for helping each other through the awful news.

Couple: Paige Turley and Finn Tapp from Love Island looked as loved-up as ever as they posed on the red carpet

Curves: Paige looked incredible in her gold dress which showed off her gorgeous figure

All smiles: Beside her Finn looked dapper in a grey suit and white shirt

Glowing: Paige sported a radiant complexion and wore her blonde tresses in loose waves over her shoulders

She admitted: ‘It has been a very difficult time… The reality is that in Dad’s case it has now spread to his pelvis, spine, ribs and left leg, which is of course bad news.

The actress continued that doctors are ‘talking about it being incurable’ but also treatable and hope to extend her dad’s life.

She added that although Dave is still in ‘a lot of pain’, he is responding well to some hormone treatments.

In an emotional clip Kym broke down in tears as she spoke with her father after his incurable prostate cancer diagnosis.

Loved-up: Faye posed with her beau Teddy from Love Island who put on a quirky display in his patterned suits

Animated: She looked like she was having a great time on the red carpet

The presenter filmed the interaction with her dad Dave in a segment for TSWT Morning Live at the time to raise awareness of the disease.

It was revealed last month  that Dave’s cancer has spread to his pelvis, spine, ribs and left leg and is incurable after he delayed going to a doctor in lockdown.

The award shows website read: ‘Pride of Birmingham is back to celebrate our region’s unsung heroes, and host Kym Marsh can’t wait to meet them.

Sophisticated: Katie wowed in a strapless black top that had lace detailing around the bust

She said: ‘It’s great coming back to host the awards, I’m really looking forward to meeting the winners this time around.

Kym rose to fame in 2001, when she won a place in the band Hear’Say as a result of appearing on the reality television series Popstars.

Glamorous lady: She flashed some side boob in the sheer number which showed off her ample assets

Swimmer: Rebecca flashed her legs in the black dress which had long sleeves that featured lace detailing

Sexy: Victoria Ekanoye flashed her cleavage in a cut-out black dress which revealed her ample assets

Glam: Rachel Lugo wowed in a black velvet jumpsuit with a sheer section at the top

Animal-print: Seema Malhotra showed off some leg in a zebra-design dress and nude heels

Chic: Natalie Anderson put on a stylish display in a red suit and strappy black heels

Busty: Victoria showed off her ample assets in the daring dress

Here he is! Ranj Singh looked dapper in a grey suit and shiny black shoes as he posed with a glamorous blonde

Suave: The TV doctor posed up a storm in his suit which he teamed with a black waist coat

Fashionista: Sair Khan wore a black satin corset and carried a fluffy bag with her

Beautiful: Fleur added a pop of colour to her look with a slick of red lipstick

Looking chic: Rachel wore her long blonde tresses styled into perfect waves and posed up a storm on the red carpet

Bronzed: Seema sported a glow and wore her dark tresses in a blow dried style

Star: Noddy Holder wore a bright scarf for his appearance

Pals: Rachel and Seema posed together on the red carpet