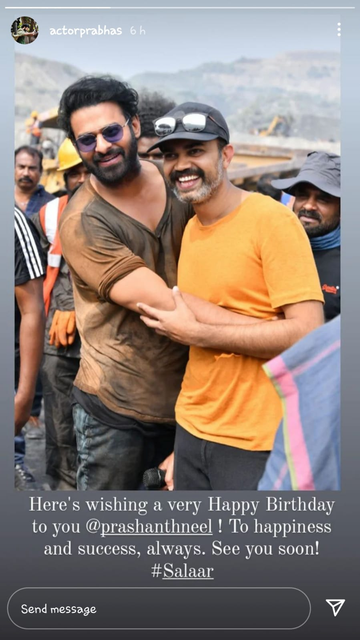 Baahubali star Prabhas took to his story on social media and shared a happy photo with filmmaker Prashanth Neel from the sets of his upcoming film Salaar to wish him a happy birthday. Picking up her caption, the star wrote, “Wishing you a very happy birthday @prashanthneel! Happiness and success, always. See you soon! #Salaar.” In the picture, Prabhas and Prashanth Neel can be seen having a happy time.

here is the photo

Prabhas and Prashant’s combo as an actor and director is insane and would be one of the greatest collaborations of all time. In the upcoming Salaar movie, Prabhas will be seen performing uniquely designed actions that will amaze the audience. The Bahubali and KGF franchises are one of the biggest franchises of decades and now that Prabhas and Neel are reuniting, Salaar looks more promising than ever.

Work-wise, Prabhas will next be seen in the mythological magnum opus, Adipurush, one of the most expensive films to be made in India, Nag Ashwin’s sci-fi ‘Project K’, the action thriller high octane Salaar and Sandeep Vanga’s Spirit which marks the 25th film of his career. On the other side, after Salaar, Prashanth will lead Jr NTR in #NTR31, and KGF Chapter 3 is also in the works.

To all the fans who were excited about KGF Chapter 3, here is some shocking news for you. Earlier, producer Vijay Kiragandur said that KGF 3 will be released in October and they are planning for a 2024 release. won’t start anytime soon.

Karthik Gowda, Executive Producer of Homebale Films, clarified that all of these reports are speculation, and they will begin work on the film with a bang, with an official announcement. Karthik tweeted, “The news circulating is just speculation. With many exciting projects ahead of us, we @hombalefilms won’t be launching #KGF3 anytime soon. We’ll let you know with a bang when we start working on it.”