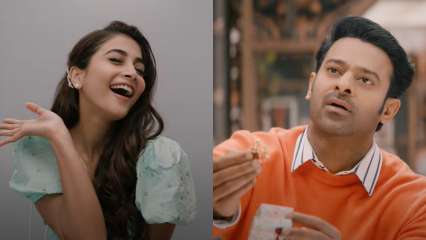 After the ‘Baahubali’ phenomenon, Prabhas’ films are highly anticipated by the entire Indian film industry and audiences across the country. The pan-Indian star has the sci-fi romance drama “Radhe Shyam” as his next release on March 11, in which he is paired alongside sizzling actress Pooja Hegde.

Celebrating the occasion of Valentine’s Day, Prabhas unveiled the special Valentine’s Day preview on his Instagram handle on Monday, February 14. Sharing the romantic poster and the bond with his fans and followers, Prabhas wrote, “Sending you all my love on this special day with some clips from my movie, #RadheShyam. Happy Valentine’s Day everyone!”

Prabhas plays a palm reader named Vikram Aditya and Pooja Hegde plays a doctor named Prerana in the upcoming movie. The 34-second clip shows Vikram in his flirtatious avatar trying to converse with Prerana in the film. In the special preview, Vikram is even shown getting down on his knees to propose to Prerana before she asks him how he still stayed single.

The trailer and posters have already intrigued fans and they can’t wait to see the movie on the big screen next month. Directed by Radha Krishna Kumar, the film is being shot simultaneously in Telugu and Hindi and will also be released in Tamil, Kannada and Malayalam dubbed versions.

Meanwhile, Prabhas and Pooja Hegde have some interesting movies coming their way. The star ‘Baahubali’ will be seen in ‘Adipurush’ which is based on The Switzerland Times mythological tale of Ramayana. It features Prabhas in the lead role, Kriti Sanon as Janaki, Saif Ali Khan as Lankesh, and Sunny Singh as Lakshmana. Pooja Hegde will star alongside Ranveer Singh in Rohit Shetty’s comedy-drama ‘Cirkus’, which is said to be based on William Shakespeare’s ‘Comedy of Errors’.