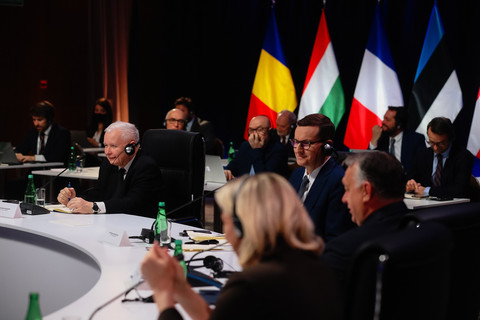 Poland’s de facto ruler has accused Germany of trying to create a “Fourth Reich” in the EU.

“There are some [EU] countries which are, to put it mildly, not enthusiastic at the prospect of a German Fourth Reich being built on the basis of the EU”, he said

“If we, Poles, agreed with this kind of modern-day submission we would be degraded,” he added.

Kaczyński is Poland’s deputy prime minister and the chairman of the ruling Law and Justice (PiS) party, but is widely seen as pulling all the levers of government from behind the scenes.

His Christmas interview mostly took aim at EU plans to withhold funds for Poland over a long-running dispute on rule of law.

The EU Commission – backed by rulings of the European Court of Justice – has done so on basis of grave concerns about Kaczyński stuffing Polish courts with pro-PiS loyalists.

But “blocking payments for Poland … is entirely illegal,” Kaczyński claimed.

“There is no meritocratic or legal basis, I repeat, no basis for this. It’s entirely illegal, violating rule-of-law and basic decency,” he said.

The EU top court in Luxembourg was an “instrument” of Germany’s fourth-reich machinations, he added.

And previous PiS statements indicate it was a party talking point rather than a slip of the tongue.

“There is no doubt, looking at the actions of the EU, that it is to be a continent under German hegemony … This is the implementation of the Fourth Reich,” Kaczyński’s deputy justice minister Marcin Romanowski said on TV earlier in December.

Meanwhile, the rule-of-law dispute is just one aspect of a wider clash between Poland and the EU’s liberal-democratic mainstream.

PiS has also attracted opprobrium by riding roughshod over press freedoms, the rights of LGBTI minorities and women, the historical victims of Polish antisemitism, and the dignity of migrants.

“There’s no doubt, that LGBTI ideology grew out of … the same root as Germany’s Hitlerian National Socialism, which was responsible for all the evil of World War II,” Przemysław Czarnek, a PiS MP, recently told Polish media.

And rhetoric aside, Kaczyński’s pushback against EU pressure has included openly courting its enemies, such as French far-right leader Marine Le Pen, whom he invited for a “summit” in Warsaw earlier this month in a bid to boost her French election bid next year.