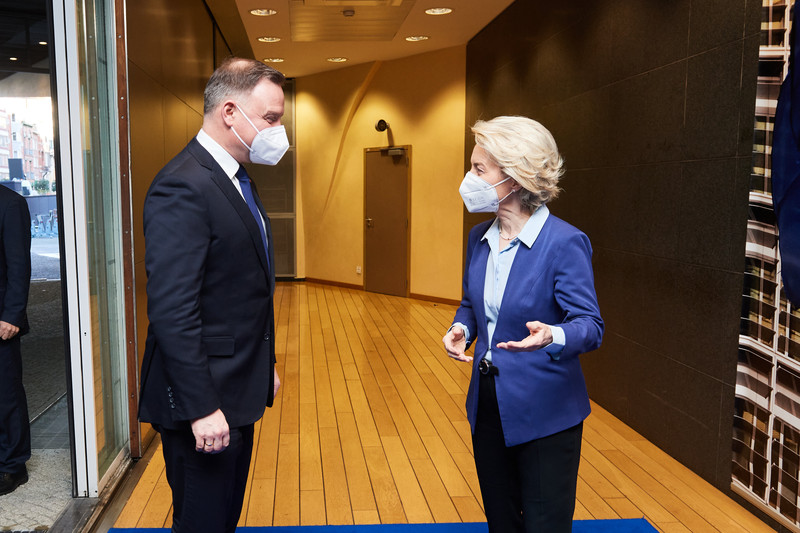 Polish president Andrzej Duda sought to resolve disputes with Brussels on Monday (February 7) – in what he said was a bid for EU unity, in the face of the large Russian military buildup on the border with neighbouring Ukraine.

During a trip to Brussels, Duda met with the head of the EU Commission, Ursula von der Leyen, the head of the European Council, Charles Michel, plus Nato secretary general Jens Stoltenberg.

Duda’s fence-mending with Brussels, which has been locked in a long-running legal battle with Warsaw over the government’s politicisation of the Polish judiciary, comes as US troops landed in Poland on Sunday to reinforce Nato allies.

In a sign of how anxiety about the Russian buildup may be changing the political calculus among some leaders in Europe, Duda made clear he wanted to ease conflicts with its existing allies.

“Any arguments within the EU are a favour for the opponents of European unity,” Duda said, in a thinly-veiled reference to Russia. “We should close all our disputes as soon as possible,” he said following his Brussels meetings.

Poland last week resolved a long-standing dispute with the Czech Republic over a polluting lignite mine – a case in which Warsaw faced fines of €500,000 per day.

Another incentive for Poland to improve its relations with the EU is the Warsaw government’s desire to tap Covid recovery funds, worth billions of euros.

Last week, Duda put forward a proposal to scrap a contested domestic disciplinary chamber for Supreme Court judges that has been at the heart of a fractious and long-running rule-of-law dispute with the EU.

That overture could help to unleash the bloc’s Covid-19 recovery money and spare the country around €70m in fines for breaking EU rules.

Duda said his proposal was met “with approval” and “relief” by both von der Leyen and Michel.

He called for “an end to the discussion between the European Commission and the Polish authorities” over the matter of the Supreme Court’s disciplinary chamber.

Duda is betting on opposition MPs to support his proposal, which is opposed by Law and Justice [PiS]’s coalition partner led by justice minister Zbigniew Ziobro.

But critics and some Polish judges have argued that Duda’s proposed bill does not go far enough in rolling back what is seen as political takeover of independent courts.

The commission will need to analyse the proposed bill in detail to give an official assessment.

The final word on ending all disputes with the EU will likely have to come from the country’s de facto leader, PiS chief and deputy prime minister Jarosław Kaczyński.

For her part, von der Leyen remained tight-lipped about what the commission would do if the Polish parliament approves the bill.

“Good exchange with president Andrzej Duda, on the security situation and Russia’s military build-up,” she tweeted.

“We also discussed the objective of having a robust judicial system in Poland, in line with EU standards,” von der Leyen added.

Duda is expected to join German chancellor Olaf Scholz and French president Emmanuel Macron in Berlin later in the week.