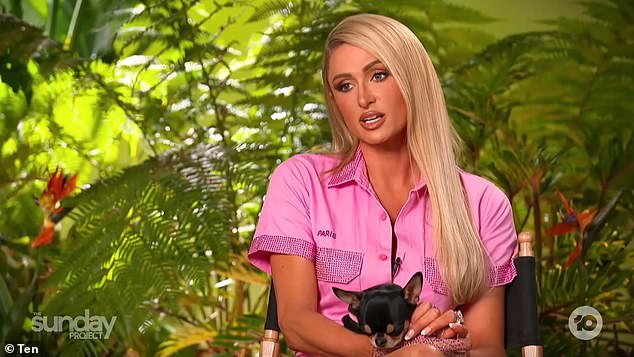 Paris Hilton addresses ‘toxic’ beauty standards on social media and the impact it can have on young people: ‘It’s not good for someone’s mind’

Paris Hilton spoke about the ever-changing beauty standards on social media during a candid interview on The Sunday Project.

The 41-year-old, who has nearly 19 million Instagram followers, said the overuse of filters and editing apps in today’s society can be “toxic” to young people.

“I can’t imagine being 12, 13 and seeing these beauty standards that aren’t real, and using the filters all the time,” Paris told host Lisa Wilkinson.

Scroll down for video

Speaking out: Paris Hilton has spoken out about the ‘toxic’ beauty standards seen on social media in recent years in a candid interview on The Sunday Project

“I think in some ways it can be very toxic.

“I just…I don’t know.” I think it’s not really good for someone’s mind at that age.

The Hotel Paris heiress shot to fame after starring on reality TV show The Simple Life from 2003 to 2007, alongside her best friend Nicole Richie.

Questions: When asked if she thinks people ‘underestimate’ her, Paris told host Lisa Wilkinson (pictured), ‘If they don’t know me, definitely’

She continued to dabble in acting and singing, while landing lucrative deals for clothes and perfumes before establishing herself as a club DJ.

In her 2020 YouTube documentary This Is Paris, the socialite insisted she created the persona of “Paris Hilton” to achieve fame and build a multi-million dollar business empire.

When asked if she thinks people “underestimate her,” Paris told Lisa, “If they don’t know me, definitely.

‘I’ve played this character from The Simple Life for so long in the public eye…I always like to be underestimated. I like to prove people wrong.

“I’m not a dumb blonde, I’m just really good at pretending to be one.”

Paris has since found her happily ever after and married Carter Reum during a three-day extravaganza last November.

In January 2022, she told Daily Pop that she would like to have “probably two or three” children with her new husband.

“It’s definitely one of my top priorities,” she said.

Family: In January 2022, she told the Daily Pop that she would like to have “probably two or three” children with her new husband. “It’s definitely one of my top priorities,” she said.