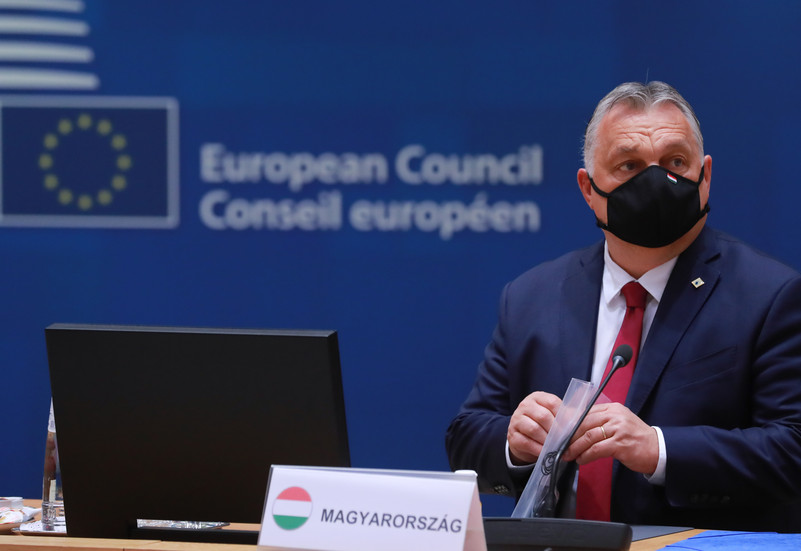 Orbán has long been a thorn-in-the-side of the EU for the way he has repeatedly turned to Russia, and Putin, to showcase alternatives to the liberal democratic model on which the EU was constructed.

And unlike French president Emmanuel Macron and German chancellor Olaf Scholz, Orbán did not make a stop in Kyiv when he visited Moscow this month.

Yet Orbán has often proved to be more bark than bite when it comes to his sympathies with Russia, and Putin himself.

And although Orbán is seen as the closest ally to Putin within the EU, he has never in his 12 years in power once blocked EU sanctions targeting Russia despite railing against them with reliable regularity.

“Sanctions, punitive policies, lecturing or any other kind of arrogance on the part of the great powers are out of the question,” Orbán said, earlier this month, about plans to slap sanctions on Moscow.

But by Tuesday, Orbán was on board, though he left much of the climbdown messaging to his foreign minister.

“Hungary’s position is clear: it supports Ukraine’s sovereignty and territorial integrity, as it has always done, and it does not disrupt European unity as it has never done,” Péter Szijjártó said Wednesday (23 February).

How far to go?

Despite the rhetoric, a number of prominent experts expect Orbán to stay in the EU’s corner as the crisis in Ukraine unfolds.

Orbán is good at identifying how far he can go in supporting Russia and then pulling back when he reaches a limit beyond which the EU could be threatened, according to Péter Krekó, the director of the Budapest-based Political Capital Institute.

Budapest, however, is likely to join with a number of other capitals, including Rome, Vienna, Berlin, which argue for cautious, gradual further steps, towards Russia.

“He will uphold the minimum of the Western consensus,” said Krekó, who explained that Budapest will join a number of capitals, including Rome, Vienna, Berlin that argue for cautious, gradual further steps.

“The issue of the sanctions has a strong normative coercive power on EU members, and they can’t get around it,” Krekó said. “They all cry ‘Barabbas’ separately, but in the end together they cry ‘Jesus’,” Krekó said.

Late on Wednesday, Hungarian government spokesman Zoltan Kovacs reiterated on Twitter that Orban was committed to “joint EU policy” on Russia at the summit on Thursday.

To be sure, Orbán’s sympathy for Putin has brought Hungary into the limelight, but there are plenty of other member states concerned at how EU sanctions against Russia could hurt them economically.

Steven Blockmans, director of research at the Brussels-based Centre for European Policy Studies, said Orbán will not be the only EU leader who will have difficulties agreeing on when the next level of sanctions should be triggered.

Blockmans put EU member states into three categories vis-a-vis Russia: the “cold warrior group” with Poland and the Baltic states that have been arguing for the most pro-active EU stance; the “trojan horses of Russia” including Hungary, Bulgaria, Cyprus, Greece, which are friendlier to the Kremlin for economic and financial reasons.

The third group was comprised of “dovish” members like Germany and France that would still like to see diplomatic settlement but hardened their positions after Putin’s decision to kill off the Minsk agreement, Blockmans said.

What truly distinguishes Orbán from other Russian-friendly EU leaders, is that his government is the only one to to identify Russia as its model in terms of building an illiberal state, including cracking down on free media and civil society and curbing judicial independence.

But that may be part of a longer term strategy that, for Orbán, goes well beyond the strength or otherwise of sanctions on Russia.

“There are a combination of factors at play, including the overriding aim of Orbán and his clique to undermine the supranational character of the EU,” said Blockmans.