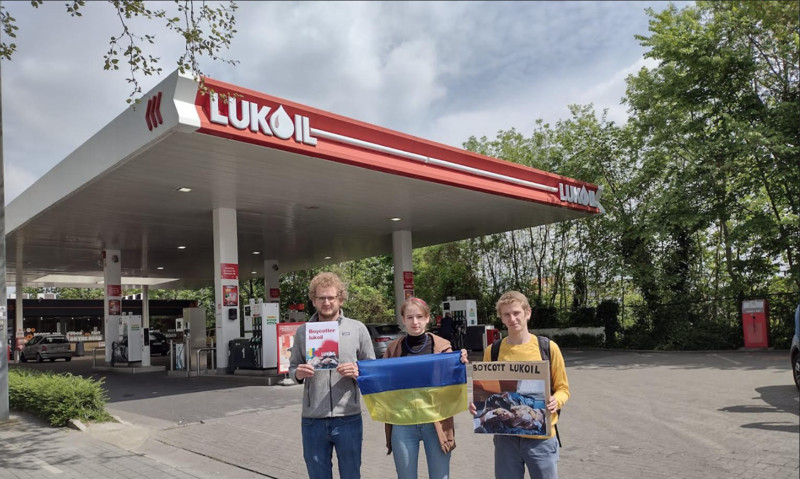 For one month now, the volunteers of NGO “Promote Ukraine”, armed with photos of dead Ukrainian civilians, have called on the public to boycott Lukoil petrol stations around Brussels.

Many of us, and many of you, will have seen the red-and-white Lukoil sign in your neighbourhoods.

However, as we found out during our Sunday protests, a lot of people do not know that Lukoil is Russia’s second-largest oil company with a market value of €49.5bn. At one of the gas stations, one woman told us “If I would have known it has any relation to Russia, I would not have come here today”.

Many also do not know that there are around 180 Lukoil stations in Belgium. The company entered the Belgian market in 2007. It expanded in 2009, just one year after Russia invaded Georgia, and added another 19 stations in 2014, the year when Russia invaded Crimea and started a war in Donbas.

Fast forward to 2022, and Russia is waging a full-scale invasion of Ukraine. Member states of the European Union are hesitating, debating, estimating financial losses, and then debating more, while continuing to pay €1bn a day for oil and gas to Russia.

In one of the meetings of our volunteers, we agreed that we need to speak out and take action at a local level.

After one month, we can now draw some conclusions.

First of all, we received a lot of encouragement from drivers and passers-by who regularly gave us thumbs up or commented on the good work we are doing. The best feeling for every volunteer that chooses to spend Sunday in front of a Lukoil station, is when drivers leave upon seeing our banners “One drop of Lukoil gasoline = One drop of Ukrainian blood”, “Lukoil finances Russian bombs that kill children” and “Stop buying Russian Oil!”.

At the same time, some, especially the owners of these stations, do not support our action.

One argument that we often hear is that “the calls for a boycott are unfair, because the vast majority of Lukoil stations in Belgium are managed by franchises. We have nothing to do with Putin and his regime”.

What is often not said, however, is that Belgian owners pay Lukoil for their franchises. This money ends up in the hands of Putin’s regime which needs it to finance the terrible and senseless war in Ukraine.

Another argument we hear is “the company reaffirmed its independence from the regime” referring to this statement.

However, in it, there is no condemnation of Putin’s war against Ukraine. Also, as some observers noted, it looks like an attempt to limit the international consequences because Lukoil has been heavily investing in its infrastructure and businesses around the world, including many in the West.

Simply put, they do not want to lose money and profits.

Some drivers also tell us that they would like to stop using Lukoil but they have company cards that allow them to fuel their cars for free. We have already sent letters to the companies asking them to change this and follow the example of Belfius Bank that deactivated the CarPay-Diem service for Lukoil petrol stations already on 1 March.

It is the ethical and corporate social responsibility of every company to stop assisting Russian companies in making profits that are used to finance the war machine.

On Lukoil’s official website it states: “We always guarantee you the lowest prices on the market”.

The moral and ethical question each customer should ask next time he/she is passing by Lukoil — are the few saved euros worth the lives of a raped woman or a killed child? We all know the answer to this question.

We, volunteers, believe in the power of individual actions each one of us takes every day. Therefore, we will continue to come to Lukoil stations in Brussels every Sunday.

There is still work to be done in convincing people that “the lives of women and men are more important than trade, jobs and energy”.

If you think the same, join us in your town, village and neighbourhood to boycott Lukoil and to stop financing the Russian war.