It comes after Sydney was hit by a violent storm cell yesterday, which brought flash flooding, lightning strikes and hail to the western suburbs.

Sydney’s west is once again in the firing line, with another storm forecast to hit parts of the Hunter and Illawarra.

The Bureau of Meteorology (BoM) detected the storm just after 11am.

“They are forecast to affect Blacktown, Erskine Park, Glenorie, Riverstone, Strathfield and Wollombi by 11:35 am and Sydney Olympic Park, Richmond, Windsor, the Yengo National Park northwest of St Albans, Cranebrook and Penrith by 12:05 pm.”

The BoM added heavy rain is likely to lead to flash flooding in these areas.

Another more general severe thunderstorm warning is in place for the Metropolitan and parts of the Hunter, Illawarra, Central Tablelands, Lower Western and Upper Western districts.

“Very dangerous thunderstorms are likely to produce intense rainfall that may lead to dangerous and life-threatening flash flooding over the next several hours in the Metropolitan and parts of the Hunter, Illawarra and Central Tablelands districts,” the BoM said.

Sydney’s western suburbs were the hardest hit when a furious storm cell bore down yesterday afternoon.

A home was set alight in the western suburbs of Glenmore Park yesterday after it was struck by a bolt of electricity.

No one was injured, but the house was all but destroyed.

In just half an hour, Penrith was smashed by wind gusts of 90km/h, flash flooding, torrential rain, hail and lightning.

Drivers were filmed navigating floodwaters in Penrith, with some forced to push vehicles to safety.

Overnight emergency crews have been cleaning up that damage.

This morning at least 3000 homes were without power.

Storms to be felt across three states

The BoM yesterday warned showers and storms would increase throughout the week.

The wild weather is the result of a surface trough, and will impact Queensland, NSW and Victoria.

“A surface trough lying across eastern inland Australia will trigger showers and thunderstorms through the week,” BoM wrote.

“The activity (will be) initially focussed across southern and central Queensland, eastern and northern NSW and eastern Victoria.”

Perth to swelter through extreme heat

Meanwhile in Perth, extreme heat will continue as the city is expected to topple heat records.

“The city is about to break its record for the most number of days at, or above, 35C in a single summer,” Weatherzone wrote.

“Sunday, February 20th, was Perth’s 31st day at or above 35C so far this summer. This is the equal highest number of 35C days on record for a single summer, matching the same feat in 1977/78. 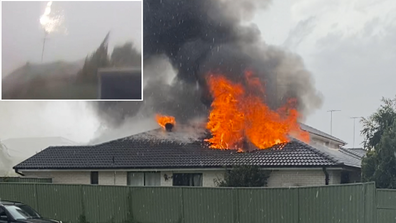 Today a maximum temperature of 34C is forecast for the city.

Here’s what the weather is doing around the nation’s capitals.

A maximum temperature of 30C will be felt in Brisbane.

Conditions will be partly cloudy.

There’s a slight chance of a shower, and the chance of a thunderstorm in the west early this evening.

Sydney will experience a high of 26C with more showers and storms forecast.

BoM said there’s a very high chance of rain, as well as the chance of a thunderstorm, “possibly severe”.

The mercury will climb to 25C in Melbourne today after a low of 12C.

A low of 13C will be felt in the nation’s capital, with temperatures climbing to 23C.

It will be cloudy, with a slight chance of a shower.

Those in Hobart will wake to a chilly 9C before the mercury reaches 21C.

It will be partly cloudy.

A maximum temperature of 28C will be felt in Adelaide today, after a low of 13C.

It will be a mostly clear day.

The mercury will reach 31C in Darwin, where there’s a medium chance of showers, most likely from the late morning.

BoM also forecasts the chance of a thunderstorm.

And lastly, it will be a hot and sunny day in Perth with temperatures set to reach 34C.