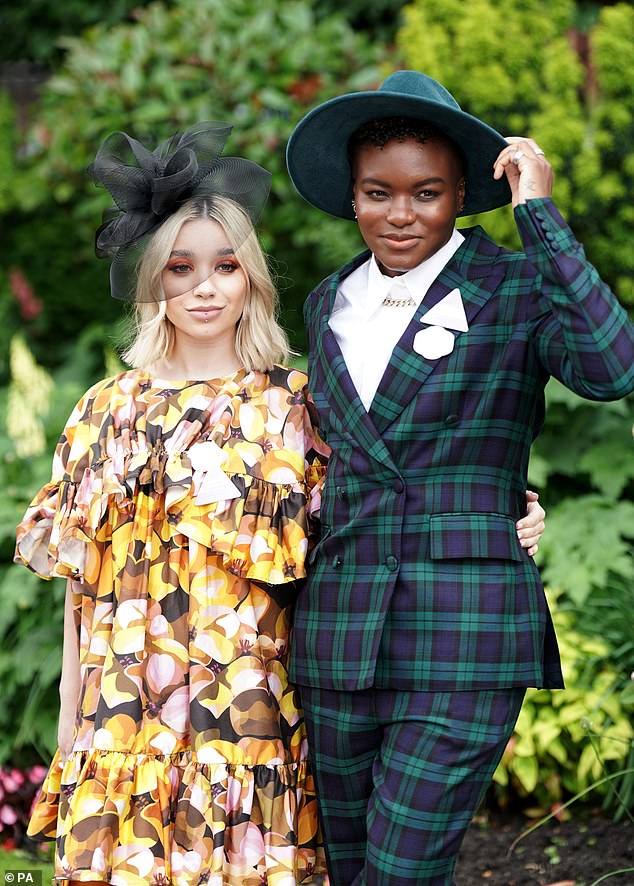 Nicola Adams rocked a smart plaid suit as she attended the final day of Royal Ascot with her pregnant girlfriend Ella Baig on Saturday.

The former boxer, 39, was dressed and booted in the fitted green and blue ensemble, cinched at the waist.

She teamed the look with a crisp white button down and black leather shoes, accessorizing the outfit with a wide brimmed hat.

Loved up: Nicola Adams rocked a chic plaid suit as she attended day five of Royal Ascot with her pregnant girlfriend Ella Baig on Saturday

Meanwhile, Ella showed off her growing bump in a yellow, pink and brown doll dress as she proudly posed with her boxer girlfriend.

Ella styled her platinum blonde locks in loose waves and carried a bright orange handbag, with a snake-like closure.

Growing bump: The model showed off her growing bump in a yellow, pink and brown doll dress

Chic: The former boxer, 39, was dressed and booted in the fitted green and blue ensemble, cinched at the waist

It comes after the beloved couple announced their pregnancy in February and recently revealed they are expecting a baby boy.

Last month, Ella showed off her blooming baby bump in a tight white dress as she posed in a sweet snap with Nicola.

She flaunted her changing shape in the photo as her girlfriend beamed beside her.

Stylish: She teamed the look with a crisp white button-up and black leather shoes, accessorizing the outfit with a wide-brimmed hat

Gorgeous: Meanwhile, Ella showed off her growing bump in a yellow, pink and brown doll dress as she proudly posed with her boxer girlfriend

Ella looked radiant in the chic dress which featured a one-shoulder design and clung to her gorgeous curves.

She wore her short blonde tresses in loose waves over her shoulders and opted for bronzed makeup while accessorizing with silver hoop earrings.

Meanwhile, next to her, Nicola looked elegant in a cream linen suit which had a plunging neckline and was paired with a gold necklace.

Meanwhile, Ella had recently hit back at trolls claiming she wasn’t the mother of her child after she shared cute photos of her baby last month.

The model took to Instagram to post snaps of herself in a gray dress cradling her burgeoning bump as she slammed online trolls for their hateful comments about her pregnancy.

In a lengthy caption, Ella said she and her former boxer girlfriend often see comments about their baby not really being theirs because it was “biologically impossible”.

Stunners: Ella styled her platinum blonde locks in loose waves as she sported a chic bob for the day

Ella fired back at the “cruel” trolls, asking why people couldn’t just be happy knowing their baby would be loved, rather than asking them about using IVF and a sperm donor.

The couple, who have been together for four years, conceived after their fourth round of IVF, having started fertility treatment in 2019.

In her Instagram post, Ella said she was aware that she and Nicola could not have had a child without medical intervention, but said the harsh comments from people were the reason there was a stigma surrounding IVF.

Glam: While Nicola kept her makeup simple with a dewy base and clean winged eyes, Ella, 24, stunned with a daring swipe of orange eyeshadow and dark lashes

She wrote: ‘Seeing many comments about it not being ‘our’ child because it’s ‘biologically’ impossible and we’re not the parents… we all know we couldn’t have do it without medical intervention, trust me I know.

“But it makes me think that’s why there’s such a problem around IVF and fertility because people are so cruel. Just because a child isn’t biologically yours and wasn’t created “naturally” doesn’t mean they aren’t your child!

“Why can’t people just be happy knowing the child will be loved and wanted.”

Waiting: Ella Baig pregnant with her blossoming baby bump in a skin-tight white dress as she posed in a beloved snap with girlfriend Nicola Adams in May

Trolls: Ella recently hit back at ‘cruel’ comments, asking why people can’t just be happy knowing their baby will be loved, rather than quizzing them about using IVF

Ella also criticized people for giving Ella a hard time when there are dads who don’t “stay on to do the job” as parents, comparing absentee dads to sperm donors.

“Too many children are born with so-called parents who are nothing more than givers…not parents. But we’re given a hard time?!’ she says.

“He’s a giver like all the men here who make babies and don’t stay to do the work!” You really need to learn the difference.

Sweet: This comes as the couple adored in February announced their pregnancy and recently revealed they were expecting a baby boy