A new species of crocodile dating back to the Cretaceous period has been discovered in Queensland, and its last meal was a young dinosaur, scientists say.

The fossilised bones of a confractosuchus sauroktonos were excavated in 2010 from a sheep station near the Winton Formation, a geological rock bed that is about 95 million years old.

Inside the stomach of the 2.5m-long crocodile, scientists identified the partly digested remnants of a young ornithopod, according to a paper naming the new species published in the scientific journal Gondwana Research on February 11.

This is the first evidence of a crocodile preying on a dinosaur in Australia, the Australian Age of Dinosaurs Museum, which made the discovery, said in a statement.

The crocodile sample, which was initially preserved in a siltstone mass, had been partially crushed. However, the damage revealed a number of small bones from the skeleton of a small Cretaceous creature.

Scientists used X-ray and CT scanning technologies to locate the bones inside the crocodile specimen, as well as 10 months of computer processing to produce a 3D reconstruction of the bones.

With 35 per cent of the freshwater crocodile preserved, researchers were able to recover its near-complete skull. While they were unable to classify the young dinosaur inside its stomach, they described it as a juvenile weighing nearly 1.7kg.

The crocodile had killed the animal, or foraged it soon after its death, the press statement said.

Such a discovery is “extremely rare, as only a handful of examples of dinosaur predation are known globally,” researchers said.

“While confractosuchus would not have specialised in eating dinosaurs, it would not have overlooked an easy meal, such as the young ornithopod remains found in its stomach,” Dr Matt White, an associate at the museum who led the research, said in the statement. 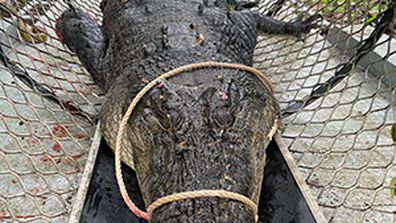 “It is likely dinosaurs constituted an important resource in the Cretaceous ecological food web.

“Given the lack of comparable global specimens, this prehistoric crocodile and its last meal will continue to provide clues to the relationships and behaviours of animals that inhabited Australia millions of years ago.”

The confractosuchus sauroktonos is the second crocodile that has been named from the Winton Formation. The rock bed has exposed numerous scientific discoveries in recent years, including a 96-million-year-old pterosaur in October 2019.