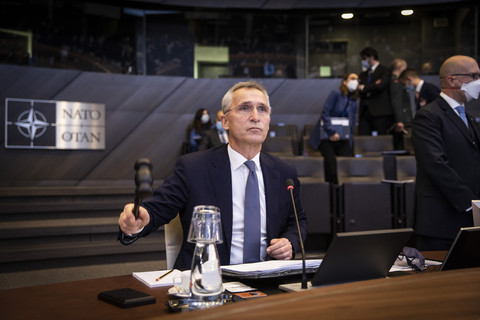 The US and Nato have formally rejected Russia’s demands to withdraw Western forces from eastern Europe and abandon Ukraine.

“We cannot and will not compromise on the principles on which the security of our alliance and security in Europe and North America rest,” Nato secretary general Jens Stoltenberg said on Wednesday (26 January).

“This includes the right of each nation to choose its own security arrangements. Russia should refrain from coercive force posturing, aggressive rhetoric, and malign activities directed against allies and other nations,” he added.

Nato, the same day, “in parallel” with the US, conveyed “written proposals” to Russia for new security arrangements in Europe, Stoltenberg said.

The Western proposals included reopening Russia-Nato embassies in Brussels and Moscow and making more use of “military-to-military channels of communications” to reduce the risk of an accidental clash.

But they fell far short of Russian president Vladimir Putin’s demands, issued last December, and they underlined that Ukraine was free to seek Nato membership whether Putin liked it or not.

“This is about respecting the right for self-determination,” Stoltenberg said.

And Nato was sending more troops, fighter jets, and warships to the east in reaction to Russia’s aggressive posture, Stoltenberg added, instead of withdrawing from the region, as Putin had demanded.

“We are removing any question about our ability to defend and protect all allies by increasing the presence in the eastern part of the alliance,” Stoltenberg said.

Stoltenberg nodded to the outlandish nature of Russia’s earlier demands, which many Western commentators saw as a propaganda hoax.

“There’s no secret that we are far apart,” Stoltenberg said.

“Tensions are increasing. Russia continues its military build-up. And we see also more troops not only in and around Ukraine, but also now in Belarus … and this takes place under the disguise of an exercise,” he added.

“We are not naïve,” Stoltenberg said.

“We are hoping for, and working for, a good solution, de-escalation, we are also prepared for the worst,” he said.

Meanwhile, the US version of the Western proposals were personally handed over by the US ambassador to Moscow, John Sullivan, at the Russian foreign ministry on Wednesday for greater effect.

“Putting things in writing is … a good way to make sure we’re as precise as possible,” US secretary of state Antony Blinken said.

“It remains up to Russia to decide how to respond … We’re ready either way”, he said.

The West had offered Russia “a serious diplomatic path forward, should Russia choose it”, he noted.

“There should be no doubt about our seriousness of purpose when it comes to diplomacy, and we’re acting with equal focus and force to bolster Ukraine’s defences and prepare a swift united response to further Russian aggression,” Blinken said.

The US and EU earlier promised “massive” economic sanctions against Russia if it attacked Ukraine once again.

But if Russia cut off EU countries’ gas supplies in retaliation that would have “profound economic consequences” for Europe, according to a study by the Brussels-based Bruegel think-tank out Thursday.

Some EU states would need emergency curbs on demand, such as stopping factories, Bruegel said.

“Such a war-scenario would imply difficult and costly decisions for Europe,” Bruegel’s Simone Tagliapietra told Reuters.